Due to the differences between western Oceania, with large, resource-rich islands separated by relatively short stretches of open water, and the area east of the Andesite Line (from Solomon Islands to Tonga) with myriads of small islands, often separated by very large distances, the prehistory of the continent can be managed at least 50,000 years back in Australia and New Guinea but only about a thousand years back in the far east. Oceania was originally populated via Southeast Asia. The immigrants probably brought pets and some cultural plants; inter alia suggests the presence of pigs in Melanesia some 10,000 years ago suggests that animals and plants were early crossed over the Wallace line. Horticulture of native species such as sugar cane, yams and banana species, sago and screw palm is likely, as well as agriculture and irrigation, even older ancestry. The staple diet consisted of root plants such as taro and jams, later also batat (which probably reached eastern Oceania from South America). In Micronesia and Polynesia, tree fruits (coconut, breadfruit) were also very important. Prehistoric metalworking did not occur, but ceramic production was early widespread, especially in Melanesia; however, it died out on some islands and did not reach all.

Emigration routes, trade contacts and relationships between cultures are still hotly debated issues; linguists and archaeologists rarely get the same results. However, early exchange of goods covered wide distances. From about 1500 BC Oceania’s now well-developed maritime culture allowed groups of colonizers to quickly reach all of Polynesia. Gradual isolation led to differences in economy and social order: in Melanesia small communities and few rank differences, in Polynesia large-scale settlements and a developed social hierarchy. In Micronesia, where several islands exhibit extensive megalithic structures, the latter type of development seems to have dominated.

The climate takes into account two main factors: the average temperatures and the average amount of precipitation. The average temperature refers to the averages for each month and their seasonal variation. The pluviometric index measures the amount of monthly precipitation and its seasonal variations. Both factors are influenced by different characteristics of the location, such as sunshine and humidity. The level of sunshine, or level of solar energy, is given mainly by latitude, largely controlling the temperature of the place. The altitude of the relief, the proximity or not of large bodies of water ( maritimity/continentality), atmospheric pressure and sea currents, also influence the humidity that a region receives and its temperatures.

The Oceania can be divided into two parts. The first is the continental whose only country is Australia. The second is the island portion, which comprises countries like Papua New Guinea, New Zealand, East Timor, in addition to numerous archipelagos of small islands such as Fiji, Tonga, Tuvalu, among others.

Climates in the island region, except in New Zealand, are considered warm and tropical climates. The climate that covers most of the islands and a small part in northern Australia is that of tropical rain forest, with high temperatures and little variation. The climate also has high humidity, resulting from high temperatures and proximity to the ocean, which makes the rainfall rate high throughout the year. A small portion is affected by the tropical monsoon climate, with a dry season (from one to six months) and a wet season (from six to 11 months), with high temperatures and little variation. In the center of Papua New Guinea, we find the mountain climate, less severe than in subtropical regions or regions with higher altitudes. In the region, this climate is dry and with milder temperatures.

Another tropical climate is that of savanna, found in northern Australia. Get population information about Australia on Countryaah.com. This climate has two seasons, with humid summers and dry winters, and warm temperatures with little variation.

Mesothermal climates (subtropical) are found off the coast of Australia, except the west, and New Zealand. We find in the Australian Northeast a small portion of land under the influence of the humid subtropical climate of dry winters, with four well-defined seasons, a hot summer with a high rate of precipitation, and a mild, dry winter. This variation comes from the monsoon effect, which creates a high pressure area in winter, making the weather dry. The central east coast of Australia has well-distributed rainfall throughout the year, with four well-defined seasons, a typical humid subtropical climate of hot summers. The maritime climate of the west coast is found in southeastern Australia and throughout New Zealand, with four well-defined seasons, summer and mild winters, and well-distributed rainfall throughout the year. Australia’s southern coast is dominated by Mediterranean climate of dry summers, where, contrary to the global average, precipitation is concentrated in winter. This is due to the cold sea current in eastern Australia and the movement of high pressure zones in the summer, which prevent moisture from accumulating in southern Australia.

Desert climates are found in central Australia, where a subtropical high pressure zone prevents moisture-laden winds from entering the continent. The Australian desert is a typical subtropical desert, with rainfall concentrated in the summer, less than 350mm per year, and seasons that vary between a very hot summer and a mild winter.

Austronesians immigrated around 4000 BCE. and the so-called Lapita people with special pottery came from the Bismarck Islands between 1200 and 800 BCE. Spanish sailor Álvaro de Mendaña de Neira came as the first European to the Solomon Islands in 1568, found some gold and named the islands after King Solomon. Neira returned in 1595, died leaving a short-lived settlement.

It was 200 years before Solomon Islands, notorious for head hunters and cannibalism, were again visited by Europeans. In the 1850s, the Anglican Church initiated a mission to the islands. In 1888, Britain and Germany took control of each part of the Solomon Islands. In 1893, Germany left most of the islands to the United Kingdom, which established a protectorate over the southern islands. In 1900, the protectorate was expanded with the rest of the archipelago except Buka and Bougainville, which remained part of German New Guinea. In 1920, the Solomon Islands came under Australian jurisdiction.

In 1942, the Japanese conquered the Solomon Islands. The departure of US forces at Guadalcanal and Tulagi in the fall of the same year began to lead to fierce fighting. Following the defeat of the Japanese fleet by the Solomon Islands in November 1943, US forces gradually conquered the islands. In February 1944, all the islands were recaptured and the United States regained control of the Pacific.

After the war, the Solomon Islands became British again. They gained internal autonomy in 1976 and became an independent state in 1978.

An ethnic conflict between two peoples broke out in 1998. Civil war-like conditions led to deeper poverty. In July 2003, a multinational force landed in the largest military action in the Pacific after the war and restored peace the following year. In 2005, Australia was at the forefront of a civilian recovery program. Following new turmoil in 2006, Australian forces stabilized conditions.

A cyclone that hit the Solomon Islands in April 2004, and a tsunami following an earthquake in 2007 left many thousands homeless. 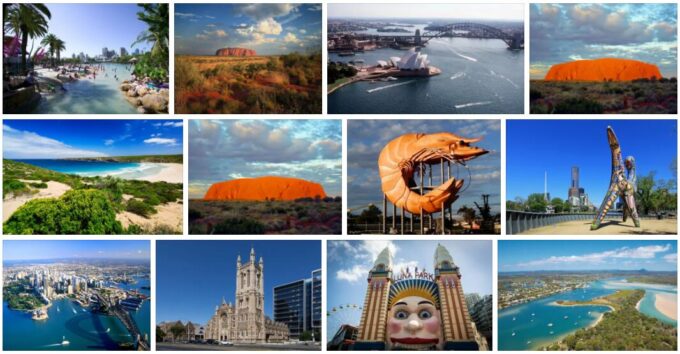