Tonga. In August, the OECD removed Tonga from its black list of countries that allow money laundering.

An American businessman with ties to the court disappeared in October with the $ 26 million he would have invested on behalf of the Kingdom. Two ministers were forced to resign. The money had been raised by selling Tongan passports to Hong Kong Chinese in particular during the 1980s.

The 82-year-old King Taufa’ahau Tupou IV ‘s health appeared to be failing and he traveled to New Zealand in the fall to be treated for heart problems. A power struggle over control of the country was already said to take place between Crown Prince Tupouto and Princess Pilolevu Tuita.

Tonga – meaning South in several Polynesian languages ​​- was populated over 1,000 years ago by immigrants from Samoa. The Tongas developed a socially advanced structure in the midst of which the monarch existed. According to oral reports, the first monarch of the islands was Ahoeitu in the second half of the 10th century. In the 15th century, the religious and civil functions of the monarch were separated, which explains why the islands had two monarchs when the first Dutch seamen arrived in the islands in 1616. In 1773, British explorer James Cook named the islands “Friendly Islands”.

After a civil war, the archipelago recovered its political unity in the mid-19th century, which it had lost in the late 18th century. King Taufa’ahau Tupou managed to gather the kingdom aided by European missionaries and conquered Vavau and Tongatapu. Taufa’ahau (John I after he was baptized) introduced a parliamentary system and implemented a land reform that gave each adult male 3.3 hectares of arable land. This land distribution still exists, but since there is no additional land to distribute, families divide the land.

In 1889, Britain and Germany signed a treaty under which the British could freely dispose of Tonga. In 1890, the archipelago was transformed into British “protectorate” and the monarchy was retained with limited powers.

Queen Salote – granddaughter of Taufa’ahau and recognized for his height, which is the criterion for the nobility in Tonga – was crowned in 1918 and in 1960 gave women the right to vote in parliamentary elections.

The British replaced subsistence agriculture and fishing – the traditional occupation of the Tongans – with the cultivation of copra and bananas.

In 1967, the current king, Taufa’ahau Tupou IV was crowned and in 1970 the country gained its independence. Rising prices for its export products made it possible to introduce a social insurance system and to provide the entire population with free education and health care.

As banana prices dropped in the mid-70s, it led to the exodus of 10,000 Tongans to New Zealand. The country has since undergone a difficult period: inflation is high, unemployment is high despite the emigration, trade deficit is high and there are a number of natural disasters such as the cyclone Isaac, which in 1982 destroyed part of the plantations.

In February 1990, supporters of reform in the country were re-elected, announcing the formation of the kingdom’s first political party. The king accused the leader of the movement, Akalisi Pohiva, of sympathizing with Marxism.

The UN criticized the responses the Tongan government had given to the question of the reasons why there are no trade unions in the country, despite the fact that there are 3,000 public servants. The government had declared that the unions did not exist because they were not “necessary”. 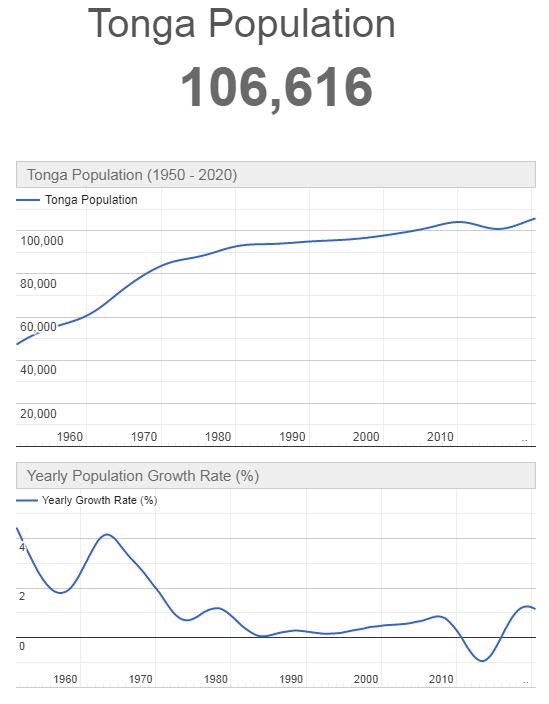