Turkey. The year was marked by Turkey’s difficult economic crisis. The stock index collapsed in February after President Ahmet Necdet Sezer accused Prime Minister B邦lent Ecevit of protecting three corruption-suspected ministers in his government. $ 5 billion flowed out of the country in just a single day, February 19, and interest rates rose to 4,000% year-on-year. On February 22-23, the government was forced to drop the fixed exchange rate and allow the currency, the lira, to float. The value of the lira was devalued by almost 40%. The country’s interior minister, Recep Önal, who was responsible for the country’s economic policy, resigned and was succeeded by former World Bank economist Kemal Dervish, who on March 14 presented a plan for the country’s economic recovery. The IMF (International Monetary Fund) granted loans worth $ 10 billion in addition to the 7.

Parliament voted on October 3 through 34 constitutional amendments dedicated to adapting Turkey to the EU. The death penalty may in the future only be used for persons convicted of terrorism or for certain other crimes committed during wartime. Radio and television broadcasts in Kurdish are allowed, but only if they are not considered a threat to the security of the nation. The military’s influence in the National Security Council is limited and “state hostile statements” are no longer punishable. The changes would have to be approved by the president before they could take effect. On November 26, Parliament also voted in favor of legislative changes that equate married spouses legally. Those changes would come into force on 1 January 2002.

On June 22, the Constitutional Court banned the country’s dominant opposition party, the Islamist Customs Party (Fazilet Partisi, FP), as it was deemed to undermine the country’s secular order. Two of the party’s more than 100 MPs lost their seats; the others could remain as independent members. Two new Islamist parties, the Joy Party (Saadet Partisi) and the White Party (Ak Partisi), were formed in the wake of FP.

A former police chief and a former intelligence officer were sentenced in February to six years in prison was for leading a criminal group with the aim of “creating panic in society”. Twelve other suspects were sentenced to four years in prison were for involvement in the same business, the so-called Susurlik business in 1996, when the links between the country’s political establishment and right-wing terrorists were revealed.

On April 22, 13 armed men took 120 hotel guests hostage at a hotel in Istanbul. The action was an attempt to draw the world’s attention to the war in the Russian breakaway republic of Chechnya. The drama ended after twelve hours when the men gave up. No one was injured.

A total of 71 people were killed when two CASA CN-235 military aircraft crashed in Turkey on May 16 and 18, respectively.

1918 The collapse of the Ottoman Empire

During World War I, Turkey allied with the German Second Reich and the Austro-Hungarian Empire, and with them it collapsed. The Ottoman Empire collapsed, and in the Arabian Peninsula and the Balkans many small autocratic states emerged. The ethnic minorities within Turkey’s own borders were severely suppressed. In 1915, some 800,000 Armenians were killed during what has been called “the first century genocide”.

The conditions imposed by the Treaty of Sèvres in 1920 were so humiliating that the military commander Mustafá Kemal (later known as Kemal Atatyrk) deposed Sultan Mohamed VI, who had signed the agreement, and launched a national liberation war. In the end, he obtained a new treaty signed in Lausanne in 1923. The country was exempt from having to pay war damages and the privileges granted to foreign traders (called “capitals”) were revoked. On the other hand, the Bosphorus Strait and the Dardanelles were declared international waters, which should be navigable in peacetime by boats from all countries.

Atatyrk proclaimed the republic and introduced a new constitution. The government initiated a process of rapid modernization, church and state were separated, Friday as Muslim holidays were abolished, and Sunday was instead made public, the Arabic alphabet was replaced with the Latin, and the women were ordered to abandon the veil.

After Atatürk’s death in 1938, the military retained its influence on Turkish politics. The government crushed the left-wing groups that had grown under the influence of the Russian Revolution and during the fight against neo-colonialism.

After World War II, the country became the United States’ ally and was transformed into an anti-Soviet bastion. The United States built large military bases on Turkish territory, and gradually the nationalist military doctrine was replaced by the Pentagon’s concept of “national security.” Following the influence of the United States, Turkey introduced a multi-party system and provided incentives for foreign investment. Although the economy continued to depend on agricultural exports, there were no longer enough jobs in rural areas, and the young people therefore began to emigrate to the cities and countries of Western Europe – especially West Germany.

The Turkish military invasion of Cyprus in 1974 led to the island’s division, prompting the withdrawal of Social Democratic Prime Minister Bulent Ecevit. Conservative Suleiman Demirel subsequently won over Ecevit, but the rivalry between both leaders hampered the formation of a stable government for the rest of the decade.

Kavala remains in custody without trial

Osman Kavala, who has been imprisoned for more than three years without a conviction, will be brought to justice on 5 February. Until then, he will remain in custody, a court in Istanbul decides. The businessman Kavala has collaborated with the culture and education patron George Soros, who has worried several regimes in Eastern Europe (see 21 November 2018). Through his activities, Kavala has challenged Turkish President Erdoğan. He has been acquitted of charges related to demonstrations in a Istanbul park, but is instead accused of subversive activities and espionage and is threatened with life imprisonment (see 18 February 2020). The Constitutional Court will rule on December 29 that it is legal to continue keeping Kavala in custody.

Due to Turkey’s purchase of the Russian – made air defense system S-400 before the United States before sanctions against the Turkish Defense Materiel Administration (see October 16). Like NATO, Turkey is not expected to make such purchases; Cooperation with Russia on the development of weapons systems is seen as a security threat to military personnel and the manufacture of military equipment in NATO countries. The United States is now stopping all export licenses for the sale of US military equipment to Turkey. The United States has previously excluded Turkey from co-operation on the F-35 fighter jet (see 17 July 2020).

Iran is singled out for kidnapping separatists

Turkish police confirm that eleven people have been arrested on suspicion of, among other things, espionage and kidnapping on behalf of Iran. The detainees are Turkish citizens. There is a disappearance behind the arrest: Habib Chaab, who lived in Sweden but was accused of having links to Arab separatism in Iran, is believed to have been abducted from Istanbul and smuggled to Iran in October. In southwestern Iran, there is an area of ​​Arab population around the city of Ahvaz. There are political movements acting in the name of the Arabs, a conflict that has also led to the hunt for suspects in Europe (both separatists and the Iranian regime’s envoys, see 22 September 2018 and 30 October 2018).

The EU is preparing sanctions

EU Heads of State and Government decide to draw up a list of appropriate sanctions against Turkey. The reason is Turkey’s actions regarding as yet unexploited oil and gas reserves in the eastern Mediterranean, which in EU circles are perceived as provocations (see 13 September and 5 October).

Erdoğan in place when Azerbaijan celebrates

President Erdoğan is taking part in Azerbaijan’s celebration of the victory over Armenia in the recent Nagorno-Karabakh war. In a military parade held in Baku, drones of Turkish manufacture are among the equipment on display. On the same day, Amnesty International calls on both Azerbaijan and Armenia to investigate allegations of war crimes; such accusations are leveled against both sides.

A night curfew on weekdays and a shutdown of the community during the weekend will be introduced to curb the spread of the sars-cov-2 virus. After 188 reported deaths the day before, Turkey’s total death toll has reached 13,746 (compare 28 October). On December 10, the death toll will be revised and updated to 15,751. 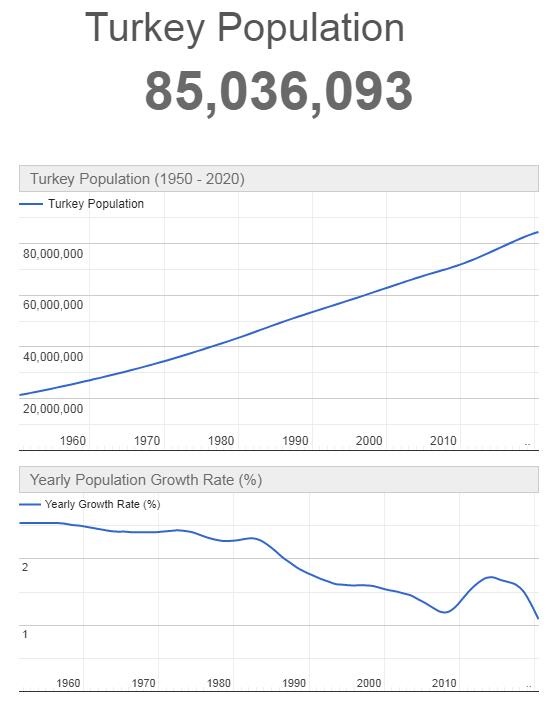