The most beautiful regions in Mecklenburg-West Pomerania

vacations at the beach

According to Computerdo.com, the Baltic Sea is the most popular travel destination for Germans in their own country. Part of the coast belongs to Schleswig-Holstein , the other to Mecklenburg-West Pomerania.

In Meck-Pomm there are fantastic holiday islands such as Rügen or Usedom, but also great coastal towns such as Kuehlungsborn or Wismar .

There is a second region in Mecklenburg-Western Pomerania that is one of our favorite nature travel destinations in Germany: the Mecklenburg Lake District.

Over 1000 lakes and eight national parks are part of the beautiful, idyllic landscape. Including the Müritz National Park, which is particularly popular.

The most beautiful islands in Mecklenburg-West Pomerania

A long section of Mecklenburg-Western Pomerania borders on the Baltic Sea and therefore attracts many holidaymakers to the federal state, especially in summer. The Baltic Sea islands are particularly popular , of which there are a total of six in Meck-Pomm.

The largest island in Germany

Rügen is a very popular Baltic Sea travel destination for Germans. The island is great, especially for families.

There are great attractions for children here. For example, a ride on the Rasender Roland – the narrow- gauge railway from Rügen – is something very special.

The absolute highlight, however, are the chalk cliffs in the Jasmund National Park.

Half Germany, half Poland

Usedom is in the far east of Germany and the island has the longest beach promenade in Europe .

If you want to walk the promenade completely, you can even walk to Poland .

Usedom is particularly well-known for its piers and the so-called imperial baths: Heringsdorf, Ahlbeck and Bansin.

The Fischland Darß-Zingst is actually just a peninsula. But you also get the holiday flair of a real island here.

What is special about Darß-Zingst is that the peninsula largely consists of a lagoon landscape .

The Western Pomerania Lagoon Area National Park not only attracts holidaymakers to the popular holiday island, but also countless cranes, which like to stop here, especially in autumn.

Three other Baltic Sea islands belong to Mecklenburg-Western Pomerania. Two of them are west of Rügen: Ummanz and Hiddensee. The island of Poel is located north of Wismar.

Are you planning a vacation to the Baltic Sea and want to learn more about the different islands? Then take a look at our Baltic Sea Islands article.

The most beautiful cities in Mecklenburg-West Pomerania

With so much beautiful nature, it’s easy to forget that there are also beautiful cities to see in Mecklenburg-Western Pomerania. Here are our tips for a city trip:

With just under 100,000 inhabitants , Schwerin is the smallest state capital in Germany.

The city is located directly on the beautiful Lake Schwerin and it is only about 50 kilometers from Schwerin to the island of Poel on the Baltic Sea.

The highlight is the city’s landmark: Schwerin Castle.

The largest city in the state

Rostock is located almost directly on the Baltic Sea – it is only 10 kilometers to the beautiful coastal town of Warnemünde.

Rostock is therefore perfect for a city trip if you are on holiday by the sea. The historic old town with its pretty, colorful houses is particularly beautiful.

A great activity in Rostock is the sunset catamaran tour.

Wismar is located between the island of Poel and the city of Schwerin on the Baltic Sea .

In Wismar you can stroll through the beautiful old town. You will pass many cute houses.

The ” Red House ” is particularly well known – a cute half-timbered house that is a listed building.

The university and Hanseatic city

Greifswald is also on the Baltic Sea coast – between the islands of Rügen and Usedom.

The city is home to the largest museum harbor in Germany. More than 50 ships are anchored here.

In addition, Greifswald has a very beautiful market place with cute brick houses, as well as the well-known Eldena monastery ruins.

Stralsund is right in front of Rügen – so you can make a great stop here before you head to the holiday island.

In the city is the Ozeaneum Stralsund , which is especially great for children.

On a tour of the beautiful old town you will also get some really cool insider tips.

The most beautiful sights in Mecklenburg-West Pomerania

The largest inland lake in Germany

Actually, Lake Constance is much larger than the Müritz, but since it is not entirely in Germany, the Müritz is the largest inland lake in Germany with an area of ​​117 km² .

The Müritz impresses not only with its size but also with its beauty. Whether on the boat from the water or from a hiking trail – the views of nature are beautiful from everywhere.

Fairytale castle in the state capital

The castle is the pride of Schwerin . And you can really be proud of it – because the building is beautiful.

It doesn’t matter whether it’s day or night, Schwerin Castle is a great photo opportunity at any time of the day .

A walk through the castle garden and the castle park is also worthwhile.

In the Jasmund National Park

You have a great view of it from the Victoria View viewing platform. The most famous rock in the national park is the Königsstuhl.

A beautiful beach on the chalk cliffs is the pirate gorge.

The Nienhagen Ghost Forest looks spooky, especially at dusk and at night. You can interpret a lot into the shapes of the trees and branches.

By the way, the forest is also a great photo motif – especially at sunrise and sunset you can take great pictures here.

The ghost forest is located in Nienhagen – a small town west of Rostock . 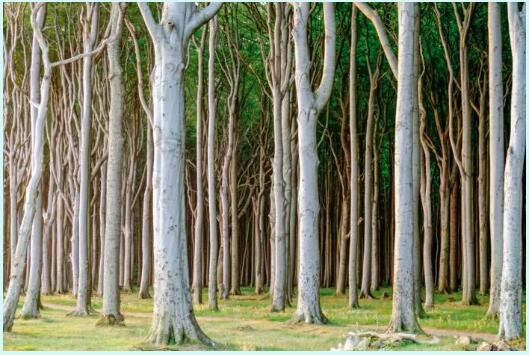