Slovakia. Despite internal contradictions, the February coalition succeeded in gaining a majority in Parliament for important constitutional changes necessary for the country’s forthcoming EU membership. Among other things, strengthened the independence of the judiciary. Commissioner Günter Verheugen said during a visit to Bratislava that it was possible that Slovakia could be involved in the first phase of the Union’s planned enlargement to Eastern Europe.

Already in April, a backlash came when the EU suspended the payment of aid to Slovakia. It was then that a senior Slovak government official, who maintained EU support, was dismissed on suspicion of misuse of funds. The support would have amounted to the equivalent of SEK 1.3 billion during the year but was held pending the Slovak investigation into the case. The decision was a serious hardship for the government, which was allowed to start negotiations on EU membership only in 2000 and who then endeavored to reach its neighbors on EU alignment.

In March, Parliament confirmed Slovakia’s quest for membership in the NATO military alliance, which led to a negative reaction from Moscow. Slovakia’s neighboring countries The Czech Republic, Poland and Hungary became NATO members in 1999.

In June, Slovakia expressed concern over a new Hungarian law granting special rights to ethnic Hungarians living in Hungary’s neighboring countries, including in Slovakia. The law gave the right to education, work and free health care in Hungary. Slovakia’s Deputy Foreign Minister described the law as a step backwards, pointing out that it only targets neighboring countries and not the rest of Europe. 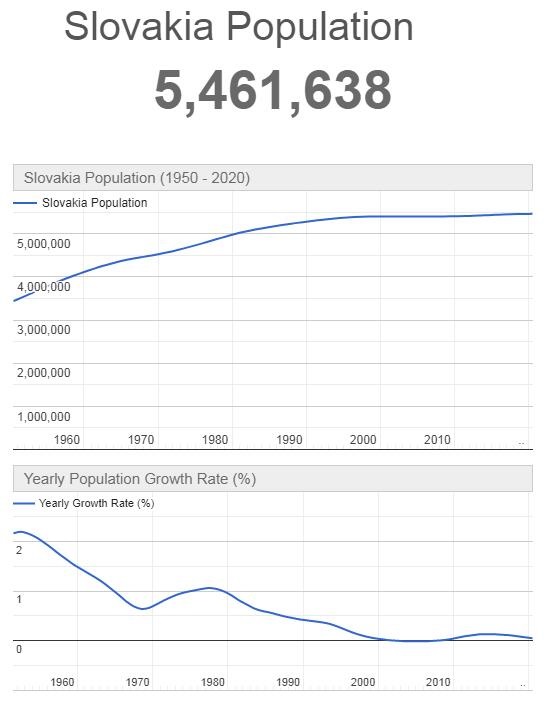 Slovakia is a Central-eastern European state. It borders Poland to the N, Ukraine to the E, Hungary to the S, Austria to the SW and the Czech Republic to the NW.

The territory is closed to the North by a stretch of the Carpathian chain, which culminates at over 2600 m with the peaks of the High Tatras, shaped by glacialism. Towards the S, the Váh and Hernád valleys separate the Highs from the Low Tatras (2043 m), formed by sandstone and mainly wooded, while further south still, separated by the Hron river valley, the Paleozoic relief stretches for over 100 km of the Slovak Ore Mountains (1458 m), with less harsh shapes. To the SW the Slovakia includes a strip of the Danube plain, to the left of the river, which in this section marks the border with Hungary. ● The climate is continental, with hot summers and dry winters. The rainfall, more abundant in the summer months, is around 650 mm per year.

The population is largely composed of Slovaks (85.8%); among the minorities, the most numerous are the Hungarians (9.7%), followed by the Roma (1.7%), the Czechs (0.8%) and small groups of Ukrainians, Poles and Germans. Until the second post-war period, the Slovakia was characterized by a strong demographic dynamism, which fueled an intense emigration to the richest European countries and to the United States. Subsequently, the population growth rate gradually decreased to around 0% (years 2001-08). The settlement structure is centered on a network of small and medium-sized cities: apart from the capital and Košice, the second economic pole of the country, no other city has more than 100,000 residents. ● The prevalent religion is Catholic (68.9%) with Protestant (10.8%) and Greek-Catholic (4.1%) minorities;