Portugal. The year began with the presidential election January 14. Jorge Sampaio was re-elected by a good margin to a second five-year term in the post.

Two serious traffic accidents in March led to the resignation of Jorge Coelho, Minister of Infrastructure and Transport. More than 50 people were killed when a 200 meter long road bridge collapsed across the Douro River outside Porto. A two-storey bus and at least two passenger cars crashed into the river, which was flooded due to heavy rain. It soon became apparent that local authorities had on several occasions warned central officials that the bridge was in miserable condition but that no action was taken. Public outrage grew even more when a bus accident later that month on a notorious stretch of road in northern Portugal claimed 14 lives and injured 25. The bus slipped in heavy rain off the road, called the Death Road, into a 200-meter deep ravine.

Coelho’s responsibilities were taken over by Social Minister Eduardo Ferro Rodrigues. Harsh criticism from the opposition to economic policy and increasingly strong demands for new elections caused Prime Minister Guterres to make a number of remodels in the government in the summer. The most notable was a change at the Finance Minister post.

A new drug law came into force on July 1, which decriminalized all previously banned drugs and classified drug abuse as a social problem and health problem rather than as a crime. With this, the government hoped that addicts could more easily access health care and that the police could focus their work on accessing the crime syndicates that control drug trafficking.

On July 31, Francisco da Costa Gomes, 87 years old, passed away in 1974–76. He had a leading role in the bloody coup in 1974 and led the country through the difficult transition from the chaos of the revolution to a modern democracy.

After a stinging defeat in the local elections in December, the ruling Socialist Party leader, Prime Minister António Guterres, filed his resignation application. Among other things, the socialists lost power in the big cities of Lisbon and Porto. The faltering economy was considered to be the cause of the setback. Since no other member of the Socialist Party assumed the prime ministerial role and it was also clear that no other party or party coalition would be able to form a government, President Sampaio decided to dissolve parliament and announced new elections until March 17, 2002.

Oceanic climate and Mediterranean climate. The north is shaped at the Atlantic, towards the south it becomes increasingly Mediterranean.

Summers are hot and dry (24 ° C in July), winters are mild and humid (10 ° C in January. Temperatures increase from north to south. Precipitation decreases from north (over 2000 mm) to south (300 mm). 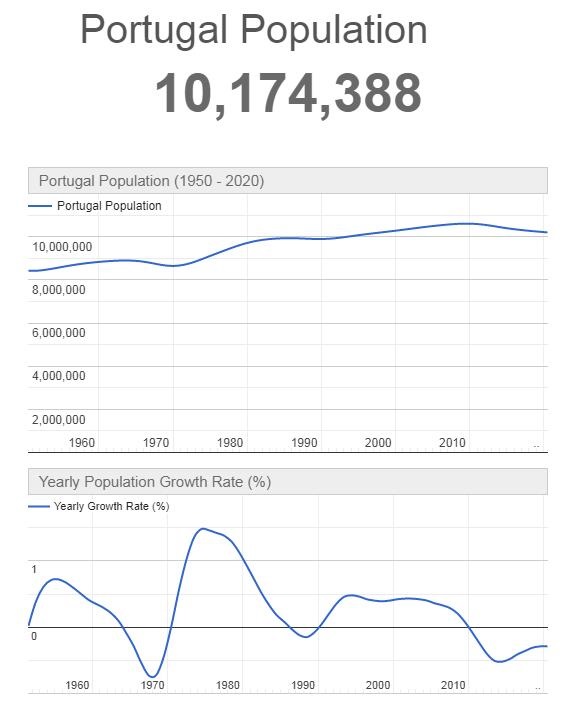