Poland. Poland’s complicated relationship with former Jewish persecution became a major topic of public debate during the year. In Jedwabne, northeast of Warsaw, in May a mass grave was excavated with the bodies of hundreds of Polish Jews massacred in July 1941. Earlier, German Nazis had been accused of the massacre, but newly published information showed that Polish neighbors burned the victims inside a barn. President Kwaśniewski, on behalf of the Polish people, apologized for the massacre but was severely criticized by church officials, who claimed that Germans were the culprits.

Heavy rains during the summer caused severe flooding around the Wisła River in southern Poland. At least 30 people were reported to have died in the disaster, and more than 16,000 people were evacuated from their homes. The flooding helped to increase the already difficult economic problems for the government, which has long seemed to be paralyzed by internal conflicts. around the privatization policy. Previously good growth had slowed down, unemployment reached 16%, and the deficit in the state budget grew to around 10%.

Finance Minister Jarosław Bauc presented a tough austerity program, which led to his dismissal in late August. Prime Minister Jerzy Buzek’s minority government, with the Solidarity-led and fragmented right-wing Alliance AWS, seemed to have lost control of economic policy. In addition, negotiations with the EU on Polish membership tightened. It was therefore not surprising that the Left Opposition won a major victory in the general elections in September, while the ruling AWS resigned from Parliament. Solidarity, which led Poland out of communism, had reigned. The Democratic Left Alliance SLD received 41% of the vote and 216 of the 460 seats in the Sejm. Then the newly formed right-wing Liberal Party followed the Citizens’ Platform, which took 65 seats. The militant peasant leader and EU enemy Andrzej Lepper’s Self-Defense Party surprisingly came in third place with 53 seats. Less than half of the voters participated in the election, which was the lowest figure in Poland’s democratic history.

The SLD leader and new Prime Minister Leszek Miller formed a coalition with the Polish Peasant Party in October, which received 42 seats. Poland had thus regained the government constellation that ruled the country in the mid-1990s. The new minister was dominated by communists, of which Miller himself was one. But US-trained finance minister Marek Belka suggested tough financial tightening, while announcing tax increases. The government wanted to give the negotiations on EU membership the highest priority, which the Farmer Party was expected to protest. The election had given many dissatisfaction voices among rural residents, who saw EU adaptation as the cause of growing poverty. At the end of the year, the EU enemy Leppers called the Foreign Minister “villain” when he agreed to the EU’s requirement to facilitate foreigners to acquire property in Poland.

In March 2006, the former communist leader, General Wojciech Jaruzelski, was known to have introduced a state of emergency in 1981.

In May, the nationalist, ultra-Catholic and anti-European party, the League of Polish Families, together with the Samoobrona party joined the government, thus gaining a parliamentary majority.

The October election was won by Donald Tusk’s Citizen Platform and Tusk himself assumed the post of Prime Minister. Two years of confrontational seeking policy with the EU and Germany on the part of the Kaczynski twin couple were over. Tusk approached Poland to both Germany and Russia, and was initially very skeptical of the US missile shield, which involved the launch of rockets in Poland. But in July 2008, he hesitantly accepted a reduced North American project. In August, the country withdrew its soldiers from Iraq.

In April 2009, former leader Roman Giertych of the Parliamentary Investigation Commission investigating Poland’s participation in the United States torture program said that in 2006 the Commission had already submitted its report on the criminal activities to the government. The report has since been kept secret and no steps were taken to stop participation in the torture activities. Several officials and former President Kwasniewski refused to see the report, but confirmed the continued cooperation between the Polish authorities and the CIA.

In May, the European Commission asked Poland before the European Court of Justice not to incorporate EU gender discrimination legislation into its own legislation. Furthermore, Poland has been convicted several times by the Human Rights Court for denying women access to abortion, even when their lives are at risk. Several women have died in recent years because authorities have either refused to conduct investigations or have refused to perform abortions even though the pregnancy was life-threatening.

The Human Rights Court handed down several judgments in 2009 on the Polish judiciary. Among other things. the country practices imprisonment for up to 2 years without trial (prison without sentence) and holds prisoners in cells down to 2-3 m2.

Both in 2009 and 2010, Tusk aired the ideas of a constitutional reform. The relationship with President Kaczyński was, to say the least, strained, so the ideas centered on limiting the president’s power. The president, for example, should. could not veto the government bill, or at least Parliament should have an opportunity to veto.

A Polish plane crashed outside Smolensk in Russia in April 2010. The plane was on its way to Smolensk to mark the 70th year of the Katyn massacre – 22,000 Polish nationalists executed by Stalin’s NKVD in 1940. All 96 aboard the plane, including the country’s president Lech Kaczyński and a number of other senior politicians were killed. In Poland, grief was declared and the president was buried the following week at a state funeral. The tragedy got an extra tragic dimension because the plane crashed in Russia, and it was the Russians who had been behind the Katyn massacre 70 years earlier. Both President Medvedev and Prime Minister were then quick to send their condolences and the following day the country was declared in mourning.

Bronisław Komorowski of the ruling Civil Platform won the presidential election in June / July 2010. He got 41.5% in the first round, while Jarosław Kaczyński of Law and Order got the party 36.5%. Kaczyński had been looking for greater sympathy after the brothers’ tragic death in April, but it failed. In the second round he was defeated when Komorowski got 53% and he himself 47%.

Poland was immediately the country in the EU that managed the first part of the global economic crisis. As the only country in the EU, its GDP did not fall in 2009, but rose by 1.8%. However, unemployment rose through 2009 – from 7.9% in March to 9.1% in March 2010. Youth unemployment was up 23.6%. However, contributing to the rising unemployment was also many migrant workers returning from other European countries that were in deeper crisis – especially Ireland.

In May 2010, Polish police shot and killed a Nigerian trader in a Warsaw market. Police were in the process of arresting all Africans in the market when a brawl broke out. The Nigerian was killed by police during the fight. In December, Nigerian-born John Abraham Godson became the first African to join the Sejm.

The Tusk government had in 2007 imagined Poland to introduce the Euro as currency in 2012. The economic crisis in 2009 caused it to move this date until 2015. In 2011, however, the euro was in deep crisis and the country’s finance minister declared that he could not imagine say that the country should introduce the Euro currency at all. The country presided over the EU in the second half of 2011 and it was during this period that Croatia’s accession was approved.

The government coalition declined slightly in the October 2011 parliamentary elections. Tusk’s Citizen Platform dropped 2.3% to 39.2% and the PSL gained 0.6% to 8.4%. Kaczyński’s Law and Order Party declined 2.2% to 29.9% and Social Democracy also declined by 4.9% to 8.2%. In fact, the only party to advance was the Palikot Movement, which for the first time joined the Sejm by 10%. Janusz Palikot was a member of Tusk’s Citizen Platform when, in July 2010, he stated that Kaczyński was partly to blame for his death in April. The statement led to a fierce controversy that ended with Palikot being thrown out of the party. He instead formed his own populist movement, coming to Parliament on a mix of church-critical and right-wing positions. After the election, the party changed its name to Your Movement. The turnout reached 48.9%. 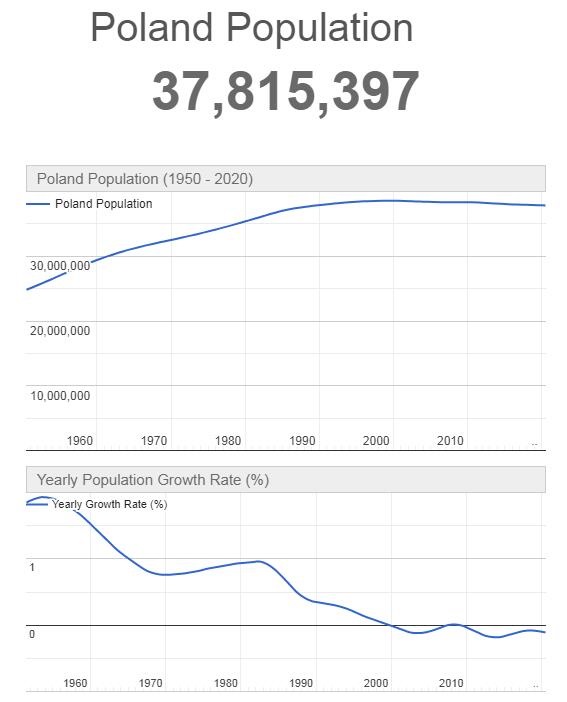