Suriname. At a conference of Indian chiefs in October, the militant Indian movement Tucajana Amazonica presented an ultimatum to the Government of Surinam regarding several decades-old promises of formal tenure for large tracts of land where Indians traditionally lived. The Indians demanded that the promises be fulfilled, otherwise they will occupy the area, which corresponds to 20% of Suriname’s area. They have long protested that their rights are being violated or violated, while the government is giving concessions to timber companies to cut down forest in the area. Many fear a repeat of the 1986-91 Indian War, which raged in the same part of the country. 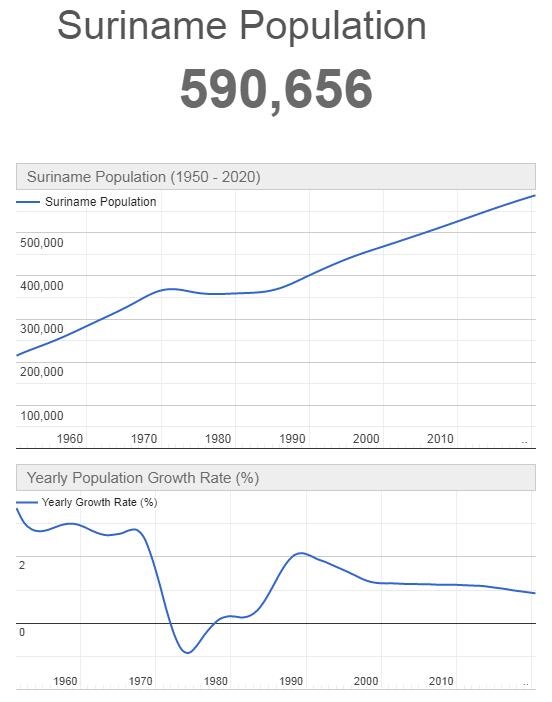 State of South America, bordering on the E with French Guiana, to the South with Brazil, to the West with the Republic of Guyana; to the North it is bathed by the Atlantic Ocean.

Morphologically, three zones can be identified (from N to S): the coastal strip, flat and marshy, formed by fluvial sediments; a strip of slight undulations, varying in width from 30 to 40 km; an area of ​​higher elevations, inside, culminating in the Wilhelmina groups (which reach 1230 m). There are numerous waterways, with abundant flow all year round, navigable in the plains. The main ones are Suriname, which forms Lake Brokopondo, Corantijn (Courantyne) and Marowjine (Maroni), which mark the border respectively to the West and E, Nickerie, Coppename. The climate is equatorial, hot-humid, with high temperatures all year round (but mitigated by the trade winds along the coast) and the absence of a real dry season (average temperature around 27 ° C); rainfall is abundant (about 2700 mm, on average,

From the anthropic point of view, the Suriname appears as a complex mosaic. The largest ethnic group is that of the Asians (37% Indians, 15% Indonesians and 2% Chinese), who began to flow into the country after the abolition of slavery (1863) to work on the plantations, followed by the Creoles. (31%) and the Blacks (10%), descendants of the Africans brought to the South. by the Dutch and reduced to slavery. The ethnic background also counts small minorities of Amerindians (2.5%, descendants of indigenous populations) and Europeans (1%).

The average annual growth rate of the population is 1.1%, which is very low for a Third World country. Suriname is the least densely populated country in South America, due in part to the strong migratory flow to the Netherlands (more consistent immediately after independence but still present). The population is concentrated in the coastal strip and, for over 55%, in the capital. Considerable progress has been made since the 1960s with regard to some basic social indicators: the infant mortality rate, for example, fell from 70 ‰ in 1960 to 18.8 ‰ in 2009, while life expectancy at birth she rose to 73. The total adult literacy rate is very high (over 90%). Important urban centers, after the capital, are Lelydrop and Nieuw Nickerie, located in an important agricultural district; other settlements are Wageningen, Albina and Moengo (mining center).

The official language is Dutch, but English is widely used as a business and intergroup communication language. A Creole idiom, sranan tongo, is used as a lingua franca; furthermore, each ethnic group retains its own local language or dialect. The spread of religions practiced is also affected by the ethnic kaleidoscope: there are Catholics (22.3%), Protestants (18.4%), Hindus (19.9%), Muslims (13.5%).