Bolivia. On July 7, it was announced that 74-year-old President Hugo Bánzer was suffering from lung and liver cancer, and a month later he resigned to complete his medical treatment in the United States. He was replaced by Vice President Jorge Quiroga. Bánzer is praised for the campaign against illegal coca cultivation (Plan Dignidad) he started in 1998 and which led to a drastic reduction in coca production, although it proved less successful than the government initially thought. For example, the 600 hectares of illegal coca cultivation that was said to remain in the Chaparre province were shown, for example. Instead, it should be 6,000. Significantly, the government’s successful fight against this part of the informal sector has also led to a slowdown in the growth rate of the economy.

Bánzer, who was Bolivia’s dictator in 1971–78, is the only one of the 1970s Latin American military dictators who was re-elected to the presidential office in a democratic way. However, he was forced to stand six times before winning the election in 1997 with only 22% of the vote. Ironically, in January, Chilean army sources confirmed that Bánzer was part of the so-called Operation Condor, which in the 1970s coordinated the activities of several South American military regimes aimed at left-wing sympathizers.

The defeat of the Chaco War led many frustrated Bolivian officers to demand reformin Bolivia, and in 1936 a group of younger officers took power in a coup and proclaimed a “socialist” republic in the country. After the original coup makers moved to the right, a new coup the year after the head of the General Staff, Germán Busch, took power. During his reign, work began on the country’s first labor laws and the miners were encouraged to organize. The government also required the mining companies to make all foreign payments through the country’s central bank in order for the government to gain control of the currency trade. After Busch’s death in 1939, conservative officers regained power. Meanwhile, several new political parties had emerged. In the past, the dominant parties were the Conservative and the Liberal Party. Both parties of traditional Latin American bourgeois type (see Colombia). The new parties included: the Marxist Revolutionary Left Party (PIR), the Trotskyist Revolutionary Workers Party (POR), the Fascist Falange (FSB – formed by Spanish pattern) and the Revolutionary Nationalist Party (MNR). At Christmas time 1942, the Conservative government carried out a brutal massacre in the mining town of Catavi. The miners had gone on strike for demands for better working conditions, better wages and the right to organize as they had under the previous government. The strike was struck down with military force, and hundreds more – including women and children – were killed. The Catavima massacre, by the way, is only the most well-known among a number of similar assaults against the miners, which are the most class-conscious part of the working class in Bolivia.

Younger officers and the MNR conducted a new coup in 1943 that brought a new left government under the leadership of Officer Gualberto Villaroel to power. His government continued Busch’s work on organizing the miners, and their union was now more firmly organized under the leadership of one of MNR’s leaders, Juan Lechin. Villaroel also took the initiative of Bolivia’s first Native American congress, where for the first time the country’s oppressed majority was allowed to speak officially. Villaroel’s government met strong opposition from domestic and foreign mining interests, from the large landowners, but also from the communist-oriented PIR. A rebellion in the capital, La Paz, in 1946 met little military resistance, and Villaroel was hanged in a lamppost outside the presidential palace.

After new Conservative governments, the MNR became the largest party in the 1950 presidential election, despite the fact that both the party’s presidential candidate, Victor Paz Estensorro, and vice presidential candidate, Hernán Siles, had to reside in exile. The sitting president refused to approve the election, handing over power to a military junta. This led the MNR, with the support of the police and workers – above all the miners – to crash the junta after armed fighting in 1952. This armed coup followed a series of previously unsuccessful coup attempts organized by the MRC and marked the start of the Bolivian revolution. The army was disbanded and replaced by the MNR’s militia. A land reformgave the land of altiplano back to the Native American population. The country’s LO, COB, and MNR formed a joint government. The three major mining companies – Patino, Aramayo and Hochschild were nationalized and organized into a state mining company (COMIBOL). By contrast, smaller mining companies, such as the North American WR Grace & Co. not affected.

But the MNR’s revolution stagnated. The armed forces resurfaced after pressure from the United States, and the party experienced constant divisions. Among other things. Juan Lechin broke out and formed his own left-wing Revolutionary Nationalist Party (PRIN). In November 1964, Paz Estensorro, who had moved far to the right from the original political platform of the MNR, was overthrown by a military coup, and Generals René Barrientos and Alfredo Ovando Candia took power. On October 8, 1967, Ernesto “Che” Guevara was killed at the head of a guerrilla group trying to organize the Bolivians into armed struggle against their regime. 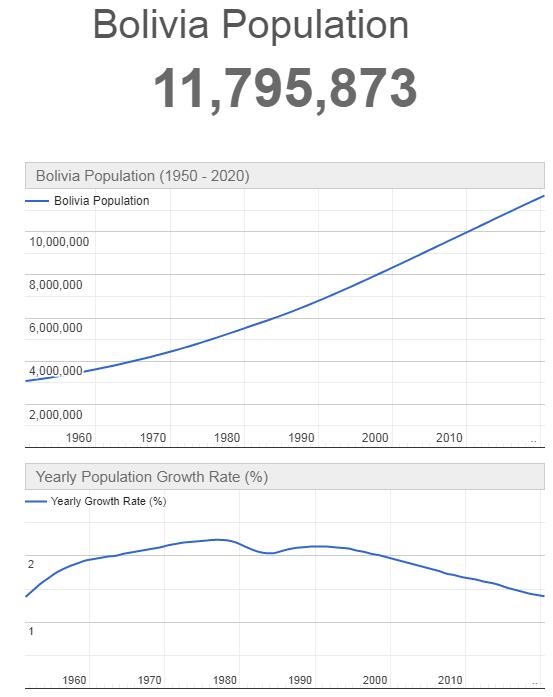