Paraguay. The gap between President Luis González Macchi and Vice President Júlio César Franco from the opposition party PLRA (Partido Liberal Radical Auténtico) has widened during the year and developed into a veritable domestic political struggle. Several members of government resigned from their posts, and the president’s attempt to reform the government and create a new coalition was sabotaged by the PLRA. In May, the PLRA, which is believed to be seeking to put Franco in the presidential post, also requested that a judicial process against the president begin. However, public opinion has shown no interest in the struggle of top politicians; in the mayor’s election held in November, up to 60% of voters from voting. In September, one week after a PLRA demonstration in the capital Asuncion for the president’s departure, also demanded that industry leaders and trade unions in a common public manifestation instead devote themselves to the government to take action against smuggling, tax fraud and corruption. The price increases for gasoline, water and electricity in January also led to widespread protests, not least from farmers, throughout the year.

In the aftermath of the terrorist attack in New York on September 11, attention was directed to the Arab immigrant colony in Ciudad del Este, where, according to the US police, the al-Qaeda terrorist network had an operation center. In November, however, Paraguay’s foreign minister could deny the information. 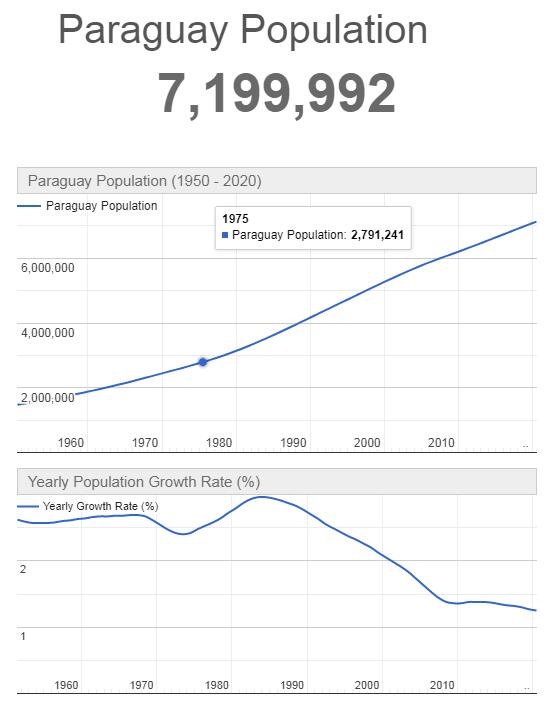 The indigenous population. – In the period of evangelization and colonization pursued by the Jesuits in Paraguay (v. Paraguay, missions) the Guaraní or Guaranized tribes excelled in docility and intelligence, and the Guaraní language took the place of “general language” of European penetration; furthermore, it was the Guaraní women who provided the Spaniards with their half-blooded offspring, which forms the basis of the current mestizo population of Paraguay. But from this it should not be deduced that the ethnographic aspect of Paraguay was of such a simple nature, because instead the indigenous tribes were very numerous, and especially because of their nomadism, they offered an ever changing and difficult to classify field, both linguistic and ethnic.. For everything related to western Paraguay, see. chaco. As for eastern Paraguay, it was, and is, largely inhabited by a large, intensely Guaranized tribe, the Cainguás. They are rather sedentary, and build two kinds of dwellings, one temporary and the other stable, similar to that of the Guaraní; the tembetá o labial ornament takes the form of a long cylinder hanging from the lower lip; they widely practice the cultivation of vegetables, corn, cassava and cotton; they build guitars and violins of European shape and have singing and dancing in honor. Another indigenous lineage, that of the timid and truly sylvan Guayaqui, lives in the southern forest, in small dispersed groups, fleeing the bitter persecution that the Cainguás and armed-hand settlers make of them: they are light-skinned, Mongoloid eyes, strongly saddled nose at the root and pygmoid stature. While their heritage is perhaps the smallest in America, it nevertheless offers some strange mixes. They have, for example, next to the lithic ax gripped in a large branch of a tree, with a completely primitive appearance, a powerful bow of arrows, about two meters high, and possess earthenware pots. They speak a language that turns out to be a Guaraní dialect.