Eritrea. The loss the year before in the war against Ethiopia widened cracks in the state leadership that were previously kept hidden. A recently dismissed minister, Mahmud Sherifo, in April accused President Issaias Afwerki of delaying the legislation that would allow the formation of new parties ahead of the December free elections. In May, 15 ministers and military leaders wrote a letter to members of the ruling People’s Front on Democracy and Justice (PFDJ), in which they criticized the president for violating the country’s constitution by not cooperating with the bodies set up to create a balance of power. Since the letter was circulated via the Internet, eleven of the 15 signatories were arrested. At the same time, all independent newspapers were closed and at least eight leading journalists were arrested.

The Italian ambassador was expelled after handing over an EU protest against the arrests. This led to Eritrea’s envoy in Rome being forced to leave Italy, after which all EU ambassadors in Eritrea were temporarily called. Eritrea’s ambassador to the EU left his service and fled to the United States. 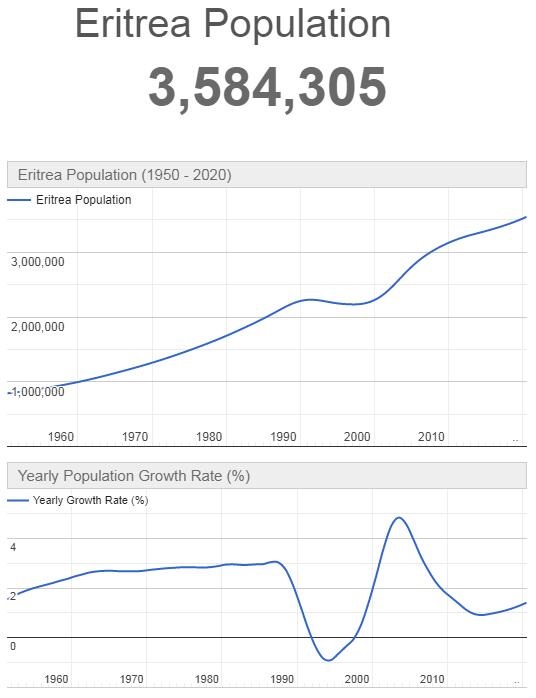 History. – The federation with Ethiopia decided in 1952 by the United Nations lasted a decade, undermined from the outset also by the juridical circumstance that the Ethiopian monarchy, constituting the other component of the federation, had been conferred sovereignty over the federation itself, and therefore on Eritrea. Soon the Ethiopian state, which in fact did not tolerate the existence of this political arrangement, gradually put in place every precaution so that it would end.

In 1955 the opposition parties were banned, and their leaders forced to go into exile; the representative of the Ethiopian crown gathered in his hands, in addition to this only formal office, also that of head of the Eritrean government, thus continuing in the direction, held since the beginning by these representatives, not to take into consideration and respect the Eritrean federal entity. In 1956 the Assembly was elected under the control of said representative and its members could thus be largely oriented in favor of the total political union of Eritrea with Ethiopia. The aim was also the continuous activity, supported by the Ethiopian government, of the political party of the ” unionists ”, the only one left alive by the Eritrean government thus manipulated. Me too’ General Union of Workers’ Unions was dissolved, and in 1958 the Assembly voted to replace the Eritrean flag with the Ethiopian one, one of the acts that had to immediately precede the official annexation, which was a prelude to the behavior of the organs of the Eritrean government itself, now operating under the Ethiopian directives. Civil rights and liberties were reduced and trampled, censorship operated on the press, reducing publications in the Tigrinya language practically to nothing, the Amharic language was in fact replaced by Tigrinya and Arabic in official use, the Ethiopian penal code took the place of Eritrean criminal laws. The last formal act of this process of forced transformation can be found in the change, in 1960, of the term ” Eritrean Government ” to that of ‘ ‘Eritrean administration’ ‘and’ ‘Head of government’ ‘in that of’ ‘Administrator in chief’ ‘. In 1962 the Assembly, won by all means to the Ethiopian cause, voted the end of the federation and the annexation of Eritrea to the Ethiopian state (November 14), sanctioned the following day by an order of the Ethiopian sovereign. The competent international bodies did not object to the annexation. The United States did not make it, which, considering the political interests developed with the Ethiopian state, with the consequent acquisition of strategic bases in Eritrea (mutual defense agreement of 1953), could comply with the decision, perhaps even foreseen, held account of the longstanding insistence with which Ethiopia had supported the ” restitution ” of Eritrea, a former Italian colony, requested by the negùs H̱āyla Sellāsē in his meeting with the president of the United States, FD Roosevelt, in 1945. The decisive opposition to the annexation came from the Eritrean political class, which had gone forming in previous years. The beginning of this opposition can be traced back, as a symbolic date, to 1955, the year of the exile of the Eritrean politicians, who provided, abroad, to lay the foundations of the active and armed struggle for the Ethiopian state, with the aim of obtaining the independence of Eritrea. The Eritrean Liberation Front (FLE), founded in 1958 in Cairo and passed to the armed struggle in 1961, underwent complex events of repeated internal conflicts and splits, also due to its composition with Muslim (first of all) and Christian elements, and the origin of them from various regions of Eritrea (plateau and lowland). His political inspiration evolved variously, from initial patriotic intentions to more complex forms of Marxist socialism. After having actively participated in the armed struggle, around 1981-82 he was reduced to the condition of not being able to continue his military commitment on the field following the emergence of a new movement, formed in 1970 with elements that broke away from the FLE, and came into fight with the latter, even bloody. The new movement, People’s Liberation Forces of Eritrea (FPLE) and then, since 1977, the Popular Front for the Liberation of Eritrea, also with a progressive, socialist-Marxist orientation,