Cambodia. The settlement with the Red Khmer and their time in power (1975-79) still permeated much of the events in the country. The work of creating a special tribunal to bring the top leaders of the guerrilla movement to justice for genocide and other crimes against humanity continued but was greatly delayed. In July, however, Parliament’s lower and upper house accepted the law that will form the basis of the court. The law was signed a month later by King Norodom Sihanouk and thus came into force. The delay was partly due to a dispute between Cambodia and the UN about what the court would look like. While the UN wanted to see an international tribunal based outside the country, the government wanted the process to become a Cambodian matter. Finally, the tribunal’s design became a compromise. Cambodian judges will be in the majority, but foreign UN representatives will have a major influence on the decisions. The law, which stipulated that only “the most responsible” should be investigated, had not yet been approved by the UN, which feared that too many guilty persons would be released. It was unclear when the trial could begin. No man had yet been convicted of the crimes committed by the Red Khmer, which resulted in the death of 1.7 million people. Another step in the healing process after the Red Khmer was taken when 5,000 weapons in the city of Pailin in the former Red Khmer controlled area were burned at a ceremony in October. Since the Civil War, there were about 500,000 light weapons in circulation. The World Bank granted a $ 18 million loan to disarm 30,000 soldiers and return them to civilian life.

In June, five men, including two Americans, were sentenced to life imprisonment for the armed attack in November 2000 against the Department of Defense and military outposts in Phnom Penh. Eight people were killed in the attacks. The men were among the banned anti-communist guerrillas of the Cambodian freedom fighters. 25 others were sentenced to prison terms of between 3 and 20 years.

In November, two slums in Phnom Penh caught fire, and more than 12,000 people became homeless. Most of the residents in the area were ethnic Vietnamese, an unpopular minority because of Vietnam’s previous occupation of Cambodia. The fires broke out in connection with Vietnamese President Trân’u’c Lu’o’ng’s visit to Cambodia.

The provinces on the Vietnam border were hit by severe flooding. At least 56 people were killed.

Cambodia’s contemporary history is the country’s history from the 1990s until today. Cambodia was ruled by Red Khmer from 1975 to 1979 under the leadership of Pol Pot. On January 6, 1979, Vietnam conquered Cambodia’s capital Phnom Penh and proclaimed the People’s Republic of Kampuchea with a provincial government. For the next ten years, the Khmer Red War waged guerrilla war against the Vietnamese in the border areas of Thailand.

Vietnamese forces withdrew from Cambodia in 1989. In 1991, the UN peace plan was signed by all warring parties, and in 1993 it was reunited as a monarchy and the first parliamentary election after many years of civil war. The Red Khmer dropped weapons in 1999.

In 1993, Cambodia was given a new constitution that introduced a democratic system of government. Cambodia again changed its name from the People’s Republic to the Kingdom, and Prince Sihanouk, who had abdicated in 1955, was re-elected as King.

Cambodia has, over time, often been in a state of dependence on other powers and repeatedly fell victim to regional and global superpowers. Relations with the stronger neighboring countries Vietnam and Thailand have been periodically tense, partly as a result of border disputes. China has long supported the Red Khmer, but changed its position in the early 1990s.

After ten years of continuous fighting, Vietnam withdrew its forces from Cambodia in 1989. The UN peace plan, signed by four warring parties in October 1991, brought Cambodia out of isolation. In February 1992, the Security Council decided on a Cambodian operation, which until then was the largest and most costly in UN history. The UN Transitional Authority in Cambodia (UNTAC) included 15 900 soldiers, 3,600 police officers and 2,400 civilian administrators from 60 countries, including approximately 60 Norwegians. The mandate was the monitoring of the ceasefire, the demobilization of armed forces, the management of important ministries and the organization of democratic elections in 1993; the first multi-party election in the country since 1966.

About 350,000 refugees returned home from camps in Thailand. Problems arose when the UN was to partially disarm the four army forces. The Red Khmer refused to give up weapons, declared themselves opponents of the elections and intensified the guerrillas, and dozens of UN soldiers were also killed. However, the elections were held as planned in May 1993, with a turnout of 90 percent. The royalist Funsinpec party under Prince Ranariddh, son of Norodom Sihanouk, won the election by 46 percent. Cambodia’s People’s Party (CPP), an offshoot of the provincial Communist Party, got 38 percent.

After hard fighting, the two parties formed a coalition government with two prime ministers. Prince Ranariddh was formally ranked number one and Hun Sen from CPP number two. She Sen had deserted from the Red Khmer in 1977 and in the 1980s was Cambodia’s strong man. The cooperation was characterized by strong sparks, with occasional fighting between the armed forces of the coalition partners.

In 1993, Cambodia was given a new constitution which introduced a democratic system of government. Until then, the Cambodians had only had various forms of dictatorship: colonial rule, royal monarchy, right-wing dictatorship, Red Khmer terrorist rule and a one-party socialist state. Cambodia again changed its name from the People’s Republic to the Kingdom, and Prince Sihanouk, who had abdicated in 1955, was re-elected as King. After the 1993 elections, new political parties emerged, but democracy was deficient and characterized by the reign of governors. 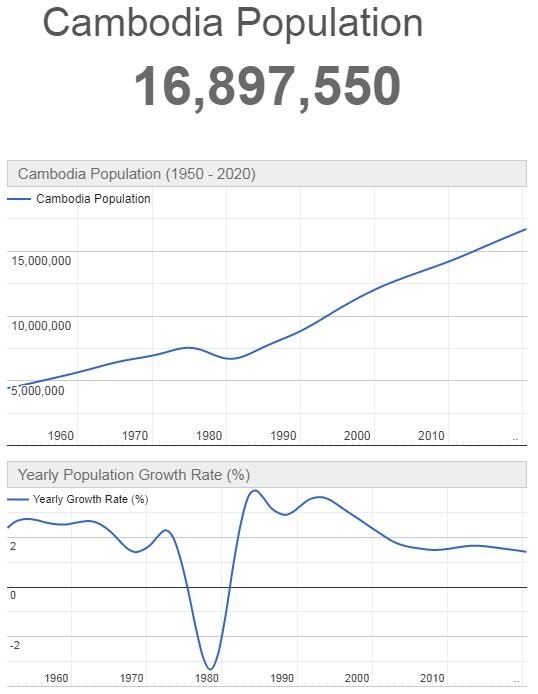