Claims in May between Muslims and Sinhalese got the government rocking. A Muslim party threatened to leave the ruling People’s Alliance, the People’s Alliance (PA), unless violence against Muslims was stopped. When President Chandrika Kumaratunga dismissed the Muslim Minister of Commerce in June, who was alleged to have had contacts with the opposition, the Muslims put the threat into action and the government ended up in a minority. In order not to subject the government to a declaration of mistrust, the president temporarily closed the parliament. Sinhalese-Nationalist People’s Liberation Front, Janata Vimukthi Peramuna (JVP), offered the government its support against the president withdrew a proposal for a referendum on a new constitution. It was a serious loss of prestige for Kumaratunga to be forced to seek help from the JVP, which has twice been involved in bloody conflicts with state power.

In July, LTTE attacked the country’s international airport. At least 18 people were killed and eleven aircraft destroyed. The damage was valued at the equivalent of just over SEK 3.5 billion and was a severe blow to the Sri Lankan economy, which has already shown bleak figures on slowed growth.

After a series of resignations from the government, including several ministers, Kumaratunga was forced to dissolve parliament and announce new elections. The election turned violent. About 60 people were killed until Election Day in December. The election also received harsh criticism for cheating and threats against voters, but the result was so clear that reelection was not considered necessary. Opposition Party The United National Party, the United National Party (UNP), in cooperation with the Muslim Party gained its own majority and was also expected to be supported by moderate Tamil parties. New Prime Minister Ranil Wickremesinghe was faced with the difficult task of working with Chandrika Kumaratunga, who holds the presidential post. 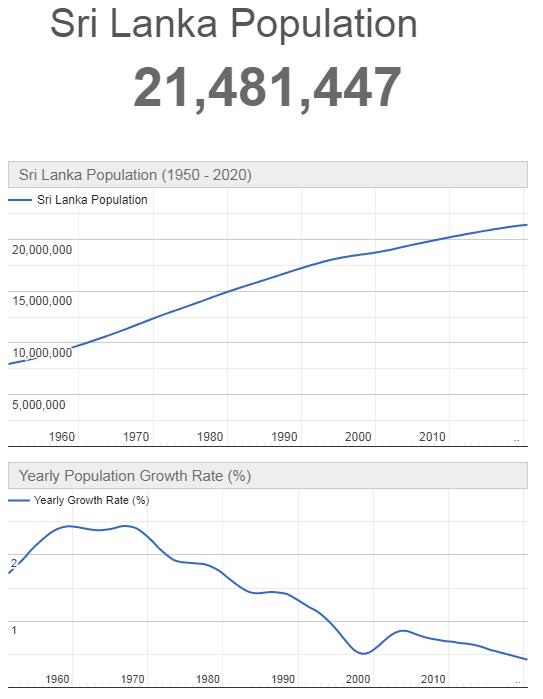 The population is made up of over 80% Sinhalese, of Indo-European stock, who arrived on the island in the 5th century. BC and converted to Buddhism in the 3rd century. B.C; the largest minority group is the Tamil, 9% (divided into Tamils ​​of the Sri Lanka, descendants of the oldest southern Indian groups who settled on the island, and Tamils ​​of India, who immigrated in the 19th century to work in the plantations), of Dravidian stock, Tamil-speaking, and generally Hindus. Tamils, mainly settled in the northern and north-eastern regions, have significantly decreased (they represented 17% of the population in the early 1990s) due to the worsening of the ethnic conflict which produced large masses of refugees headed mainly to India. A little smaller than the Tamils ​​are the Moors (8% of the population), Muslims, mostly descendants of black slaves and a small part of ancient Arab navigators.

The rate of demographic increase, very high up to the early 1980s, has progressively decreased over the last two decades until reaching (2009 estimate) an annual growth of less than 1%. The most populous city is Colombo (652,000 residents in 2005), the capital until 1982. Other important cities, in addition to the capital, are Dehiwala-Mount Lavinia, Moratuwa, Negombo (all close to the capital and Colombo) and Jaffna, on the extreme north coast.

In addition to the two official languages, English is widely spoken, and widely used in education and bureaucracy. The distribution of religions roughly follows that of ethnic groups: Buddhists 76.7%, Muslims 8.5%, Hindus 7.9% and Christians (mainly Sinhalese) 6.1%.