South Korea. The approach to North Korea encountered obstacles. During President Kim Dae Jung’s visit to the United States in March, US President George W. Bush made it clear that the US attitude to North Korea under his leadership would be tougher than during the Clinton administration. To mark the so-called sunshine policy towards North Korea, Kim appointed a well-known advocate for this policy to reunification minister Lim Dong Won. Nevertheless, North Korea broke down all contact with South Korea at ministerial level as a result of the US position. To show its support for the reunification process, in May the EU sent a delegation, led by then EU President Prime Minister Göran Persson, to Pyongyang and Seoul.

In early September, North Korea proposed to resume talks, which South Korea accepted. At the same time, however, the Seoul Parliament voted for a declaration of confidence in the reunification minister. Formally, Lim was blamed for a South Korean delegation’s failure to visit Pyongyang, but widespread dissatisfaction with the expensive and unsuccessful dialogue with the North was considered to be the real reason. Kim was forced to dismiss Lim and as a result the entire government resigned on September 4. Kim did a government transformation with unexpectedly small changes. China’s ambassador and former Foreign Minister Hong Soon Yung became the new reunification minister. Lim was given an important advisory role near Kim.

In mid-November, dialogue with North Korea broke down again and recently entered into agreements on, among other things, more family reunions were jeopardized. The countries could not agree on the view of the global fight against terrorism. As a close ally of the United States, South Korea remained in high alert following the September 11 attacks against the United States, which North Korea considered targeted them.

In November, President Kim Dae Jung resigned as leader of the ruling party MDP in an attempt to stave off an internal political crisis following the party’s defeat in several filling elections in October.

South Korea’s economy was affected by the international downturn. In November, forecasts suggested that GDP growth for 2001 would halt at 2-3%. However, through various package of measures, the government managed to avoid economic recession, even though important exports fell. In August, however, the last repayment could be paid off on the $ 19.5 billion IMF loan that South Korea was forced to take during the 1998-99 Asian crisis. At the end of the year, South Korea lifted the heightened military readiness, which was supposed to be able to facilitate attempts to breathe life into the reconciliation process with North Korea. 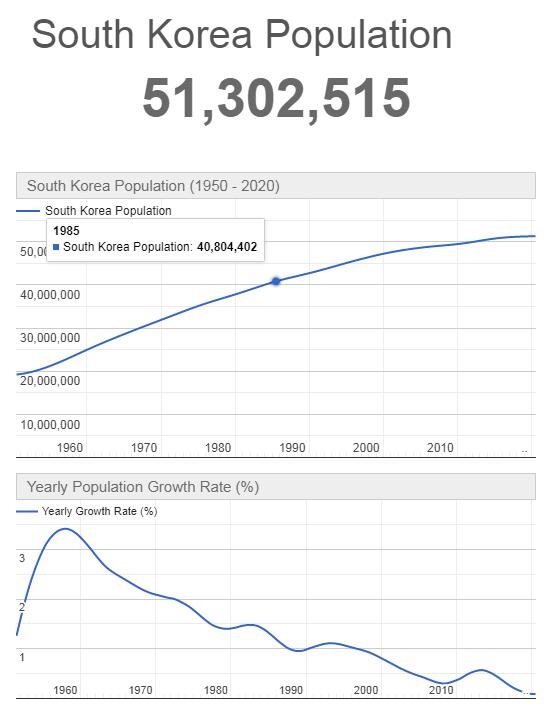 The Republic of Korea is one of the most densely populated countries in the world. If the demographic trend was fluctuating until the mid-twentieth century, as a result of wars and famines, the population doubled in the second half of the century, with average annual increases of around 3%, between the end of the 1950s and the early 1960s, in concomitance with the economic and organizational modernization processes affecting the country. The growth rate then fell considerably (0.7% annual average in the period 1999-2004, up to 0.4 in 2008), also following family planning interventions promoted by the State, while the other demographic indicators improved, with a sharp decline in infant mortality, a significant increase in life expectancy (from less than 60 years in 1970 to almost 80 in 2008), almost complete literacy of the population and exceptional levels of higher and university education. The population density is higher in the north-western and southern regions, where vast flat areas extend and where traditionally both rural and urban settlement is more consolidated; in the plains, moreover, open to maritime influence, the climatic conditions are decidedly less continental than in the rest of the country and much more favorable to agriculture, so as to allow in some cases two harvests a year. In the eastern section, however, and along the coast washed by the Sea of ​​Japan, where the Taebaek mountain range rises, the settlements are scarce and the population relatively sparse. Intense internal migrations were triggered by the military conflict of the 1950s; in the following decades the phenomenon regained vigor due to the abandonment of the countryside, the resources of which by now turned out to be insufficient for a rapidly growing population, while the cities were industrializing and attracting more and more people; to this was added, starting from 1953, the arrival of refugees from North Korea.

The capital Seoul, which in the mid-twentieth century barely reached 100,000 residents, has largely exceeded 10 million, and its urban agglomeration (including several other large cities, including the important port center of Inchŏn), with over 23 million residents in 2007 it is the second in the world and is home to just under half of the country’s population. Among the causes of this very rapid growth of Seoul are the function of railway and road communications node, the industrialization processes and the subsequent outsourcing; from an urban planning point of view, the city had to adopt intensive solutions that favored the vertical development of buildings, high-speed roads, large-capacity underground lines; the holding (1988) of the Olympic Games produced a further strengthening of urban infrastructures. The second largest city in the country is Pusan ​​at the other end of the territory(3.6 million residents In the agglomeration), one of the busiest ports in Asia; a little to the North of this rises Taegu, which in turn is close to 2.7 million residents.

The population is ethnically very compact, but the presence of approximately 2% of residents of Japanese origin is noteworthy. About half of the population does not adhere to religious faiths; among these, Buddhism is the most widespread (23%), but Christians have increased in the last century (Protestants are about 20%, Catholics almost 7%), whose presence dates back to the eighteenth century; The Confucian approach, however, affects the whole of the spiritual and cultural expressions of the residents, beyond the cults practiced.