Nepal. On June 1, King Birendra Bar Bikram Shah Deb, Queen Aishwarya and eight other members of the royal family were shot to death in Kathmandu Castle. The perpetrator was appointed 29-year-old Crown Prince Dipendra. According to an official investigation, in his drunken and drug-affected condition, he must have mowed down his relatives with automatic weapons following a family dispute about his choice of wife. Then he must have shot himself, but he only died after lying in a coma for three days. During his time at the hospital, he was appointed king, while his uncle Gyanendra Bir Bikram Shah Deb took over as regent. At Dipendra’s death on June 4, Gyanendra was appointed king.

The massacre gave rise to a number of conspiracy theories, but after a while the population began to accept the official explanation. However, the Maoist guerrilla, which has waged war against the state for six years, claimed that foreign forces were behind the killings and stepped up the fight against the “puppet regime”. The government responded with stricter security laws, such as strongly restricted freedom of strike and demonstration. For the first time, the regular army was deployed in the fight against the Maoists.

In mid-July, Prime Minister Girija Prasad Koirala resigned as a result of the deteriorating security situation. He was succeeded by Sher Bahadur Deuba, who in just one day created a ceasefire. At the end of August, peace negotiations began, which then went on in the autumn. No concrete results were achieved, but both sides began to release prisoners and the guerrillas indicated that it could give up its basic demand that the monarchy be abolished. In return, the government withdrew the new security laws.

In November, however, the guerrilla broke the ceasefire under the pretext that the government had no honest intentions with the negotiations. The state responded with a strong counter-offensive by both the army and the airline and guerrillas were reported to have suffered great losses. An emergency permit was introduced throughout the country. The new outbreak of war cost the state large sums, and more than the equivalent of half a billion SEK was transferred from development projects to military operations.

On the recommendation of Prime Minister Oli, President Bhandari dissolves the Nepalese Parliament and announces new elections until April 30 and May 10, 2021. This means that general elections will be held in Nepal one year early. The reason is serious contradictions between the ruling coalition NCP’s two parties CPN-UML, to which Oli belongs, and the Maoist CPN-M. The controversy is about a power struggle between Oli and the Maoist leader Prachanda, who wants Oli to leave the post of prime minister. People take to the streets in cities like Kathmandu and demand Oli’s departure.

Nepal and China agree – after years of discussions – on how high the world’s highest mountain, Mount Everst, is: 8 848.86 meters. It is 86 centimeters higher than what Nepal has previously determined and over four meters higher than China’s official figure. The difference is due to the fact that China has measured from the highest fixed point while Nepal also counted on the snow and ice on the top of the mountain. Mount Everest is located next to the border between the two countries. 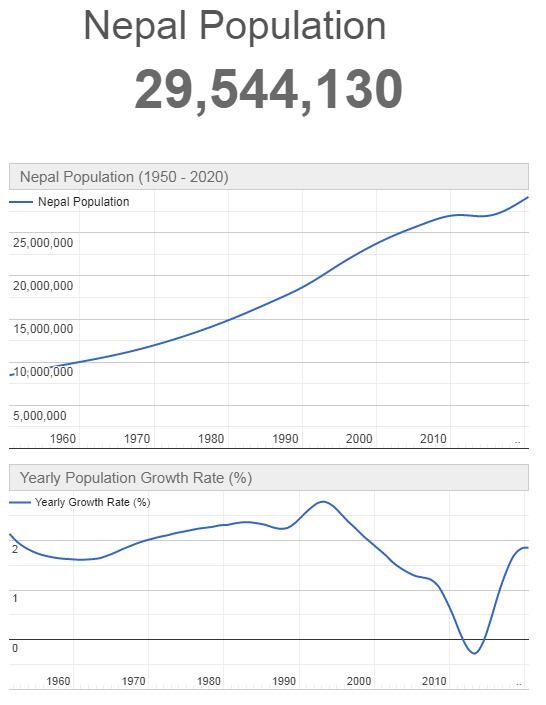