Peru. On June 3, Unexpectedly, Alejandro Toledo won the presidential election, making him the first President of Peru’s history with Native American sting. Instead, the big surprise was the performance of the opposing candidate, the former president (1985-90) Alan García, who, one year before the election, lived in exile called for embezzlement; half a year before the election he was in third place with 13% of voter sympathies, and in the second round of the election he managed to reach 47%. Garcia’s comeback is considered remarkable because in 1990 he left a country in disaster state with an armed guerrilla uprising, hyperinflation and widespread corruption.

The clean-up after former President Alberto Fujimori, who resigned last year, continued during the year. Just three weeks after the election, the former head of the security service Vladimiro Montesinos, widely regarded as Fujimori’s right-hand man, was arrested in Venezuela where he lived in exile and was extradited to Peru. Fujimori himself lives in exile in Japan, and the pressure on the Japanese government to extradite him has increased. In August, Peru’s Supreme Court issued an international arrest warrant for him.

The same day that Montesinos was arrested, southern Peru was shaken by a powerful earthquake; the worst affected the city of Moquegua. However, the number of casualties and injuries was quite small thanks to a successful preventive information campaign.

The opposition to Leguía’s dictatorship led the middle class and parts of the working class to support the Victor Raúl Haya de la Torres APRA party. Parts of the working class supported the Socialist Party, which was founded just a few years before Leguía was overthrown. Both of these mainstreams – on the one hand APRA and on the other the Socialist Party – started out as movements among students and intellectuals. The first leaders came from the environment of writer Manuel Gonzáles Prada, who wanted to reform and re-create Peru after the shock of the Pacific War.

Haya de la Torre founded APRA (Allianza Popular Revolucionaria Americana, America’s Revolutionary People’s Alliance) among Peruvian exile students in Mexico in 1924. In response to APRA – which soon proved to be widely accepted in Peru – José Carlos Mariátegui founded the Socialist Party, which after his death in 1930 was split into a socialist party and a communist party – i.e. on the question of affiliation with the Comintern.

APRA’s goal was to form a continental organization with five main program points: control of North American imperialism, internationalization of the Panama Canal, political and economic rally in Latin America, nationalization of land and industry, and solidarity with all oppressed peoples and classes. APRA cooperated from the start with the unions in the CGTP (Confederación General de Trabajadores del Perú), and in the 1920’s the question of cooperation or affiliation with the Comintern was also relevant. But while the Communist Party was a class party, APRA was based on a class alliance between the working class and the growing middle class. Although the rhetoric remained radical, APRA quickly moved to the right. Cooperation with the Communist Party was discontinued, and in the 1940’s APRA started its own trade union organization, the CTP (Confederación de Trabajadores del Perú).

Until 1945, APRA was most often banned, but appeared in 1945 as the largest political grouping. This year, José Luis Bustamante won the presidential election with the support of APRA. For the next three years, APRA gained some political influence, but it soon became apparent that the party’s radical program was not going to influence political work. Yet, the fear and hatred of APRA was so strong in the oligarchy and among the military that in 1948 they took power in a coup led by Manuel Odría.

APRA was banned and persecuted, but Odría nevertheless – as similarly caudillos as Perón in Argentina and Rojas Pinilla in Colombia – received some popular support. This was due to, among other things, the economic boom in the 1950’s as a result of the Korean War. This provided the basis for a number of social reforms. it was not until this time that the women got full voting rights. In 1956, Odría was replaced by elected President Manuel Prado.

Prado was elected with the support of APRA after the party was legalized again and entered into the so-called “convivencia” – a cooperation agreement with the oligarchy. The APRA’s right turn led many young people to leave the party and founded the party Acción Popular (AP). The APRA’s constant attempts to win the presidential election were based on the military’s resistance and the split in the party. Instead, the head of AP, Fernando Belaunde Terry, won the 1963 election. His reform program had the support of the military, but quickly turned out to be in the sand. The government failed to control the economy, and the country’s currency – the sun – was devalued by 40% in 1967. This, along with the military’s fear that the APRA would win the 1969 election, led the military to take power in a coup in 1968. 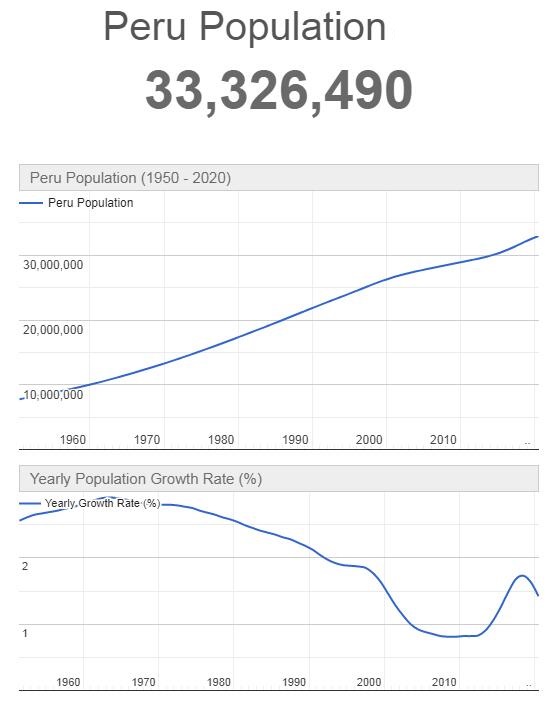