Kuwait. Renowned journalist Hidaya Sultan as-Salim, owner of the weekly newspaper al-Majalis, was murdered on March 20. Four suspected offenders were arrested, among them a police officer who reportedly admitted the murder. He said the motive was that as-Salim and her newspaper would have published material that offended his tribe.

Ali Husayn al-Khafaji, Colonel “Ala”, who led the puppet regime that Iraq imposed in Kuwait in connection with the invasion of the country in 1990, received in March the death penalty he was sentenced to life imprisonment.

Following the terrorist attacks in the United States, Kuwait gave the United States unreserved support and promised to serve whatever assistance the Americans requested. In mid-October, Kuwait robbed one of terrorist suspect Usama bin Laden’s closest men, Sulayman Abu Ghayth, of his Kuwaiti citizenship. Abu Ghaith appeared on a number of occasions on Arabic TV and threatened with continued attacks against the United States and Britain. The Kuwaiti authorities also forced a number of Islamic charities to stop their operations.

The Emir of Kuwait, 73-year-old Jabir al-Ahmad as-Sabah, suffered a mild brain hemorrhage on September 21 and received treatment in London. Throne followers are 71-year-old Sad al-Abd Allah as-Salim as-Sabah, who himself suffers from a number of health problems. 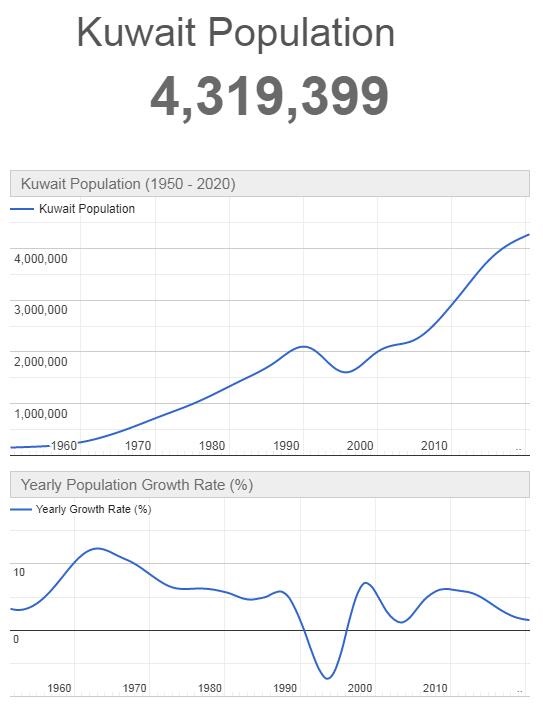 Kuwait’s recent history is first and foremost marked by the physical reconstruction and political developments following the Gulf War in 1990–1991, and then by regime criticism during and after the Arab Spring, 2011–2012.

The occupation of, the war with and the liberation from Iraq in 1990-1991 led to the questioning of the political regime in Kuwait in general, and of the emir’s political role in particular. Demands for political liberalization and a more democratic government increased in the 21st century, and in particular from 2011-2012. This coincided in time with the Arab Spring, and was to some extent influenced by it.

Political protests in Kuwait had also been expressed in the past, where a conflict over power was central. The question was what power the elected national assembly should have, and thus how the executive power of the country’s monarch, the emir, had to be limited. The political contradictions have led to several new elections and reduced political stability.

Already at the independence of 1961, Kuwait had a more democratic system than the other monarchies on the Gulf of Persia. This is still the situation, and developments after the Gulf War have led to more influence by the National Assembly. The emir still has extensive power, including appointing the government. One of the prominent conflicts, therefore, is between the emir as a person and an institution on the one hand and the elected National Assembly on the other. In Parliament there is also a political opposition to the government, which is designated by the emir.

The conflict between the monarch and the National Assembly has its roots in the years following independence in 1961. It was created especially as a result of the emir’s unconstitutional dissolution of parliament, first in 1976 and then in 1986. Democratic demands were reinforced by increased dissatisfaction with the unanimous rule of al-Sabah. -the dynasty and its role during the Gulf War. The royal family then fled to Saudi Arabia, and were accused of not participating actively enough in the fight against the occupation. It also took some time for the family to return after the liberation. After the war, there was also some contradiction between those who had left in Kuwait and those who had fled. At the same time, the war brought a stronger Kuwaiti national feeling.

Kuwait does not have an inheritance monarchy, and a new head of state is appointed among leading members of the two parts of the ruling al-Sabah family. The two parts, al-Salem and al-Jaber, have normally shifted to the throne. In recent years, the al-Jaber branch has gradually gained more power than the other, which was emphasized by the fact that one al-Jaber was in fact followed by another at the change of throne in 2006.