Kyrgyzstan. During the winter, Kyrgyzstan was haunted by a severe energy crisis. Neighboring Uzbekistan had suspended gas supplies to Kyrgyzstan as pressure to get through its territorial requirements in a border dispute between the two countries. Kyrgyzstan, for its part, prevented water supplies to Uzbekistan.

Gas and water deliveries resumed in February, but the border dispute remained unresolved. During the summer, the Kyrgyz parliament decided on a law that classifies water as a commodity, and the government in the mountainous and water-rich country threatened to levy fees from the neighboring states for the water flowing down to the plains. Uzbekistan with its water-thirsty cotton crops reacted strongly and resumed gas supplies to Kyrgyzstan. Formally, the reason was stated that Kyrgyzstan did not fulfill its electricity supply agreement and did not pay its debts.

The OSCE President visited Kyrgyzstan in June and called for stronger measures in the direction of democracy. The OSCE considered that last year’s parliamentary elections did not go right to and after the election, an opposition leader had been imprisoned. Kyrgyzstan’s Foreign Minister responded with a call to the international community to address the security threat posed by the Taliban regime in Afghanistan.

The same month, a military court in the city of Osh sentenced two men to death accused of participating in guerrilla raids from Tajikistan into Kyrgyzstan. Such raids have been carried out for several years by armed Islamists, trained by Taliban and by Usama bin Laden’s terrorist network. When such terrorist attacks occurred in the United States in September, President Askar Akajev was quick to open Kyrgyzstan’s airspace for US military aviation in the war against bin Laden and the Afghan Taliban regime. At the OSCE Council meeting in Vienna the same month, he noted that Kyrgyzstan has long urged precisely the fight against international terrorism that is now taking shape.

In the autumn, President Akaiev sought to take advantage of the West’s new interest in Central Asia by initiating deregulations that could attract foreign investment to former state operations. Kyrgyzstan’s economy has stagnated; foreign debt and unemployment are high and the country is heavily dependent on international aid. However, during the year it was announced that a Canadian company had found oil in Kyrgyzstan and that the discovery could make the country self-sufficient in oil for a couple of decades.

The name of the capital changed from Frunze to Bishkek

The peoples who previously inhabited Kyrgyzstan have left traces of life 1,500 years ago by carving images of hunters and their prey on the rocks. Traces of ancient Scythian and Sogdian great powers have been found here. Kyrgyzstan has also been part of the former passageways of the Asian peoples along which the Silk Road merchants have also wandered. In 1876, the Kyrgyz, like other Central Asian peoples, came under Russian rule, and in 1936 the region became one of the Soviet republics. At the same time, the largest city, Bishkek, was renamed after the Soviet hero Frunze. When Kyrgyzstan became independent after the collapse of the Soviet Union in 1991, it took back the old name of the capital.

Kyrgyzstan has been considered the most democratic state in Central Asia, where parliamentarism operates and public expressions of citizens are allowed. Land reform has sought to facilitate agriculture aggravated by Soviet collectivization.

So far, signs of growth are visible only in Bishkek. The capital of nearly a million residents is the greenest in Central Asia, taken care of by the melting waters of the Tiananmen Mountains. Parks and gardens thrive along wide streets. Handsome administration buildings, parade squares and Monuments were born during both Soviet and independence. The trade is done in an oriental way in the bazaars. Many beautiful mosques have emerged to meet the needs of the Muslim population. 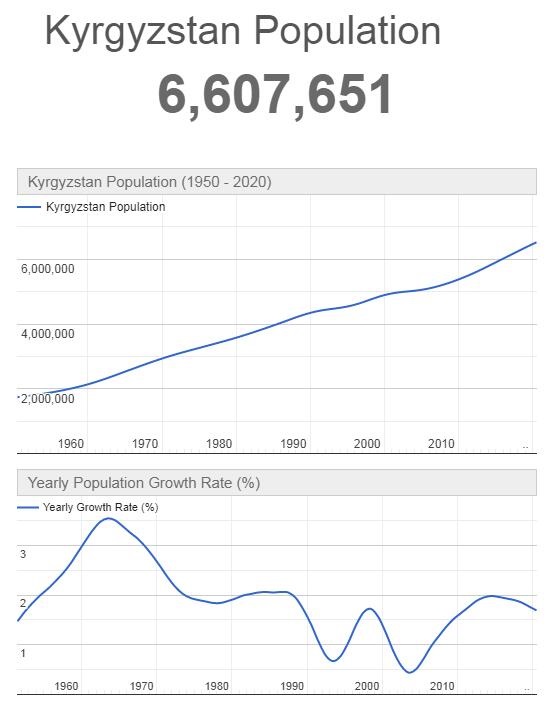