USA. The all-overshadowing event during the year was the September 11 terror attack, when suicide pilots crashed two hijacked passenger planes against the World Trade Center’s two skyscrapers in New York and one against the Washington Defense Pentagon headquarters. A fourth plane crashed on a field in Pennsylvania. The borders were closed, military forces were in high alert and the entire nation was in shock. President George W. Bush called the attack an act of war, and assured that the guilty would be chased by every conceivable means.

The suspicions were immediately directed at Saudi-born Usama bin Laden and his Islamist network al-Qaeda, based in Afghanistan. The United States requested him extradited, but the ruling Taliban refused, and on October 7, the United States launched a bombing war in order to seize bin Laden and drive the Taliban away.

Domestic politics led to the terrorist attack behind Bush. The support for the bombing war and restrictions on otherwise cherished civil rights was massive, as the majority considered the extraordinary circumstances justified drastic measures. New anti-terror laws were adopted such as gave the authorities greater rights to intercept telephone calls and electronic communications, and it was decided that suspected terrorists could be brought before military courts. Many were arrested and interrogated, preferably people of Arab origin. Muslims reported harassment, prompting political leaders to emphasize that the war was not directed against Islam but against Islamist terrorists.

Great concern arose when news organizations and authorities began to receive letters containing traces of deadly anthrax bacteria. Five people died and another 13 were infected, but soon suspicions arose that a lone American scientist was behind the attacks and not foreign terrorists.

On September 14, the two chambers of Congress unanimously allocated $ 40 billion to fight terrorism and reconstruction in New York. Congress also announced that the United States would pay part of its large debt to the UN.

The new security policy situation made international cooperation the highest priority, even though it was primarily to put pressure on the world’s governments to ally themselves, at least in words, with the U. in the fight against terrorism. Bush had otherwise, during his nearly nine months as president, made it clear that he was prioritizing American interests ahead of international settlements. He caused much anger, not least in the EU, when he announced in March that the United States would withdraw from the so-called Kyoto agreement, which aimed to reduce emissions that contribute to the greenhouse effect. In July, the United States also left talks on the Convention on Biological Weapons, and, according to critics, thus sabotaged seven years of negotiations.

Bush’s plans to build a defense system against nuclear weapons, a so-called robotic shield, also encountered resistance. The protests came mainly from Russia and China, but strong concerns were also heard among NATO allies. Despite objections, the White House announced in December that the ABM agreement was scrapped, so that the U. could develop the robot shield. The Nuclear Weapons Agreement of 1972 was a cornerstone of disarmament efforts during the Cold War.

When Bush took office as the nation’s 43rd president on January 20, many feared that the drawn-out battle for the election results in Florida – and thus the electoral victory – would leave its mark in the form of increased party political polarization in Washington. Some of his nominations for government posts were also contested, not least the appointment of John Ashcroft as Minister of Justice. Ashcroft was controversial because of his conservative stance on, among other things, abortion and gun control, but was approved Feb. 1 by the Senate with support from several Democrats.

The political agenda was marked in the first few months by negotiations on the far-reaching tax cuts that Bush had promised during the election campaign. The package finally adopted by Congress in May was downsized from $ 1,600 billion to $ 1,350 billion, but was mainly seen as a victory for the president, who was backed by some Democrats here as well. The reductions, which were to be implemented in ten years, consisted, among other things, of lower income taxes and abolished federal property taxes. In addition, all taxpayers received up to $ 600 in reimbursement during the summer.

Senator James Jeffords of Vermont caused a political scuffle when he announced in May that he intended to leave Republicans and support the Democratic leadership in Congress’s powerful first chamber. The dropout was particularly noted as it led to a shift in power in the Senate. Both parties were equal after the election, with 50 senators each. In such a situation, the vice president gets a casting vote, giving Republicans control of the Senate. After Jefford’s side change, the balance of power shifted to the Democrats’ advantage, and they also had to take over the chair of the influential committees. New majority leader after Trent Lott became Tom Daschle.

In February, FBI agent Robert Hanssen was arrested and charged with espionage first on behalf of the Soviet Union and then on Russia. He eventually pleaded guilty to having sold secret information since 1979 and promised to reveal all the details to avoid the death penalty. In March, 51 Russian diplomats were ordered to leave the country, accused of spying. The order was generally seen as a revenge for the Hanssen case.

In the state of California, electricity supply problems continued. On several occasions, planned power outages were carried out following a rolling schedule, in an attempt to avoid bankruptcy for two large energy companies. The cause of the crisis was considered to be deregulation in 1996, when companies were banned from raising prices for consumers, despite rising prices from suppliers. But the power outages could not save Pacific Gas and Electric, which in April had to file its bankruptcy application. The company had $ 9 billion in debt and the bankruptcy was reported to be the third largest in US history.

Results from the 2000 census were published successively during the first months of the year, showing, among other things, that the number of Hispanics for the first time was about the same as the number of blacks, 35 million and 36 million respectively. Hispanic Americans, mainly of Latin American origin, are said to have increased by 60% since 1990.

The economy continued to show signs of a substantial slowdown at the beginning of the year when stock markets fell sharply. The Federal Reserve Federal Reserve sought to mitigate the effects of the cyclical downturn by repeatedly lowering the key policy rate. When the 11th cut for the year was implemented in December, the interest rate fell to the lowest level in 40 years, 1.75%. But the disaster scenario painted after September 11 proved exaggerated, and towards the end of the year a cautious optimism was noticed. Among other things, consumer confidence in the future and purchase desire seemed to have been strengthened, despite continued high unemployment. Although the stock exchanges fell for the second year in a row, at the end of the year they had recovered not only from the scuba diving after the terrorist act, but also compared with bottom listings during the first half of the year. 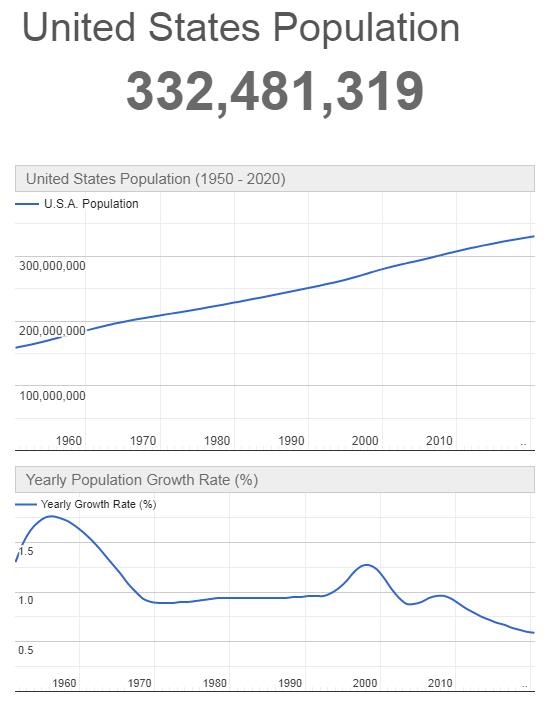