Greece. Prime Minister Kostas Simitis furnished his government on October 24. By exchanging a number of veterans with a large group of young reformers, he created a government of 48 ministers – the largest so far under Socialist Pasok. The government would especially devote itself to the preparations for the Athens Olympics in 2004. Greece had earlier received international criticism earlier this year for not having progressed far enough in the construction of arenas and when it came to security arrangements.

MP Vasilios Mikhaloliakos was injured in a bomb attack on January 21. Mikhaloliakos, who belongs to the conservative party ND, had just returned from a speech demanding tougher terrorism. The police made their suspicions against the terrorist group on November 17.

The presence of 450 peacekeeping Greek NATO soldiers in Macedonia in August led to intensive diplomatic contacts between Greece and Macedonia, which has a lengthy dispute over who has the right to use the name Macedonia.

Following the terrorist attacks against the United States on September 11, Greece vowed to support the US fight against terrorism. But when the US began its war in Afghanistan, the Greeks were by far the most US-critical residents of any NATO country.

Swedish 17-year-old Calle Jonsson was arrested in July on the island of Kos accused of knife-cutting a man. According to his lawyer, the charges were based on testimony that emerged after pressure from the police.

Twelve British and two Dutch citizens were arrested on November 8 at a Greek military airport, where they devoted themselves to watching aircraft, so-called plane mocking. They were charged with espionage and risking 20 years in prison, but were released on bail in mid-December.

National holiday: 25.3. (Beginning of the liberation struggle against the Ottoman Empire in 1821)

State and form of government
Constitution of 1975
Parliamentary republic
Parliament (Voulí ton Ellínon) with 300 members; Party with the largest share of votes will receive bonus of 50 additional seats, elections every 4 years
election of the head of state by Parliament every 5 years (renewable once)
elective from 17 years

Religions,
especially Orthodox; Minorities of Muslims, Protestants and others (status: 2006)

The civil war caused the bitterness of the occupation to be further intensified. Those who had cooperated with the Nazis were now cooperating with the Greek authorities, while large parts of the resistance movement continued the struggle. US and England support for the fascists brought them to victory. When the civil war of 1949 was over, the prisons were filled and new concentration camps were set up on the islands. The same year, the country was admitted to the Council of Europe and in 1952 to NATO. The first post-Civil War election was held in March 1950, giving the central Liberals a clear victory over the Conservatives. General Plastiras was assigned to form a government. He only sat for a short time and was sentenced because he wanted to give the political prisoners amnesty. New elections were held and the right wing under the leadership of General Papagos came to power. When Papagos died in 1955, the young and unknown Constantin Karamanlis was assigned to form a new government. An electoral reform that excluded the small parties gave the Karamanlis party – the National Radical Union – a clear majority in the 1956 elections. Incidentally, the first election in which women had the right to vote. Karamanlis increased his majority at the subsequent 1958 election.

Throughout the Karamanlis reign, the country was strongly affected by the aftermath of the civil war. Opponents of the government were persecuted and suspected of being “Communist sympathizers” if left to the center. Arbitrary arrests were common and the number of political prisoners large. All attempts at amnesty or release of prisoners were rejected. During the 1961 elections, extensive pressure and electoral pressure was needed to secure Karamanlis’ re-election. But the assassination of the pacifist and the Lambrakis MP in Saloniki led to the fall of Karamanlis. The murder was set in the scene by senior military officials and police officers who stood near the Karamanlis government. It triggered an international protest and Karamanlis advised the Greek royal house to make a planned trip to England.

In the November 3, 1963 election, the Center Union, led by George Papandreou, won a clear victory over the Conservative ERE party. But the Center Union got only 42% of the vote. In order to avoid speculation that the party had to rule on the mercy of the radical EDA party, new elections were held on February 16, 1964. George Papandreou then got a 53% majority.

The death of King Paul brought Prince Constantine to power. He quickly turned out not to be very democratic and was completely dominated by his conservative mother, widowed Frederika. The Royal House and the military regarded the Central Union government as a threat to their position of power. When, in July 1965, Papandreou demanded to take over the post of defense minister in order to clean up the officer corps, King Constantine refused to agree to it, and Papandreou resigned. In contravention of the Constitution, Constantine began to appoint one Prime Minister after another – without printing new elections. The first two governments led by Novas and Tsirimokos were short-lived, the third under Center Union politician Stefan Stefanopoulos had a somewhat longer life before being felled due to joint action by right-wing Kanellopoulos and center leader Papandreou.

The climate is Mediterranean with dry summers and mild, rainy winters. The annual rainfall can be up to 1,800mm. The mean annual temperature in Athens is 17.7 ° C. In summer, heat waves of up to 45 ° C can occur in Greece. 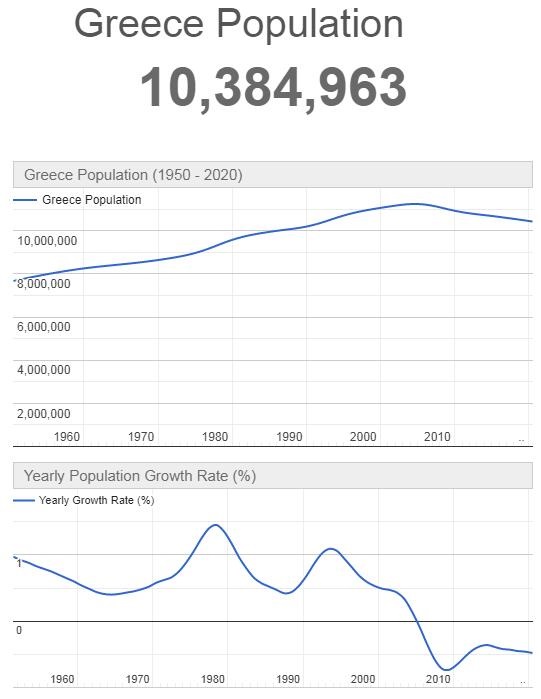