Belarus. President Aljaksandr Lukashenka showed his distaste for the United States by not inviting the US ambassador to New Year’s reception for foreign diplomats. Instead, Lukashenka’s regime came to strengthen its relations with US enemies during the year.

Following the terrorist attacks in the United States on September 11, US and Israeli intelligence agencies pointed out Belarus as the main arms supplier to Islamic extremists. During the first half of 2001, Belarus has signed contracts with Arab, Palestinian and Albanian Muslim extremists for approximately SEK 3.8 billion. In May, Belarus and Iraq signed an agreement on economic cooperation and in June, Lukashenka announced that Belarus had promised credit from Libya. When Belarus was isolated by the West because of Lukashenka’s authoritarian rule, the regime’s willingness to sell weapons to the enemies of the Western world apparently increased.

Former criminal investigators at the Belarussian Prosecutor’s Office claimed in June that three of President Lukashenka’s missing political opponents had in fact been shot by death patrols linked to the country’s top leadership. It involved a former Interior Minister, a former Deputy Prime Minister and a photographer who worked for the President. The respondents, who received political asylum in the US, said that the investigation into the disappearances was stopped by one of the president’s employees. The US State Department declared that the information was credible, but it was denied by Lukashenka.

Several times during the year Lukashenka accused the OSCE of funding the country’s opposition and conspiring to overthrow him. The OSCE sent about 300 observers to the Belarusian presidential elections in September, criticizing the election campaign for lack of transparency and justice. According to the official result, Lukashenka won 75% of the vote, while the main challenger Vladimir Gantjarik received just over 15%. Gantjarik accused the authorities of electoral fraud and unsuccessfully demanded re-election. After the election, Lukashenka appointed Deputy Prime Minister Henadz Navitski as new head of government.

President Lukashenka expressed considerable power ambitions early on and quickly came into conflict with the Supreme Soviet. In May 1995, Lukashenka conducted a referendum on four issues: the introduction of the right of dissolution for the president in relation to the Supreme Soviet, the introduction of Russian as the second state language, the reintroduction of a variant of the old state symbols of the Soviet era, and closer integration with Russia. The population voted in favor of all four proposals. At the same time, parliamentary elections were held. Lukashenka called for a boycott of this election, and only after four rounds of elections in December 1995 were enough representatives elected to the legislative power to make a quorum.

In November 1996, Lukashenka conducted a new referendum in which Belarusians were asked to decide on a strengthening of the presidential power, at the expense of the power of politicians. According to official figures, 70.5 percent of voters supported Lukashenka’s proposal to amend the Constitution to give almost dictatorial powers to the president. Despite strong protests and allegations of electoral fraud, Lukashenka appointed a new National Assembly. Communists, liberals and nationalists united in opposition to Lukashenka and criticized his authoritarian regime, but lacked strong leaders in the fight against the president.

In 2001, presidential elections were held, and Lukashenka was re-elected with 75.6 percent of the vote. Following a controversial referendum in 2004, a constitutional clause was removed that prohibited a president from sitting for more than two consecutive periods. This allowed Lukashenka to stand for election for a third term in 2006.

Against the presidential election in 2006, the opposition united and voted with one joint candidate; Aljaksandr Milinkevich. But the opposition had little to oppose Lukashenka’s authoritarian politics and media censorship. According to the official election results, Lukashenka received 82.6 percent of the vote.

At the 2010 presidential election, nine candidates opposed Lukashenka. For the first time since the 1994 elections, debates were held between the candidates on state television and radio, though without the president’s participation. Independent polls ahead of the election showed that Lukashenka had the support of nearly 50 percent of voters, while the rest of the population dispersed at the other candidates. The election result was significantly better for the incumbent president, receiving 79.7 percent of the vote.

The election results led to major protests in Minsk, which were immediately and brutally beaten down by police and special forces. Many hundreds of people were arrested, as were seven of the presidential candidates, and several were sentenced to several years in prison, accused of being called for a coup d’etat.

The Belarusian opposition has become increasingly difficult under Lukashenka. A number of opposition leaders have been arrested or exiled. However, the opposition has also struggled with relatively limited popular support and in finding a unifying leader. The situation of the media and civil society is also very difficult in today’s authoritarian Belarus. Regime-critical newspapers are routinely shut down, and many organizations have had trouble getting the government’s permission to work. 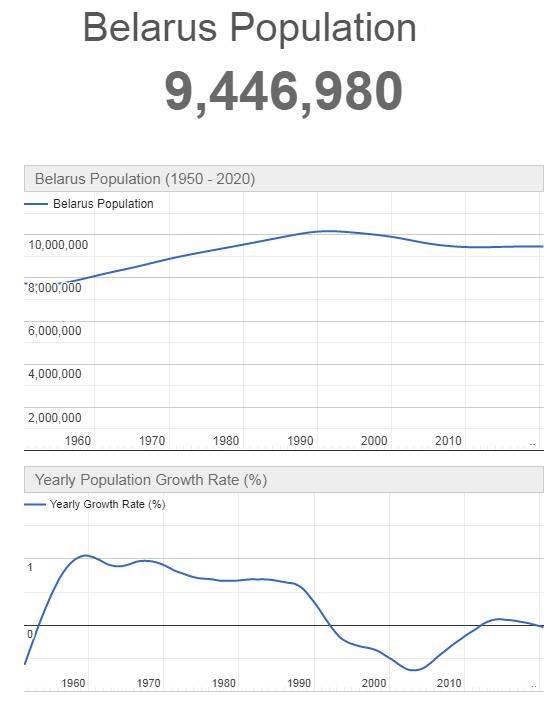