Togo. After the opposition boycott of the 1999 parliamentary elections, new elections would have been held in 2000. It was postponed for “technical reasons” and moved to October 2001. In August, however, the government announced that the election was postponed again, now to March 15, 2002, due to lack of preparation.

With the support of the World Bank, a US-Togolese consortium in November decided to build a new container port in Togo’s capital Lomé for $ 100 million. The new port will be ready for operation in December 2004.

In 1998, the Legislative Assembly passed a new press law prohibiting arbitrary arrests of journalists and other police offenses, such as the nightly “visits” by security forces without legal basis. The June presidential election was heavily criticized by the opposition, which characterized it as a scam. It was won by Edayema ​​with 52% of the vote, while Gilchrist Olympio – the son of the assassinated president – lost. The following months were marked by frequent demonstrations by the opposition against the alleged fraud election.

In November 1999, thousands of students and teachers defied the ban on participating in a protest demonstration due to the delays in teacher payouts and with demands for improvement in teaching quality. However, despite some further manifestations of dissatisfaction, the situation seemed to be normalized throughout the year.

The implementation of a summit among the Francophone countries in West Africa in March 2000 became a diplomatic success for the Edayema ​​government. The summit was attended by Togo, Benin, Niger, Burkina Faso and Côte d’Ivoire. For Togo, it allowed for closer relations with neighboring countries.

An international commission of inquiry concluded in February 2001 that after the 1998 elections, systematic human rights violations took place – including Sumar executions, torture of prisoners, rapes and abductions.

In August 2001, the government announced that Eyadema respected the constitution and abdicated its mandate in 2003. the constitution could not stand again as president. Prime Minister Kodjo caused stir when he announced his support for a constitutional amendment that would allow the president to stand for another term.

A month later, 68 children aged 18 months to 17 years were sent to Togo after being rescued from a sinking boat. They are believed to be victims of child labor smugglers. Many bodies were also discovered in the boat. The trafficking of children takes place predominantly in the border area against Benin and is one of the country’s biggest problems. In mid-2001, the government provided funding for an NGO working for the protection of minors, and it also increased the number of naval police and soldiers working to prevent this trade.

Elections were to be held in October 2001, but this was canceled. In March 2002, a joint commission resumed its work. It consisted of both people from the government and the opposition, and had been reduced following the political crisis of the 1998 elections. The Commission met in Lomé with the aim of “reviving the political dialogue”, through the organization of legislative work. The opposition had refused to join the National Electoral Commission until the opposition leader and lawyer Yawovi Agboyibo was released. He had been arrested by the authorities on August 3, 2001. Agboyibo was released on March 16, 2002, and the opposition then declared himself willing to resume dialogue with the government. 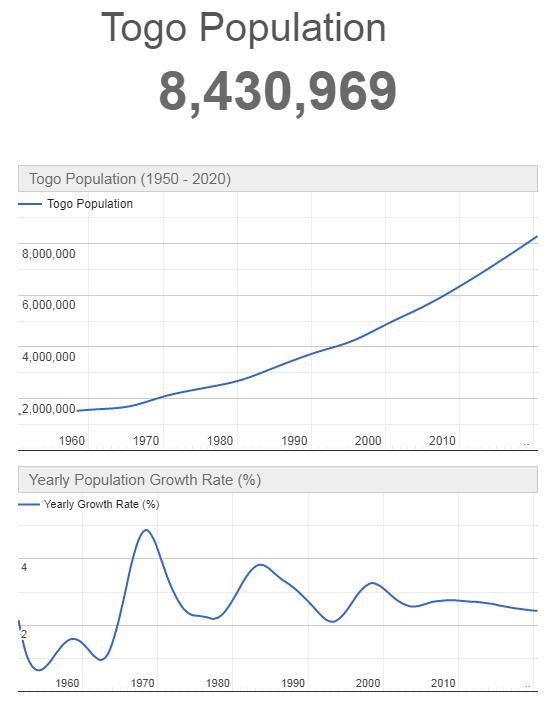