Tanzania. Tanzania’s rapid economic progress since 1995 was rewarded with $ 1.1 billion in aid for 2001–02, an increase of more than a third. The money will be used for, among other things, health care and education. However, no aid was allocated to the autonomous region of Zanzibar, where the 2000 elections received harsh criticism. In January, around 40 people were killed on the islands of Zanzibar and Pemba when demanding new elections. The lenders’ pressure seemed to have worked, because in October the ruling party Chama Cha Mapinduzi (CCM) and the Zanzibar locally strong Civic United Front (CUF) agreed to conclude peace and jointly draft new electoral laws. Election elections shall be held at the seats in Zanzibar’s local parliament that CUF refused to take.

In July, the gold mine Bulyanhulu went into operation. It is estimated to produce over 10,000 kg per year. With a total production of over 30,000 kg, Tanzania becomes Africa’s largest gold producer after Ghana and South Africa.

In March 2001, the CCM entered into an agreement with the main opposition party in Zanzibar – the United Civil Front – with the aim of ending the political violence on the semi-autonomous island around Zanzibar. The parties decided to set up a joint committee aimed at restoring calm and allowing the 2,000 who had fled to Kenya to return. In Dar es Salaam, in April, the first joint demonstration by the opposition was held in decades. The opposition called for reform of the constitution and the Labor Party called for a whole new constitution and the establishment of independent electoral commissions.

In July, a new large gold mine – the Bulyanhulu mine, was opened. It hit the country with Africa’s third largest gold producer. The Bulyanhulu mine was purchased by Canadian Barrick Gold Corporation, which invested $ 280 million. US $ in it and then planned to extract 400,000 ounces of gold annually.

In November, Mkapa in Arusha, together with the presidents of Uganda and Kenya, set up a regional East African parliament and a regional court. Observers pointed out that the agreement between Tanzania, Uganda and Kenya was a first step towards the creation of a common market between the three countries with a total population of 80 million. people.

A month later, the British press reported on the sale of a military air control system to Tanzania at a cost of 28 million. £. The trade sparked protests, arguing that the system was redundant, but the British government approved the sale anyway. A World Bank report was leaked indicating that a similar civil system could be acquired for one-eighth of the price.

At the beginning of 2002, National Bank Governor Doaud Ballali declared that Tanzania’s national economy had made great progress in the previous seven years. Acc. Ballali, inflation had dropped from 30% in 1995 to 4.7% in 2002, and the economy now grew by over 5% annually – above the African average. In the financial sector, the number of banks has grown substantially – from 1 in 1993 to 20 at the beginning of 2002. In addition, 12 other non-bank finance houses were added.

In January 2004, Zanzibar celebrated the 40th year of its independence while accusing the United Civil Front of misusing the island’s economy. The daily average income on the island equals 60 US cents.

In March, Tanzania entered into a customs union with Kenya and Uganda. The three countries have a combined 90 million. population and an annual GDP of 25 billion. US $.

In April, Tanzania celebrated the 40th anniversary of the Zanzibar-Continental Association. President Mkapa took the opportunity to call for the preservation of the unit at all costs. Shortly before, Zanzibar’s autonomous government had declared that by the end of the year the island would introduce its own flag and cease using Tanzania. The autonomous government insisted that the constitution allowed the island to “have its own identity”. 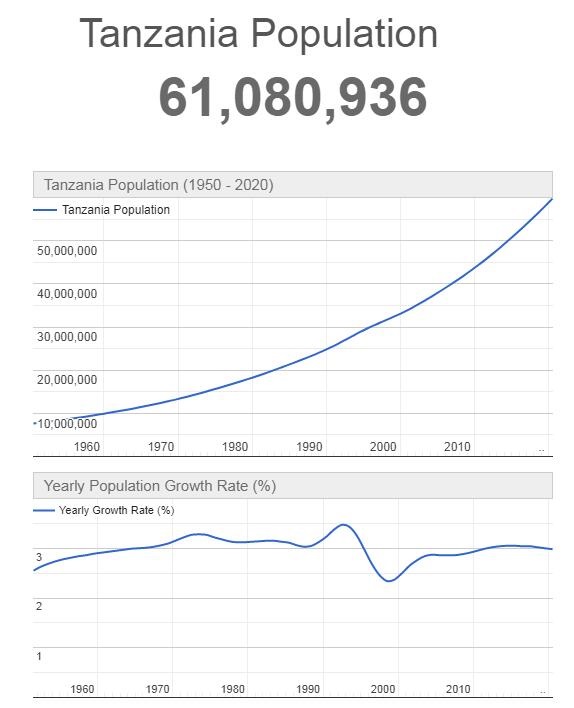