Tajikistan. After another year of drought, the Red Cross warned in August that one million people could die of starvation if they did not receive food aid. The situation was reported to be worse than the year before, when Tajikistan was haunted by the worst drought in over 70 years.

The country was in international focus like never before with the terrorist attacks in the United States on September 11 and the US bombing war in Afghanistan. President Imomali Rachmonov expressed his support for the US fight against terror, but Tajikistan did not openly join the anti-terror alliance, even though it was reported that American planes landed there. After the civil war between 1992 and 1997 between the regime and Islamists, the situation in Tajikistan has been unstable. The country’s militant Islamists have been linked to the terrorist network of Usama bin Laden and to the Afghan Taliban regime, and the border with Afghanistan in the south is being guarded by the Russian military in cooperation with Rachmonov’s government.

The Afghan war increased the already large number of refugees at the Tajikistan border. However, Rachmonov refused to admit them, referring to the risk of terrorists among the refugees. Russian President Vladimir Putin visited Tajikistan in October and was followed by US Secretary of Defense Donald Rumsfeld and US experts who inspected Tajik military bases. The government explained that it was possible to open its bases to the United States.

According to the UN, 83% of Tajikistan’s residents live in poverty with an unemployment rate of about 30%. The average monthly income corresponds to about SEK 100. Hundreds of thousands of Tajiks each year travel to other parts of the former Soviet Union in search of security, but at the end of the year, Kazakhstan closed the Tajikistan-Russia railroad after seizing Afghan travelers with fake Tajikist passports. 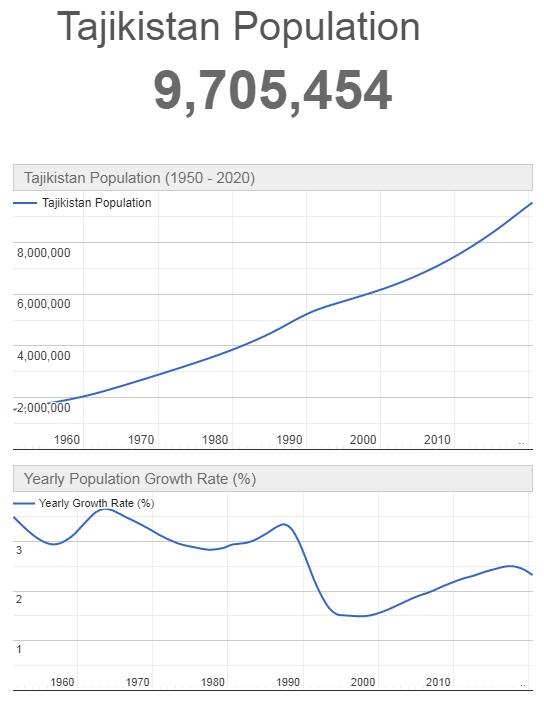