Syria. Thirteen of the country’s leading regime critics were arrested in August and September accused of trying in various ways to counter the country’s leadership. Among those arrested were Mamun al-Humsi and Riyad Sayf, MPs, as well as Riyad at-Turk, secretary general of the regime-critical faction of Syria’s Communist Party. al-Humsi and Sayf were tried in the fall, but no one came.

122 other political prisoners were pardoned and released in mid-November. Among them were members of the Syrian Communist Labor Party, the Muslim Brotherhood and the Iraqi branch of the Socialist Bath Party. Some of them had been incarcerated for 20 years. According to human rights organizations, 1,200 political prisoners remain in Syrian prisons.

About 160 of the 177 member states of the UN General Assembly voted Syria into the UN Security Council on October 8. Syria will take up the Council in January 2002.

Britain’s Prime Minister Tony Blair, during a visit to Syria on October 31, appealed to President Bashar al-Asad to stop the activities of militia groups such as the PFLP (People’s Front for the Liberation of Palestine) from Syrian territory. al-Asad defended the groups’ activities.

On December 10, al-Asad ordered the entire government to resign. The background was, of course, to judge the failed economic policy. However, the ministers had to retain their jobs until Prime Minister Muhammad Mustafa Miro had formed a new government.

In early February 2006, protesters set fire to the Danish embassy in Damascus in response to Denmark’s anti-Muslim campaign led by the Jutland Post. The embassies of Norway, Sweden and Chile in the same building were exposed to minor damage in connection with. fire. A week later, Denmark closed its embassy in the country, accusing the Syrian authorities of not wanting to guarantee the safety of the Danish embassy staff.

In August, al-Assad declared that Syria would be content with the return of the entire Golan area occupied by Israel since 1967. «Our desire for peace does not mean that we are giving up our rights. We only accept that the area that was ours until June 4, 1967 is returned. ” The declaration was a prelude to a possible resumption of peace talks with Israel that had been interrupted since 2000.

On September 6, 2007, Israel attacked an installation in the Deir ez-Zor province with fighter jets. Syria claimed it was an abandoned military facility. Israel claimed it was a nuclear reactor under construction by North Korean engineers. Syria invited foreign journalists to visit, and they saw nothing but an abandoned camp. Observers afterwards pointed out that the bombing could be an exercise before a possible Israeli air strike on Iran’s nuclear installations. In 1981, Israel bombed a civilian nuclear reactor in Iraq.

Hezbollah’s military commander, Imad Mughniyeh, was killed in February 2008 by a car bomb in Damascus. In January 2015, the Washington Post revealed that it was the CIA and Israel behind the execution that were a last-ditch thank to Israel’s military defeat to Hezbollah in 2006. The car bomb was manufactured by the CIA and stored in a spare tire. It was triggered by Mossad agents in Tel Aviv.

In April 2008, al-Assad confirmed to a daily newspaper in Qatar that peace talks with Israel had been ongoing for a year with Turkey as an intermediary. He further stated: “There will be no direct talks with Israel until a new president is deployed to the United States. The United States is the only party qualified to direct direct negotiations between us, and the Bush administration has neither the vision nor the will for peace. It has nothing ”. However, the negotiations eventually ran out into the sand because the Israeli government was unwilling to abandon its occupied territories.

On October 26, 2008, the United States launched an attack on Syria. The attack targeted a small village and cost 8 Syrians lives – including 3 children. Syria’s foreign minister accused the United States of carrying out a “criminal and terrorist” attack, and asked the UN to take up the matter in the Security Council, halting the procedure by the threat of a North American veto. The United States claimed the attack was carried out to curb the infiltration of foreign mujahedeen into Iraq. Acc. However, in the US, the number of «infiltrators» entering Syria has already dropped to one tenth of the level of the previous year. Some commentators pointed out that the attack occurred just 1 week before the US presidential election and could be a final attempt by the neoconservative government to cast votes for Republican candidate John McCain, for example. to provoke Syria to respond militarily again. Ifgl. international law strictly prohibits attacking military targets in another country. The only exception is “hot pursuits”, where an identified military target flies across the border to another country, and there was no such exception. Acc. UN statutes fell the United States’ attacks into the category of war on attacks and as such covered by war crimes.

Air strikes against Turkey’s “tools” in the Syrian war

A training camp belonging to the rebel alliance Faylaq al- Sham, which is allied with Turkey, is attacked by Russian fighter aircraft. SOHR reports that 78 rebels lost their lives. The attack in Idlib takes place despite a ceasefire between Turkey and Russia (see 6 March 2020). Faylaq al- Sham operate in, nor is a Syrian and has participated in Turkey’s three offensives on Syrian soil since 2016, which has been directed against the Kurds you create t itself autonomy e there. F robbery rebel alliance believed legos o ldater also been recruited to both Libya and Azerbaijan, where Turkey supports the parties in the ongoing conflict. Since Russia supports the opposing side in both countries believe the conflict analysts that the intention of attacking the rebels in Syria could have was the T to send a warning to Turkey. The Russian attack on Faylaq al-Sham triggers revenge attacks on areas held by the Assad regime and at least 15 deaths are reported there over the next 24 hours.

Adnan al-Afiyuni, a Sunni Muslim mufti in Damascus, dies when his car is detonated by a bomb. The Muftin has collaborated with the Assad regime and according to SOHR played an important role when reconciliation agreements were concluded with rebel groups around the capital during the civil war. In and around Damascus, bombings have been quite rare since the regime drove rebels from strongholds in and around the capital in 2018.

Attacks on civilian targets in Idlib carried out by the Syrian and / or Russian military were war crimes and may have constituted crimes against humanity, Human Rights Watch (HRW) claims in a report on 46 war incidents between April 2019 and March 2020 that claimed at least 224 civilian lives. . The organization believes that sanctions should be directed at military commanders responsible for the attacks (see 4 March and 6 March 2020 and 7 July 2020). A ceasefire concluded in Idlib in March has reduced fighting.

In the Kurdish-controlled area in the northeast, 631 Syrian prisoners are being released in connection with the jihadist movement Islamic State (IS). Those released have served at least half of their sentences, convicted of terrorist offenses, and are covered by an amnesty agreement reached with Arab clan leaders in the area (see October 5). More will be released.

Large fields have been ravaged by fire along the coast and inland Homs in the dry and hot weather. Several deaths have been claimed in the fires and about 25,000 people have been forced to leave their homes, according to the UN. President Bashar al-Assad declares a state of national disaster and promises aid, especially to growers whose crops have been lost.

Fierce fighting in IS haunts

In two desert areas, there have been clashes between forces fighting for the Assad regime and IS fighters in the past month. According to information to the exile organization SOHR, the fighting has claimed at least 90 lives. Russian fighter jet has struck IS resistance pockets.

Suspects in IS crimes are being tried in the United States

Two former IS members who grew up in London are on trial in the United States, accused of bestial murders of Westerners in Iraq and Syria, including four Americans. The two, who have been flown over from Iraq, are suspected to have belonged to a group that committed kidnappings and beheadings that were shown on online forums by IS for propaganda purposes. The group, whose alleged leader died in a drone attack in 2016, has been referred to as “The Beatles” because of its British English.

In the city of al-Bab 40 km northeast of Aleppo, close to 20 people die and up to 80 are injured when a car bomb explodes near a bus station. At least 13 of the victims are civilians. The area is one of several near the border where Turkey or allied militias have been in control of three Turkish military offensives in Syrian territory since 2016. The Islamic State (IS) previously held the city as part of the jihadist movement’s “caliphate”, and since Turkish loyalists took over -Bab 2017, several attacks have been carried out there. However, the Turkish offensives have mainly aimed to reduce the Kurdish influence in northern Syria, and Turkey tends to hold the Kurds responsible for events that take place there.

Syrian citizens will have to leave the overcrowded al-Hol camp, which houses relatives of IS jihadists. The message is given by one of the leaders of the Syrian Democratic Council (SDC), the political organization that dominates the Kurdish-led government in the area. According to the UN organization Ocha, almost half of the more than 60,000 people living in the camp are Syrians. Most are women and children. In July 2020, the UN stated that approximately 4,000 had been allowed to leave the camp during the past year. This has taken place after settlements with Arab clans that required security guarantees. Foreign nationals (Iraqis make up the largest group), on the other hand, will remain in al-Hol as long as there are no agreements with their home countries. Syrian IS members in Kurdish prisons will not be released. 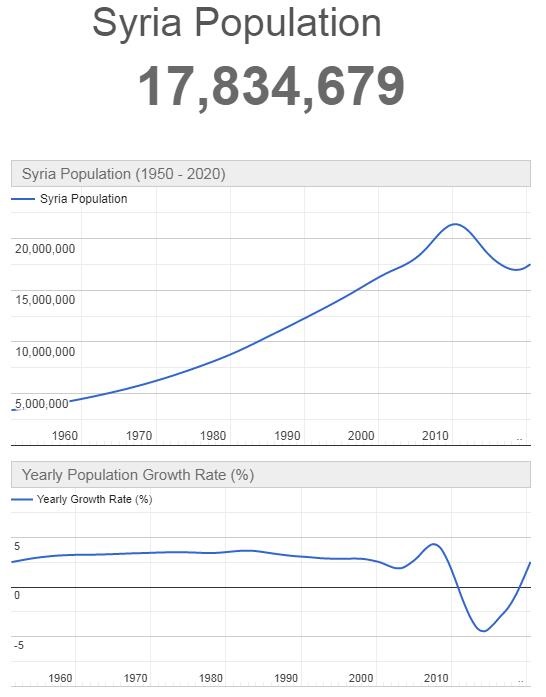