Singapore. Politically, this year was dominated by the weak opposition’s attempt to break the ruling party’s PAP power holdings and the effective, often criticized, methods of the government to respond to these. The prominent opposition man, the leader of the Labor Party, JB Jeyaretnam, was denied his appeal by a defamation judgment. Jeyaretnam was sentenced to pay high damages to PAP’s strong men, former Prime Minister and Prime Minister Lee Kuan Yew and current Prime Minister Goh Chok Tong, after accusing them of questionable loans to Indonesia. The judgment left Jeyaretnam in bankruptcy. With the unsuccessful appeal, he definitely lost his seat in Parliament and also resigned as party chairman. The PAP, which has ruled since 1965, had previously been accused of eliminating opponents by bankrupting them.

On November 3, the PAP won the expected election in Parliament, which was announced in October. PAP got 82 out of 84 seats. Opposition candidates were only 29 of the seats. The two remaining mandates were won by the Singapore Democratic Alliance and the Labor Party. Accusations were made that the opposition’s poor results were due to harsh restrictions on political activity and the media. 16 people were arrested by police for illegal political activity before the election.

Singapore’s formerly thriving export economy was hit by a severe recession, the worst in 30 years. It was mainly the decline in demand for electronic products, Singapore’s main export commodity, that caused the decline. The terrorist attacks against the United States, Singapore’s largest market, on September 11 shattered hopes of a speedy recovery.

In August, the government presented a ten-year economic plan called “New Singapore”. A type of government bond, “New Singapore” shares, was introduced that would be distributed among citizens to increase consumption. 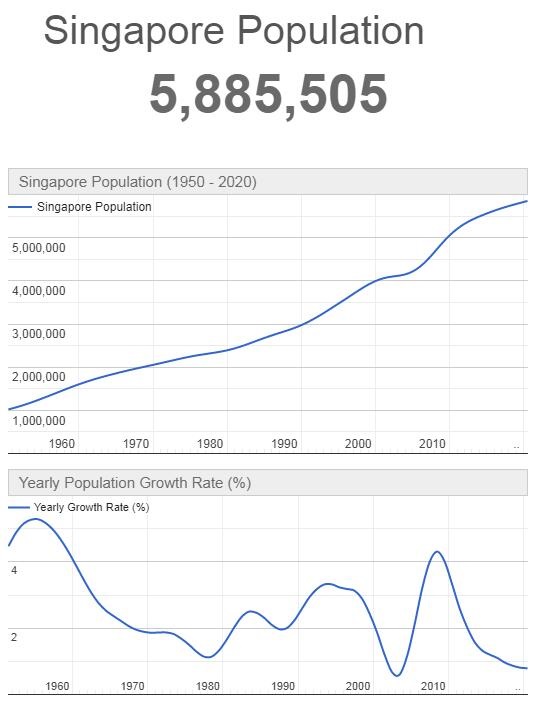 SINGAPORE. – From 3 June 1959 (see below) Singapore obtained a special statute, by virtue of which it became an autonomous state within the Commonwealth. A population of 1,634,000 inhabited today lives on an area of ​​only 581 km 2. (June 1960) in continuous rapid increase, residing for about 2/3 in the capital city. The density is very high, that is, equal to 2812 residents per km 2. It is made up mainly of Chinese (1,230,000), immigrants for the most part for a few decades, and the rest of Malays (227,300), Indians and Pakistanis (137,800) and Europeans (12,700). The island is well cultivated with hevea plantations, coconut palm and pineapple; the port is one of the most important in Asia and has the function of redistribution of some products of the subsoil (pond) and of the soil (rubber, pineapples), which flow to its quays from neighboring countries and are intended for international trade. Singapore has not only commercial but also industrial importance due to the fact that large tin foundries, canning industries (pineapples), textile and above all naval industries are installed in it for the construction of ships and marine machinery, for the repair and maintenance of boats.

History and order. – On the dissolution of the possessions of the straits for the incorporation of Penang and Malacca into the Malayan Union (later Federation) and of Labuan in British North Borneo, Singapore in 1946 was erected as an autonomous British colony under a governor assisted by an executive council, composed of members nominated by the Crown, and a legislative council in which, alongside nominated members, officials and non-officials, and members ex officio, there were some elected. The number of the latter was increased from 9 to 12 (out of a total of 26) on the occasion of the 1951 elections, and 2 elected members were also inducted into the executive council. In 1955 the number of elected members in the executive and legislative councils was increased, respectively transformed into the council of ministers and the legislative assembly. The council of ministers was given responsibility for all matters except external security and defense. The governor was given emergency powers.