Seychelles. The August/September presidential election marked a tight victory for President France Albert René, who, however, received only 3,000 more votes than his chief challenger, the Anglican priest Wavel Ramkalawan. The opposition accused the president and the ruling party of cheating and harassment of the opposition during election day. In September, Ramkalawan requested that the charges against René be tried in court.

In July 2003, the government passed a series of economic reforms aimed at reducing the state’s budget deficit. Three embassies abroad were closed and a new tax was imposed on imported goods, services and locally produced goods. Police arrested 4 members of the National Party, including Jean-Francois Ferrari of the Regar newspaper for collecting signatures against the new taxes.

In September, the body of Ferrari’s sister-in-law, Therese Blanc, was found by a beach. Against this background, the European Parliament’s Committee on Cooperation and Development asked President France-Albert René for a report on the current political situation and human rights in the country.

Seychelles was a member of the Southern African Cooperation Organization (SADC) until 2004, but resigned in July on the grounds that “it found no benefits in integration”. Before it could turn out, the country had to repay DKK 2.5 million. US $ to SADC.

In December, Southeast Asia was hit by a tsunami, and the tidal wave also reached Seychelles, causing serious fishing damage. Many boats were damaged or damaged. FAO initiated a program to repair or replace the damaged boats. In February 2005, it was estimated that the country needed $ 30 million. US $ to make the necessary reconstruction.

Seychelles confirmed in August 2005 that it had no opportunity to return to SADC due to continuing difficulties in meeting its financial obligations to the organization. The announcement had been made as early as the beginning of the year, but a possible agreement had been reached which was, however, ultimately not possible.

In May 2006, the concern increased for the chikungunya virus to reach the Seychelles. The disease spread with the African mosquito that was also a carrier of dengue fever. The disease had already hit 275,000 along the Indian Ocean by this time. Despite the fear of chikungunva, tourism – the country’s main source of income – continued to rise in 2007. However, the government warned that the continued rise of tourism should be handled carefully to avoid deterioration of the country’s environment.

The global economic crisis that struck in 2008 hit the country hard due to falling tourism revenue. At the end of the year, it did not have sufficient foreign currency to pay interest and repayments on its foreign debt. The IMF entered a rescue package of DKK 26 million. US $ and at the same time forced the state into drastic measures: 1,800 public servants were fired, government property sold, currency restrictions removed and the currency liquidated. In a few days, the price of a US $ increased from 8 to 16, effectively doubling the price of imported goods. In 2009, the economy shrank by 7.5%. The country was particularly hard hit as its foreign debt accounts for 175% of GDP. Tourism was further suffering from piracy in ever-increasing areas of the Indian Ocean.

WikiLeak’s 2009 US Embassy telegrams revealed that the superpower’s drone flights over Somalia and the Horn of Africa are based in Seychelles. 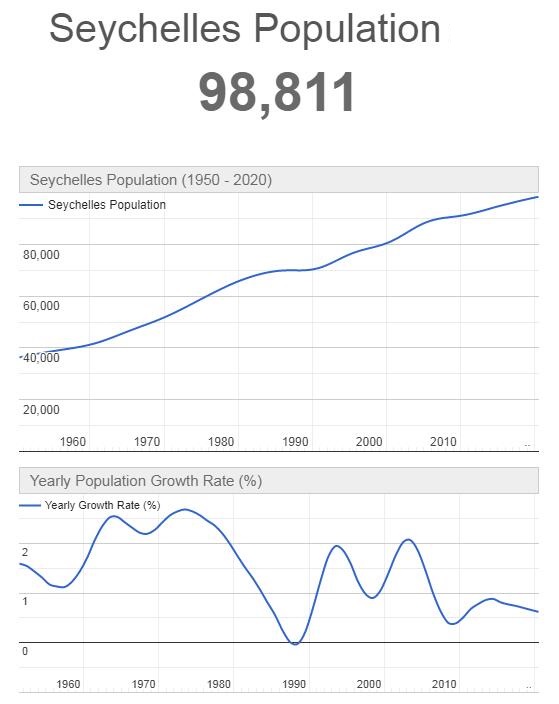