Senegal. In January, 96% of voters approved the new constitution in a referendum. The Senate was abolished, the number of members in the lower house was reduced from 140 to 120 and the presidential term was reduced from seven to five years. All restrictions on the right to form political parties were removed and for the first time women’s and men’s equal rights were guaranteed in the constitution.

Another ceasefire agreement was signed in March between the government and the Mouvement des Forces Democratiques de la Casamance (MFDC), which since 1981 fought for an independent Casamance in the south. Despite this, there were fights between the rebels and the government army for most of the year. Within the MFDC disagreement was over which line to hold in the peace talks with the government. These were also hampered by a power struggle within the separatist movement between its former Secretary-General Augustin Diamacoune Senghor and the leader of the armed branch Sidi Badjie.

The April 29 elections meant that President Abdoulaye Wade strengthened his grip on power. The Sopi Valalliance, which includes the President’s own party Parti démocratique sénégalais, received 89 out of 120 seats in Parliament and also won in 28 out of 30 ministries. Parti socialiste sénégalais, who lost the election in 2000 after ruling the country since independence, ended on 10 terms, while Moustapha Niasse, Wade’s prime minister in March, and his Alliance des forces de progrès got 11.

Senegal’s First President Leopold Since Senghor passed away on December 20 at the age of 95. Senghor, who was also a poet, was the country’s head of state for 20 years before he voluntarily left power. As a writer, he was a prominent member of the so-called non-ritual movement, in which his own African traditions were emphasized.

During the summer months from April to October, the country is in the zone of influence of the West African monsoons, which penetrate northwards. This brings abundant rainfall to the south of Senegal, while it leads to shower activity in the north.

In the winter months between October and April, dry, continental air penetrates south from the northeast; the harmattan is blowing, a dry, partly dust-laden wind. At the same time, cool and humid passatic air masses prevail on the coast.

Temperatures are between 22 and 27 ° C in winter on the coast and over 40 ° C at the end of the dry season inland. Humidity only occurs briefly in March and April.

The annual rainfall varies from 1,500 millimeters in the south to less than 350 millimeters in the north and northeast. The decisive factor for the country, however, is the variability of precipitation. Short periods of drought within a rainy season are also a significant risk for agriculture and can cause serious crop failures.

Alternation between wet and dry phases has been normal for the past 20,000 years; for a long time it was unclear whether the decrease in precipitation that has been recorded over the past 50 years was caused by humans or not. However, the slow aridization of the country has devastating effects on nature, people and the economy. 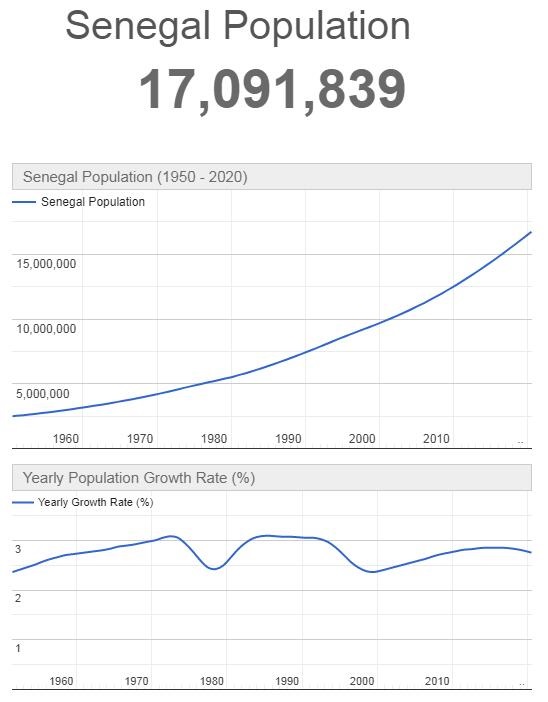 Demography and economic geography. – West African state. The young population (55% is under the age of 19) is growing at a rate of 2.9% per year: from 9,956,202 residents at the 2002 census it rose to 14,548,171 in 2014, according to an estimate by UNDESA, United Nations Department of Economic and Social Affairs. The urban population (43.4%) mainly affects the capital Dakar (3,137,196 residents) And the regions of Diourbel and Thiès. The improvement in living conditions has been progressive, however the literacy rate is 58%, access to water at 72% and life expectancy (63.5 years, 2013) still weighs on poverty (69% of the population) and inequalities (especially between urban and rural areas). Risk factors are represented by insecurity in Casa-mance and in the regional context (especially in Mali). The Senegal welcomes about 17,000 refugees from Mauritania.

Economic conditions. – Ranked among low-middle-income countries (GDP per capita with the same purchasing power, PPA, of $ 2,316 in 2014; 163 ° place of the Human Development Index), the Senegal has maintained a modest level of growth (on average, 3.3% in the last decade) compared to the countries of sub-Saharan Africa, which grew on average 6%. The mining sector accounts for 22% of GDP and constitutes a large part of exports: in 2012, 17.7% for gold, 14.6% for oil, 11% for phosphates (3rd producer in sub-Saharan Africa, with 920,000 t in 2013). The rest of the export is represented by fish (462,298 t, 2012) and agricultural products such as peanuts (10th world producer, with 673,000 t in 2012), sugar cane, cotton. Agriculture, affected by a demanding investment program, remains the main source of income for 49% of the workforce, even though the country is exposed to food crises from drought and recurrent floods. Important are trade (especially in the port of Dakar), industry (textiles, clothing, mechanics, petrochemicals), but also tourism (1 million admissions, 2011) and remittances abroad (10.2% of GDP). Strong development prospects concern energy and transport infrastructures.