James Beattie (1735-1803)
philosopher and writer. James Beattie was born in 1735 in Laurencekirk, the son of a small farmer. He studied at the University of Aberdeen and belonged to the philosophical direction of the Common Sense (“common sense”) – also called The Scottish School. He took a highly subjective point of view. Beattie, who also always campaigned against slavery and also acted as a romantic writer, died in Aberdeen in 1803.

Andreas Gordon (1712-1751)
theologian, physicist, philosopher. Andrew George Gordon was born into a noble family in Cofforach in 1712. Gordon first became a priest. After numerous studies in Salzburg and Rome, among others, he was appointed to Erfurt as a philosophy professor. He has written several works, including “Phaenomena electricitatis exposita” (1744). Gordon died in Erfurt in 1751, where today a school and a street are named after him.

Patrick Hamilton (1504-1528)
theologian. Patrick Hamilton was born in Linlithgow in 1504 to wealthy parents. He studied in Paris and traveled to Marburg to meet Martin Luther. Hamilton wrote a kind of Lutheran Small Catechism for Scotland, which was widely used. Thereupon he became a martyr because he was sentenced to death and burned as a heretic. Hamilton died in St. Andrews in 1528.

Henry Home (1696-1782)
philosopher and lawyer. Henry Home Kames was born in Berwickshire in 1696. His later mentors included Adam Smith and David Hume. “Principles of Criticism” was his main work, which was to inspire Johann Gottfried von Herder significantly. He co-founded the Royal Society of Edinburgh – Scotland’s Academy of Sciences. He also served as a judge at the Scottish Civil Court. Home died in 1782.

David Hume (1711-1766)
philosopher, historian. David Hume was born in Edinburgh in 1711 and became one of the most famous Scottish philosophers. The child of nobles studied law and dealt intensively with philosophy, especially that of the Stoics. Hume is one of the great scouts. Knowledge of people, which they gain from experience, formed the core of his point of view. “A Treatise on Human Nature” is one of his important writings. Hume, who was a close friend of Adam Smith and greatly inspired Kant, died in his native town in 1766.

John Knox (1505-1572)
The Scottish reformer John Knox was initially a preacher in Berwick-upon-Tweed and a supporter of Calvin. He worked on the creation of the “Geneva Bible” and became enemies with the Stuarts by publishing two works called “The Appellation of John Knox and an Admonition to England and Scotland” and “The First Blast of the Trumpet against the Monstrous Regiment of Women “. Although he was ostracized by the Queen on his return from Geneva, the people received him and his ideas enthusiastically. A treason trial against him ended in an acquittal and four years later the Queen was deposed, in which Knox was instrumental.

Johann Machabeus (shortly before or after 1500-1557)
theologian, reformer. Johann Machabeus was born as John Mac Alpine in the lap of nobles around the beginning of the 16th century. He studied theology and heard lectures from Martin Luther in Germany. He later followed the call to Copenhagen as professor of theology. Machabeus died in the Danish capital in 1557.

James Mill (1773-1836)
theologian, philosopher, historian, economist. James Mill was born in Forfarshire in 1773 and studied theology. He initially worked as a priest, later devoted himself to politics, but also to philosophy. He is seen as an ambitious advocate of utilitarianism. Together with Bentham, he campaigned for freedom of expression, freedom of the press and freedom of religion. Mill, who was the father of the famous John Stuart Mill, died in Kensington in 1836.

St. Mungo (6th century)
In the 6th century the Christian missionary St. Mungo, who was also known as St. Kentigern, built a church on the small brook Molendinar Burn, which became the nucleus of the later town. He is the patron saint and legendary founder of the city of Glasgow. His biography is uncertain, nor is it clear to what extent the stories that are told about him are true. He is said to have performed numerous miracles, which are still depicted on the city’s coat of arms today.

Thomas Reid (1710-1796)
Philosophical founder of the common sense direction. Thomas Reid was born in Strachan in 1710 and studied in Aberdeen, where he later taught. In 1764 his work “An Inquiry Into the Human Mind on the Principles of Common Sense” was published, with which he laid the cornerstone of his philosophy of common sense. Reid, who is considered a great enlightener, also taught at the University of Glasgow. Reid died in Glasgow in 1796.

Johannes Duns Scotu (about 1266-1308)
philosopher and scholastic theologian. Duns Scotu was born in Duns, Scotland, around 1266. After his ordination he studied and taught at the universities of Oxford, Paris and Cologne. He is considered a representative of nominalism and astutely championed the idea that reason depends on the will. Duns Scotu died in 1308. In 1992 Pope John Paul II beatified him.

Adam Smith (1723-1790)
moral philosopher, father of economics. Adam Smith was born in Kirkcaldy in 1723 and studied in both Glasgow and Oxford. At the age of 27, Smith became professor of logic and later of moral philosophy. The great enlightener made himself immortal through numerous works, including: “Theory of ethical feelings” (1759) and “The prosperity of nations” (1776). Smith raised economics to a separate subject. His philosophical approach was based on human self-interest, which would lead to economic progress. Smith died in Kirkcaldy in 1790.

Dugald Stewart (1753-1828)
Dugald Stewart was born in Edinburgh in 1753, where he later studied moral philosophy, among other things. Thomas Reid was one of his teachers. This shaped Stewart’s views tremendously. From 1785 he worked as a professor of moral philosophy and passed on his knowledge to students such as James Mill and Sir Walter Scott. Stewart, who was a respected exponent of the Scottish School (Common Sense Philosophy) and was considered extremely original, died in his native town in 1828. 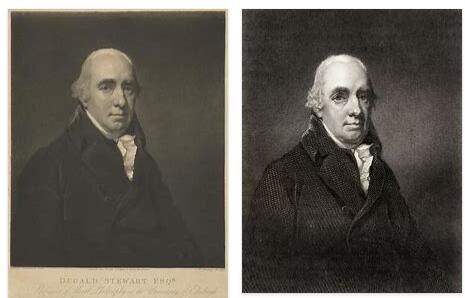