Rwanda. Four Rwandans were sentenced in June by a Belgian court to between 12 and 20 years in prison for participating in the 1994 genocide. Among those convicted were two Catholic nuns. According to Belgian law, the country’s courts can try human rights violations no matter where the crimes were committed. In October, Belgium extradited Protais Zigiranyirazo, brother-in-law of former R President Juvénal Habyarimana and one of the main suspects of the genocide. He was handed over to the UN Criminal Court in Arusha, Tanzania.

The first six Rwandans who got their sentences set by the UN High Court were flown to Bamako in Mali in December, where they will serve their sentences. Among them was former Prime Minister Jean Kambanda.

Since its inception in 1994, the UN Court has only been able to deliver a handful of judgments. In the courts of Rwanda, the judicial process has gone faster. Nearly 6,000 people have been tried and just over 500 have been sentenced to death. But still, 115,000 genocide suspects are being held in overcrowded prisons. At the current rate, it would take more than a century to investigate everyone. In October, therefore, about a quarter of a million people were selected, who after elementary legal training will act as judge in quick trials. The idea is a revival of a pre-colonial system, called gacaca, which was then used to resolve local disputes. Although it was considered necessary to speed up the judicial process, many doubted the possibility of “barefoot judges” to give real justice in such a complex case as genocide.

The old instigators of the genocide, the Hutu extremist militias, are still active. During the summer, the army fought back several attempts by the militia to enter Rwanda from neighboring Congo (Kinshasa), where they took refuge in 1994. The army claimed that it killed some 1,800 militiamen and captured thousands.

In an effort to reconcile, Rwanda received a new flag and a national anthem on the last day of the year. Colors and text, respectively, were intended to symbolize national unity, without any hint of ethnic groups. 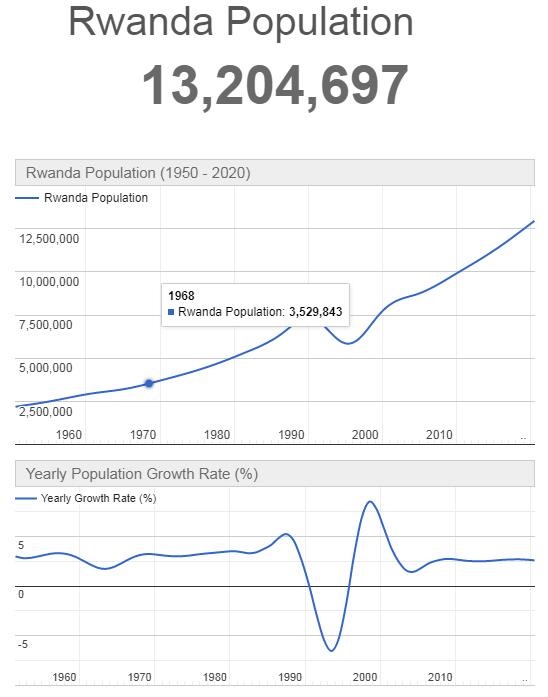 The interethnic civil war that broke out in 1994 and lasted just four months had a significant impact on the same demographic consistency as the Rwanda (6,604,000 residents In 1998). It is in fact impossible to ascertain the number of victims, which in any case is of the order of a few hundred thousand. To the dead must be added the numerous invalids caused by the war, as well as the temporary exodus of perhaps two million people, almost all of the Hutu ethnic group. The fugitives took refuge partly in Zaire (now the Democratic Republic of Congo) and in Burundi, partly in Tanzania and in other countries. In fact, the condition and fate of a large part of these refugees pushed by the situation to try to escape concentration in search of safer shelters remain unknown.

Inside the Rwanda the shuffling was very strong (the mass of people who moved is estimated at three million), both due to the spontaneous movements of the population, fleeing from the areas where the clashes were more violent, and due to of real deportations carried out by the military forces prevailing from time to time. The capital, Kigali, for example, has more than tripled its population in just a few months; however, since most of these have been movements dictated by emergency, it is difficult to establish whether the effects on population distribution will be permanent.

Before the 1994 ethnic explosion (the latest in a long series so far), the population of the Rwanda had an extraordinarily high growth rate, despite the scarcity of the country’s economic resources. After then, it is still not possible to have reliable data and it is necessary to rely on the inevitably uncertain estimates made by international organizations: the annual increase (1996) is just over 20%, with a birth rate of almost 40% and a mortality rate around 18%. Infant mortality is over 100% ; life expectancy is just over 40 years.

The economic conditions in the country are dramatic. At the end of the 1980s, the Rwanda had negotiated with the international financial organizations a series of readjustment interventions that had allowed him to benefit from credits (especially to deal with the bad economic situation in international coffee prices, almost the only exportable resource of Rwanda); this did not prevent the country’s economic conditions from deteriorating further and the already very modest average income per resident in the first three years of the 1990s from contracting by about a fifth. At the same time, all the other economic indicators worsened and the initiatives taken to tackle the recession ended up putting a further burden on the poorer classes.

The outbreak of hostilities then thwarted all efforts and practically eliminated the forms of modern economy, leaving the task of avoiding complete collapse to subsistence agriculture. Commercial production collapsed (coffee produced in 1995 was about one fifth of normal production, tea one third) and global GDP halved. In 1995 and 1996 the first modest signs of recovery were recorded, with a consistent increase in agricultural production (industrial production was and remains almost irrelevant and all destined for internal consumption), but not yet such as to recover previous levels. GDP also rose compared to the immediately preceding years, but without returning to pre-war levels.

The voluntary or forced return of Hutu refugees from the Democratic Republic of Congo, Tanzania and Burundi (a total of about one million) and Tutsis from Uganda and the Democratic Republic of Congo (where they had taken refuge on previous occasions, starting from since 1959) certainly does not facilitate the solution of the problems of organization and economic recovery. In conclusion, it is estimated that in 1996 the Rwanda was among the poorest countries in the world, for 85 % dependent on foreign aid, while at least half of the resources are destined to the maintenance of the armed forces.

The regional framework, in the meantime, has changed in such a way as to place the Rwanda within an apparently coordinated geopolitical front, together with Uganda and Burundi, in which a large part of the Tutsi components present in various capacities in the three countries: an institutional settlement of the area would perhaps allow the Rwanda to benefit from a favorable geopolitical position (even if not favorable, in itself, to the majority of the population, consisting of Hutu) which could be an essential condition for economic recovery.