Burma. The military junta seemed to begin to adopt a softer attitude towards the opposition. In secret, negotiations were held with the National League for Democracy (NLD) opposition party and up to 200 NLD members detained for several years were released.

Assessors noted that the releases were most often made in connection with foreign visits, and Amnesty International, among others, claimed that Burma still had between 1,500 and 2,000 political prisoners. The skeptics felt that the milder tone was merely an attempt to break Burma’s international isolation for the most urgent financial reasons.

The EU extended its financial sanctions until April 2002, but at the same time expressed support for the political dialogue and suggested that sanctions could be lifted if clear progress is made. At the same time, the EU gave up its opposition to Burma’s participation in international cooperation and approved Burma’s participation in the International Monetary Fund’s debt relief program.

In November, two senior generals and five members of government were dismissed. The dismissals were interpreted as yet another attempt to strengthen B’s international reputation by fighting corruption and against people who criticized the dialogue with the opposition.

An article in the new constitution of 1994 stated that presidential candidates should have lived the previous 20 years in the country, could not be married to foreigners or have children with foreign citizenship. The article was obviously aimed at Aung San Suu Kyi, who was married to an Englishman and had lived outside the country for a number of years. The military junta had a meeting with her in September 1994 – for the first time after she was arrested. However, no agreement was reached on the new constitution.

In July 1995, Aung San Suu Kyi was released from her house arrest and she called on the Council to Restore State Law and Order (SLORC) for dialogue. It was rejected and the council responded again by arresting dozens of dissidents and by retaining the ban on political debate.

At the beginning of the year, a party affair in Manerplaw was taken over by SLORC. The fall of Manerplaw was a serious blow to the opposition, as the guerrilla base had also been home to democratic activists and to several popular organizations associated with the various guerrilla organizations. In January 1996, the government secured a secret agreement on Khun Sa’s surrender. He was known as the “king of opium” and the leader of the Chan guerrilla.

Larger crowds – sometimes up to 10,000 – met regularly in May and June in front of Aung San Suu Kyi’s house to express their support for her. In June, the SLORC banned statements directed at the government, threatening to completely ban the activities of the NLD and arrest its members for illegal association. In July, Amnesty criticized the government for detaining hundreds of NLD members. In some cases, just to watch videos with Aung San Suu Kyis talking in their private homes.

The military was now seeking to exploit the weakening of the NLD by convening monthly press conferences for the national and international press, which SLORC had characterized as tendentious until recently. In 1996, SLORC sought to promote public construction and the real estate market – the center for drug laundering money laundering. Both state and foreign investment were thrown into this sector.

The same year, the military junta ordered 250 NLD members arrested for planning to celebrate the party’s victory in the 1990 elections. The regime also passed a law banning the NLD’s political meetings.

Still, thousands of Aung San Suu Kyi’s supporters continued to gather in front of her house. Furthermore, the NLD succeeded in laying the foundations for a new constitution, according to which the armed forces would not be able to participate in government work. However, the military junta refused to enter into a dialogue, demanding that the military continue to play a prominent role in the country’s political life.

The arrests of NLD members continued in 1996, and the government increasingly imposed restrictions on Aung San Suu Kyi’s activities until it banned her from using the phone.

SLORC was gradually subjected to increasing international pressure – especially from the US and the EU – and in 1997 the junta made a number of concessions. In September, it allowed the NLD to hold its first congress for seven years, although only half of the 600 delegates were allowed to participate. Amnesty International urged the UN to put pressure on the regime to release 90 prisoners of conscience and some 1,200 political prisoners.

In a bid for renewal, the junta disbanded at the end of 1997, and instead created the State Council for Peace and Development (SPDC). In July of that year, the country joined the Southeast Asian Countries Cooperative, ASEAN.

In early 1998, inflation rose significantly as a result of the stock market crisis in Southeast Asia. At the same time, the rice harvest was far less than anticipated. Rice is the country’s most important consumer product and export item.

In August 1998, the military launched a violent campaign against Suu Kyi, which had been detained at a roadside check when it tried for the fourth time to leave the capital to meet with its supporters. The junta characterized Suu Kyi as “the number one enemy of society”. Government newspapers announced that those who met her “will not live long”. 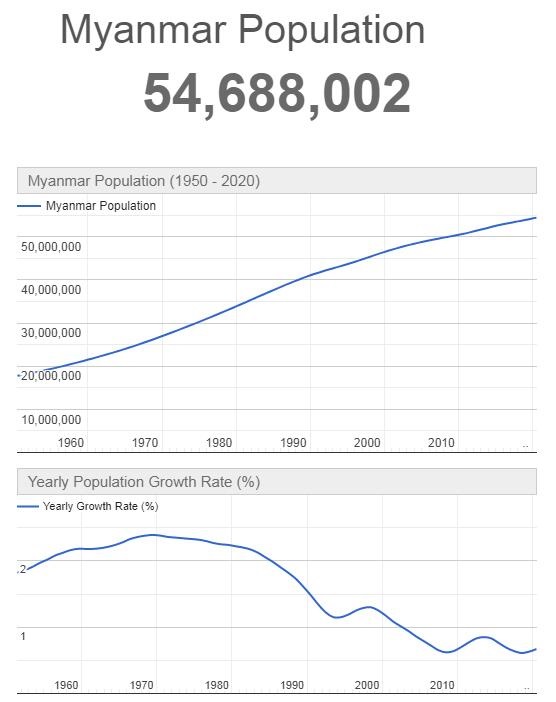