Mongolia. Mongolia experienced its second severe winter in a row. More than half a million livestock died as the temperature dropped to −50 ° C and the pastures were covered by snow depth. The winter weather caused major problems for the supply of food and medicines. Livestock deaths were a severe blow to an already strained economy.

The International Monetary Fund gave Mongolia access to cheap loans of nearly $ 40 million over the next three years to stimulate growth and alleviate poverty.

In May, President Natsagijn Bagabandi was re-elected with 58% of the vote. The former Communist has won respect in aid circles for his determination to implement economic reforms.

Domestic violence against women is a growing problem. It is estimated that 10-24% of murders in Mongolia occur at home. In 1998, killing of women accounted for 8% of all homicides. This figure had risen to 17% in 2001. More than 60% of domestic abuse is caused by alcoholism.

In 2001, the government set up a human rights center linked to the prison service. By 1999 alone, 200 prisoners had died in the prisons. In the first year alone, 180 prison staff received tuition at the center. The Constitution prohibits torture, degrading treatment or punishment, and although reports of such abuses have decreased in number, the number of reports of unnecessary violence against prisoners has remained unchanged – especially in rural areas. In 2002, the Prison Service installed cameras in 11 of the 17 state prisons, which helped reduce prison staff abuse.

In November 2002, more than 50 Democratic Party members were arrested while demonstrating for privatization of the land. The Privatization Act came into force in May 2003.

In January, after two years of negotiations, a new labor market policy was introduced that allowed Mongols to seek employment in Taiwan. Out of the 7,000 Mongolian workers, 3,000 had entered through the new program.

The May 2005 presidential election was won by Nambaryn Enkhbayar of the People’s Revolutionary Party with 53.4% ​​of the vote, followed by Mendsaikhany Enkhsaikhan of the Democratic Party who got 20% of the vote.

In November 2005, George W. Bush became the first North American president to visit Mongolia. During his meeting with Enkhbayar, Bush thanked Mongolia for its support for the invasion of Iraq and for its deployment of a contingent of 100 soldiers there.

The Revolutionary People’s Party dissolved the government coalition in January 2006 and continued to govern with the support of two smaller parties. At the same time, Miyeegombo Enkhbold from the People’s Party was appointed as new Prime Minister. The opposition criticized the People’s Party for creating a political crisis aimed at stopping the corruption investigations the coalition had otherwise initiated. 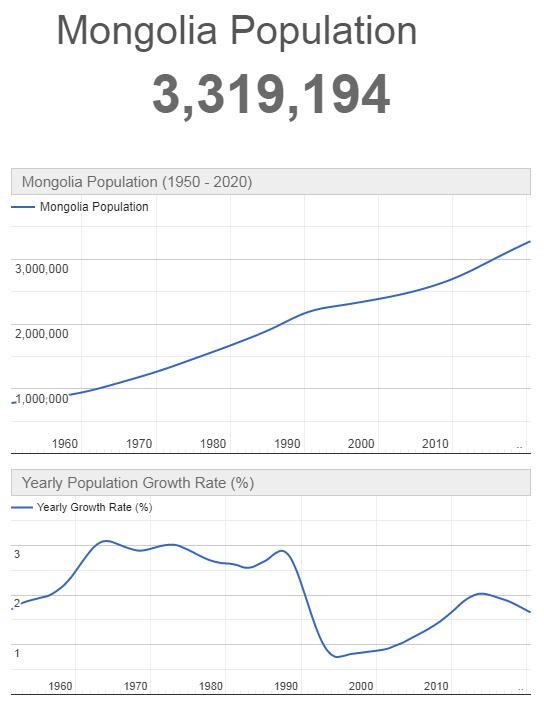