Luxembourg. In September, the L.A. authorities destroyed thousands of banknotes that had been secretly printed for 20 years should the monetary union with Belgium collapse. It revealed Prime Minister Jean-Claude Juncker in December, just before the euro replaced the Belgian franc. Luxembourg had shared currency with the neighboring country since 1921. At one point, in connection with the crisis in exchange rate cooperation ERM in 1993, Luxembourg also threatened to withdraw from the monetary union, Juncker stated.

Luxembourg continued during the year to oppose an EU agreement on cross-border information exchange on foreigners’ bank accounts.

In August 2007, the EU Statistical Office published figures for GDP within the Union. Luxemburg placed in first place and was 280% above average.

The June 2009 parliamentary elections gave a slight boost to the Christian Democrats who continued in government.

Luxembourg was also hit by the global economic crisis in 2008. GDP fell by 4.5% in 2009. Nevertheless, the crisis became more limited than in the rest of the EU. Throughout 2009, unemployment remained just over 5% – below half the EU average. Only in the Netherlands and Austria was it lower.

Prime Minister Jean-Claude Juncker resigned from the post in July 2013 when a spy scandal shook the country. Already in November 2012, the local media had been able to report that in 2007, the head of the country’s intelligence service Marco Mille had recorded conversations between Juncker and Grand Duke Henri with a tape recorder stored in a wristwatch. Juncker later found out that Mille had recorded the meeting, but had not taken any further action. Parliament therefore set up a commission of inquiry to investigate intelligence. The Commission’s report was published in July and contained highly stressful material. The service continued to hold an extensive archive of “political espionage” targeting individuals during the Cold War,

The subsequent parliamentary elections in October were won by Juncker, whose Christian Democratic Party declined 4.4% to 33.6%. Although the party remained the largest in parliament and Juncker wanted to continue in office, he could not get a majority. Instead, in December a coalition government joined the Social Democrats, the Liberal Democratic Party and the Greens. The three parties had a total of 32 out of the 60 seats of Parliament. It was the first time since 1979 the Christian Democrats were in opposition. It is presumed that the new government will allow marriage between gays (Prime Minister Xavier Bettel is already gay), replace Christianity education in primary school with teaching ethics and reduce state spending to maintain the country’s AAA rating with the international rating agencies. 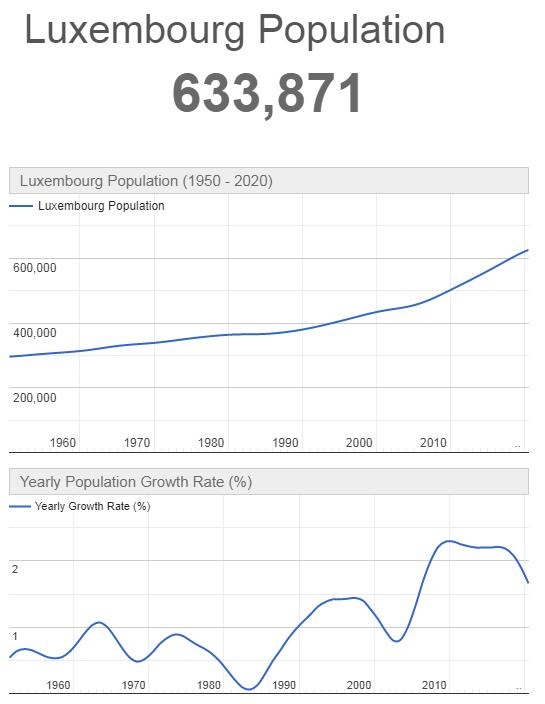 Population and its distribution. – The population has risen from 169,700 residents in 1840 to 299.993 in 1930. In that year, as mentioned, the density was 116 residents per sq. km. The thirteen cantons, into which the Grand Duchy is divided, show considerable differences in population density, as can be seen from the following table:

Omitting the canton of Luxembourg city for obvious reasons, we observe how the highest densities are offered by the industrial cantons: the one of Esch excels with 432 residents per sq.km.; of the 14 municipalities making up the cantonal unit, 9 have more than 100 residents per sq. km.: they are the municipalities of Luxembourg heavy industry, in which the greatest demographic increases are also noted between one census and the next. The cantons bordering the Moselle also show high figures, in excellent environmental and agricultural conditions: Remich with 85 residents per sq km; Grevenmacher with 73. Northern Luxembourg, on the other hand, is far from having such high figures: almost without exception the Eisling (the entire cantons of Clervaux and Wiltz and partially those of Vianden, Diekirch and Redange) has densities of less than 100 residents. per sq km: of the 52 municipalities making up the 5 aforementioned cantons, only 4 have more than 100 residents per sq. km. Even for the small state, therefore, the relationships between the physical-economic environment on the one hand and the demographic environment on the other are clearly demonstrated.

In Luxembourg there is a lack of large urban agglomerations, also because industries have spread over a large number of small establishments. Out of 126 municipalities, in 1930 only 2 exceeded 20,000 residents. and they had a total of 83,618 residents, that is almost 28% of the total population; another 3 had a population between 10 and 20,000 residents. and 4 between 5 and 10,000; 97 centers instead presented from 500 to 2000 residents each, making up 34.5% of the total population. The two municipalities exceeding 20,000 residents are those of Esch (29,369 residents in 1930) and Luxembourg city (v.), with 54,249 residents The first is the most important industrial center of the country, built in the iron area, in contact with the large urban agglomerations of Lorraine. All the other Luxembourg centers have a few thousand residents each: the most important are in the area of ​​iron and heavy industry, such as Rumelange (5,209 residents), Differdange (9197 residents), Dudelange (13,782 residents), Petingen (11,000 residents). On the Moselle, in the vineyard region, we will remember Remich (1751 residents), Grevenmacher (2819 residents), and further north, on the Sure, Echternach (3092 residents), founded around a Benedictine abbey of the seventh century; also on the Sure, Diekirch (3835 residents), in the midst of woods and fmtteti, and Ettelbruck (4620 residents); then Vianden (1104 residents), dominating the Our; Wiltz (4134 residents), Center of the wool industry; Clervaux (Clerf, 1717 residents), On the river of the same name, dominated by the old imposing castle of the counts of Lannoy.