Liberia. In May, the UN imposed a series of sanctions against Liberia as punishment for its support for the rebel movement RUF in Sierra Leone. All trade in Liberian diamonds was banned, as well as arms sales to the country. High representatives of Liberia’s government and armed forces were prohibited from traveling abroad. According to the UN, L’s diamond export was six times greater than its own production. The surplus was estimated to consist of illegally mined diamonds from Sierra Leone, which financed RUF’s continued armed activity in violation of the 1999 peace agreement. The sanctions would continue to be in force for one year.

The relationship with Guinea, which has been strained for several years due to rebel movements in the border area, deteriorated again in February. L. accused Guinea and Sierra Leone of supporting Liberian rebels who attacked cities and villages in Lofa County in the northwestern part of the country. Ambassadors from both countries were expelled from Liberia. Clashes also occurred between Liberia’s and Guinea’s regular armies. The conflict threatened to develop into a regional major war. The fighting drove thousands of civilians into flight.

The Swedish ship Alnar was caught in the eye in June when, with about 150 Liberian refugees aboard, it traveled along the West African coast for several weeks before being allowed into port in Lagos, Nigeria. The ship was not allowed to take passengers, and the conditions on board were unbearable. The Swedish captain claimed that the authorities in Liberia forced him to take the refugees on board.

The fighting in the border area improved after a few months but flared up again towards the end of the year, now however as an internal Liberian conflict. 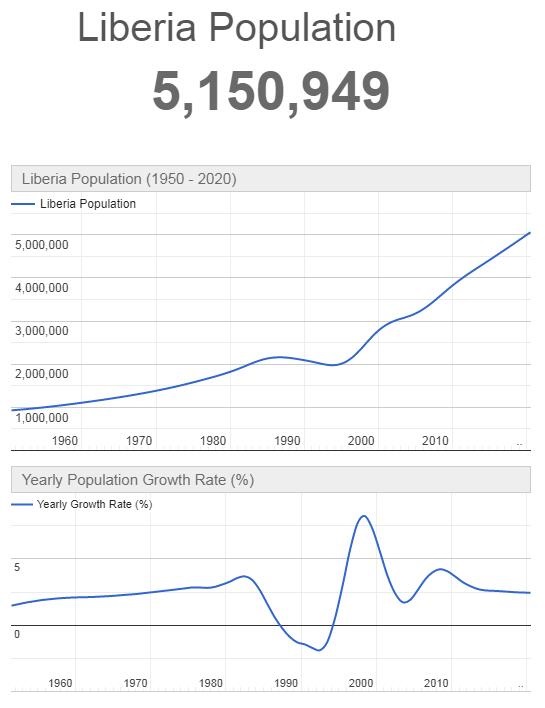 Led by President Tubman, Liberia continued its socio-economic development while maintaining an almost exceptional political stability for Africa. Tubman pursued the policy of gradual unification, undertaken since the beginning of his presidency (1944), aimed at increasing the participation of the native population in national life: the deputies of the provinces of the interior admitted to the Chamber of Representatives starting from 1945 were increased from 3 to 13 (out of 39) in 1960 (suffrage had been expanded in 1947); from 1964 the provinces of the interior were equated with the coastal “counties”. Parallel to the economic development of the country, for which foreign investments were favored, mostly from the United States, progress was made in social legislation (from 1961 the right to a pension was guaranteed and in 1963 a modern labor code was introduced) and in the recognition of trade union rights. In 1966, however, a strike by the employees of the Firestone Fire and Rubber Co., The largest agricultural-industrial company in the country, caused unrest, severely repressed by the government, which induced the president to assume exceptional powers for a year; in 1967 Tubman was re-elected president, for a sixth term, as a candidate of the True Whig Party now it has become a single party, to which all the members of the Senate and the House of Representatives belong. Liberia expanded its diplomatic relations (from 1964 relations were also established with the USSR) and was in solidarity with the process of decolonization of African countries; in May 1961 it welcomed the conference of moderate African states (the so-called Monrovia group) and later increased its prestige by sometimes carrying out mediation work; a visit by Tubman in March 1968 confirmed the persistence of good relations with the United States.

Upon Tubman’s death (23 July 1971) he was succeeded by WR Tolbert, by his side as vice-president since the first election. While maintaining the continuity of the regime, Tolbert introduced a more democratic style and a line of greater social sensitivity than Tubman’s authoritarianism. In the government, two members of the old guard (GB Henries and R. Grimes) were replaced with two young men (W. Denis and C. Simpson) and H. Fahnbulleh was named there, released along with other political prisoners. Tolbert’s program (confirmed president for the years 1976-84 in the 1975 elections) aims at a wider integration of the population of the interior, in particular through the extension of school structures, and a greater integration of young people into political life and social of the country; in the economic field it has pursued national interests more rigorously, including through state interference; in foreign policy, albeit in the traditional pro-Western orientation (primarily in friendship with the USA), diplomatic relations were also extended in other directions (in 1972 the Soviet embassy in Monrovia was opened and a cooperation agreement with Romania; a trade agreement with Czechoslovakia has been in force since 1975) and good relations with neighboring countries have been strengthened (a free trade area was established in October 1973 with Sierra Leone; in March 1975 Tubman paid a visit to the Ivory Coast).