Lebanon. About 6,000 Syrian soldiers were withdrawn from dozens of military bases in and around Beirut in June. Some of them left the country completely, others were stationed in the Beka Valley or along the road between Beirut and Damascus. The withdrawal was considered to be a remission for the Christian Lebanese who increasingly criticized the Syrian presence in the country. However, more than 20,000 Syrian soldiers remained in Lebanon, many of them in Beirut.

In early August, police arrested 250 Maronite students and politicians who were accused of “damaging their relations with a brotherland”, i.e. Syria, and for insulting President Emile Lahoud. Most were released within a few weeks, but some had to serve shorter prison sentences.

Violent incidents occasionally occurred during the year at the border between Lebanon and Israel. In April, June-July and October, Israeli fighter aircraft attacked Syrian positions in eastern Beka Valley. Israel said the attacks had been caused by guerrilla attacks against Israeli soldiers on a part of the Hermon Mountains occupied by Israel but which Syria and Lebanon regard as Lebanese land and which the UN believes belong to Syria.

Lebanese leaders condemned the terrorist attacks in the United States on September 11, but failed to heed the US call to freeze Hizbullah’s financial assets.

In August, Lebanon’s central government debt was at 170% of GDP, and interest rates alone amounted to 45% of the central government budget. More than a quarter of Lebanese were estimated to live below the poverty line. The explanation was the stalled peace process in the Middle East that made investments fail. In addition, some Lebanese who had previously worked in Israel had lost their jobs.

The Lebanese government collapsed in January 2011 when 10 ministers resigned in protest of Prime Minister Hariri’s resignation from an agreement reached in December 2010 that Lebanon should distance itself from the UN Lebanon tribunal. The tribunal worked to make Hezbollah responsible for the murder of Hariri’s father in 2005. An agreement was reached in December for the government to distance itself from the tribunal, but the United States intervened and forced Hariri to break the agreement because the superpower along with Israel had a agenda to make Hezbollah responsible – in the same way that Israel and the United States in 2005 spread the claim that it was Syria behind the assassination.

The collapse of the government threw Lebanon into renewed political crisis and the prime minister deported the army to patrol in Beirut. Foreign countries had once again interfered with and destroyed the fragile political equilibrium in the country.

In June, she succeeded in forming a new government with Najib Mikati as prime minister. Prior to this had been a complicated government formation that had stretched since January, which both the EU and the US had sought to impede because it gave Hezbollah a prominent role.

On June 30, the UN Special Tribunal for Lebanon (STL) issued arrest warrants against 4 senior members of Hezbollah accused of the 2005 murder of Hariri. The arrest warrant was rejected by the Lebanese authorities. In mid-2010, a major Israeli spy network was unveiled in Lebanon. 70 Lebanese were arrested and some managed to escape to Israel. One of the most prominent spies was Charbel Qazzi, senior manager of the mobile phone company Alfa. He had worked for Mossad for 15 years and had installed Israeli monitoring equipment and computer programs in Alfa. Israeli espionage activities in the mobile phone companies made no Lebanese believe in the STL, which based its charges against the 4 Hezbollah members on clues in the form of cellphone location of the accused during the Hariri murder.

After Israel banned the marking of Nakba in 2011 – the day of ethnic cleansing of Palestinians from Israel in 1948 – the Palestinians demonstrated instead at the borders of Israel. So, too, at the Lebanon-Israel border, where the Israeli military opened fire on the unarmed protesters. 7 Palestinian refugees were killed and 111 injured.

In mid-2011, the civil war in Syria swept across the border with Lebanon. Partly in the form of a growing stream of refugees. Partly in the form of a flare-up of the conflicts between the ethnic and religious groups in the country that either supported the Assad regime or the rebels. In the north of Lebanon, many Allawites live – the same sect on which the Assad family has historically based its power in Syria. At the same time, the northern part houses Salafists, al-Qaeda supporters and other deeply conservative Sunni groups. In June 2011, in Tripoli, armed fighting between Alawaites and Salafists came. Before the Lebanese army had brought the conflict under control, 7 had been killed and 59 wounded. From the beginning of 2012, however, the conflict flared again as intensification of the fighting in Syria and the use of Lebanon as a transit country for weapons to the Syrian rebels. 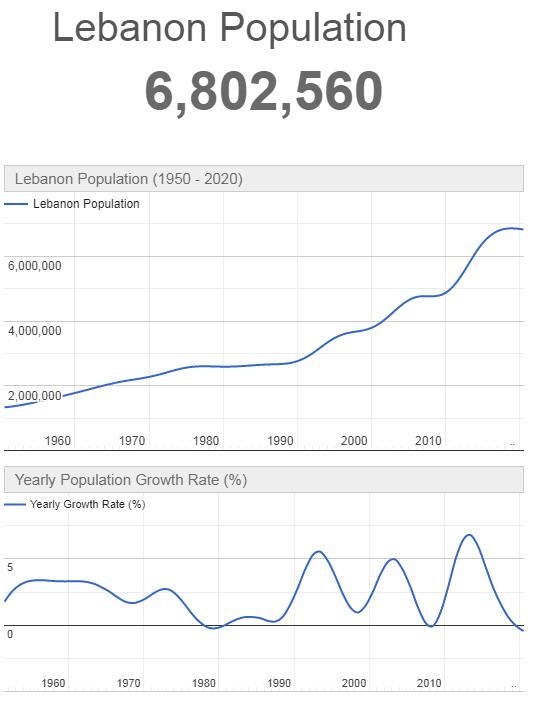