Ivory Coast. Election to Parliament was held in January in areas of the North, where the December 2000 election was boycotted by the Republican Party (RDR) party since its leader Alasanne Ouattara was not allowed to run for office because of his deprivation of citizenship. The RDR continued the boycott and most of the seats were taken by the former ruling party PDCI.

In contrast, the RDR triumphed in the municipal elections in March, when the party took power in 67 of 197 municipalities, twice as many as the ruling socialist party FPI. The election showed that RDR voter support, contrary to most estimates, was not limited to the Muslim northern parts of the country.

The Ivory Coast situation remained tense after years of political and cultural polarization, military rule and riots, which isolated the country financially and brought it into disrepute. The government invited reconciliation talks in the autumn between the country’s leading politicians, but the mutual suspicion was strong and the talks did not produce any immediate results.

In October, 93.4% voted in favor of a new constitution. However, the voting percentage was only 42.4%. The opposition strongly criticized the new constitution, which differed from the previous in a number of points. It was no longer required that both parents of a presidential candidate be Ivorians; a Vice Presidential Office and a Senate made up of former public servants were created; both Vice President and Senate were to be elected by free elections, however, so that the President was entitled to nominate 1/3 of the members of the Senate; finally, the parliamentary term was reduced to 4 years. Up to the referendum, the opposition conducted peaceful protests against the new constitution. The police responded again by arbitrarily arresting 50 politicians,

At the subsequent parliamentary elections in December, the president’s coalition won the Rassemblement des Houphouëtistes pour la demokratie et la paix, RHDP 167 out of the 255 seats of the National Assembly. A decline of 40, but it still reached a majority. The second largest group in parliament with 76 seats was made up of independent candidates.

It was expected that President Ouattara at his party’s RDR Congress in September 2017 would be re-elected as the party’s chairman, but instead Henriette Diabaté was elected to the post. It immediately reinforced the expectation that Ouattara would not run for the 2020 presidential election.

Gross national product (GNP, per resident and year): 1540 US$

Religions: 42% Muslims, 34% Christians (especially Catholics), 4% followers of indigenous religions and others (as of 2006)

Employed by economic sector: No information 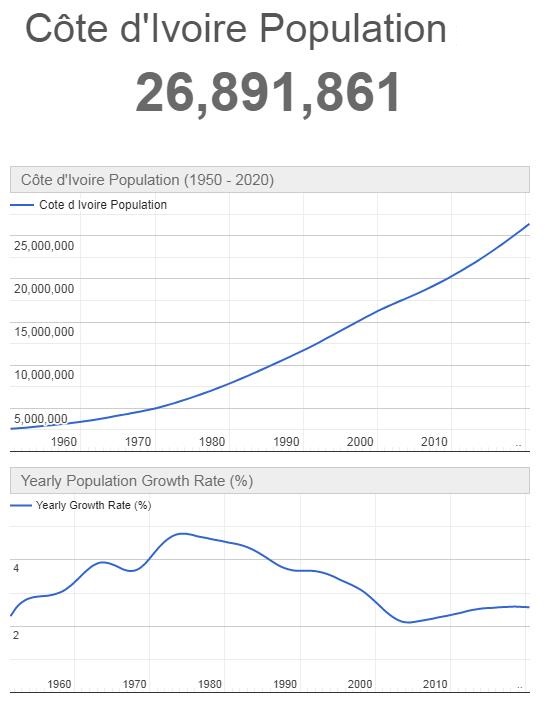