Italy. During the spring, the right alliance, led by media magnate Silvio Berlusconi and his party Forza Italia, emerged increasingly as favorites ahead of the general election to be held on May 13. The alliance with Umberto Bossi’s separatist and xenophobic Lega Nord led the Right to a clear advantage in northern Italy, prompting the ruling center-left coalition with Francesco Rutelli at the forefront to concentrate its campaign to the south. During the election campaign, Berlusconi received criticism for his political interest conflicting with his business empire, which includes the country’s three largest TV companies.

The right alliance convincingly won the general election. In the lower house, the Chamber of Deputies, they won a majority of seats, 368 out of 630, and in the upper house, Senate, 177 out of 315 seats. Berlusconis Forza Italia won almost 30% of the vote. However, Lega Nord succeeded poorer and gained only 3.9%, down from 10.1% at the last election in 1996. The Left Democrats became the second largest party with 16.6%. One consolation for the left, however, was that the mayor posts were maintained in the important cities of Rome, Naples and Turin. Government formation was completed in mid-June. Several controversial appointments by members of Lega Nord were made, including the government’s responsibility for illegal immigration and welfare policy and the Justice Minister’s post.

The G-8 group’s annual meeting in Genoa in mid-July attracted much attention. While leaders of the world’s richest countries were behind a rigorous security raid in Genoa’s barred city center, the so-called Red Zone, extensive demonstrations were held outside. Tens of thousands of people took part in the protests against, among other things, free trade and globalization, and a small hard-line group used violent methods. During the riots, a demonstrator was shot dead by police, over 300 people were injured, including 70 police. 280 people were arrested and material damage to a high value was incurred. However, the G-8 group’s final document stated that the meeting had been a success, despite the demonstrations, the shooting and the material damage. The blame for the shooting was laid on the radical and violent groups among the protesters.

On October 8, a SAS plane collided with a small German private Cessna plan at Milan’s Linate airport. All 114 people aboard the two planes were killed, as were four airport employees. The plane crash was the worst in both SAS’s and Italy’s history.

A bomb detonated in April at the Institute of International Relations in Rome. In the same building was an association that worked to improve US-Italy relations. A left-wing group called NIPR took on the deed that caused material damage but no personal injury. Another bomb exploded in August in a Venice courthouse that Berlusconi would have visited just hours later. Two people were injured in the explosion. Several groups took on the blame, including a group that emerged from the extremist left group Red Brigades. A third bomb detonated later that month at the Lega North premises in Padua, northern Italy. No one took the blame for the act.

The Etna volcano in Sicily erupted in mid-July. The 6,000 residents of the city of Nicolosi on the southern slopes of Etna were threatened by the lava flows. The resort of La Sapienza was destroyed, but no people were injured. After a week, disaster states were declared and the army was deployed to stop the lava flow.

On January 28, Italy’s last queen, Maria José, passed away at the age of 94. She spent her last days in exile in Switzerland. She was the daughter of Belgian King Albert and married in 1930 to the Italian heiress Umberto II who became king in 1946 since his father abdicated. Maria José left Italy less than a month later with her husband. The reason was a rapidly growing dissatisfaction with the court giving its support to the fascists during the Second World War.

On April 21, 1996, the “Olive Tree Coalition” won by the former Christian Democrat Romano Prodi and supported by the PDS parliamentary election. Prodi was named prime minister and formed a government that also included a number of key leaders from the PDS as well as independent conservative politicians such as Ciampi and Dini. The participation of the government of former communists and Rifondazione Comunista’s support for it was a fundamental breach of the political tradition in Italy.

In October 97, a serious crisis shook the government. The Communist Party threatened to withdraw its support for Prodi and refuse to vote for the 1998 Finance Act if the government did not accept a reduction of weekly working hours to 35 hours. The crisis ended in a compromise where the government agreed to reduce the working hours from the current 40 hours for companies with over 15 employees from 2001.

In 1998, the PRC withdrew its support for government because of the new financial law’s social content, preparations for the war against Yugoslavia (the Kosovo crisis) and demanded a change in government composition. The leader of the PDS, Massimo D’Alema, took over Romano Prodi’s government leadership on 21 October with support from new right-wing groups (UDR and others). Carlo Azeglio Ciampi – former National Bank director and financial trustee in Italy – was elected president.

The planned expansion of the Avian base – NATO’s largest in Europe – in southern Italy was surrounded by much debate as a North American aircraft in February 98 killed 20 as it cut the cables to a cable car.

Former prime minister Andreotti was accused in May 1999 by the state attorney for using his political influence to support the mafia. The indictment came at the end of the ongoing case against him, which had already been ongoing for 4 years. State Attorney Roberto Scarpinato demanded that 80-year-old Andreotti, who is a lifetime senator, be removed from public influence. In his final plea, Scarpinato stated that the connection between Andreotti and the mafia had not been “accidental” but that the former prime minister had “regularly done” services for the criminal organization.

The 78-year-old former economist and banker Carlo Azeglio Ciampi won the presidential election in May 1999 with support from both the right and left. Ciampi already won in the first round of elections. This is only the third time in Italy’s history that this is happening. For many observers, the easy victory indicated that the center and center-right parties were willing to participate in reforms of the rigid political system. The presidential post in Italy is predominantly ceremonial, but still gives some power to the president as a mediator during the frequent political crises. At the same time, he decides whether it is appropriate to dissolve parliament and print new elections, while also appointing the one to form a new government.

In early December, the Olive Tree coalition won the 5 local elections. The most important was the election in Bologna, where a replacement for Romano Prodi, who was appointed President of the European Commission, had to be elected. In June, the Left suffered a staggering defeat in Bologna to Berlusconi’s supporters.

On December 22, D’Alema formed his second government – four days after he was forced to resign after losing the support of 3 small factions within the coalition. The new government consisted of 25 ministers – including 6 women. It consisted predominantly of Democratic Party leaders who had been formed by Prodi earlier this year to strengthen the coalition. Socialist leader Enrico Boselli, however, stated that D’Alema had formed a weak government.

In June 2001, Silvio Berlusconi again took up the post of prime minister as leader of a right-wing coalition. In the coalition, the fascists were led by Gianfranco Fini and Liga Norte led by Umberto Bossi. Pro-European Renato Ruggiero was appointed Foreign Minister.

The popular movements grew at the beginning of the 21st century and in particular the anti-globalization movement carried out large demonstrations in Bologna, Trieste and Naples in 2000-01. They culminated at the Genoa Summit in July 2001, when security forces killed one of the demonstrators. The Italian delegations have also been present at numerous anti-globalization meetings outside Italy.

In January 2002, Italy, like 12 other European countries, switched to the euro. The transition was marked by celebrations, which led to criticism from the most right-wing parties in government. Foreign Minister Ruggiero therefore resigned and Berlusconi took over the post of Foreign Minister himself. 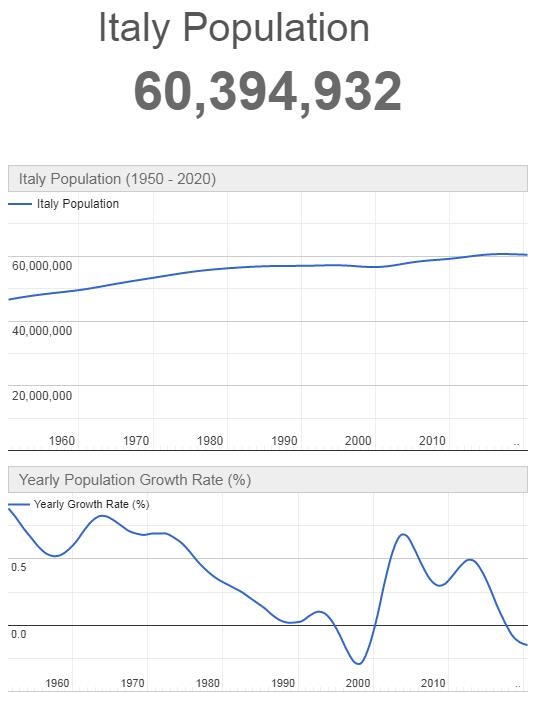