Israel. Ariel Sharon, leader of the Conservative Likud Party, took home 62% of the vote in the extras to the prime ministerial post held on February 6. The election campaign was focused mainly on security issues, notably the incumbent Prime Minister Ehud Barak’s handling of the Palestinian uprising that broke out in September 2000. Leading Israelis with Arab backgrounds urged Arab voters, traditionally loyal to Barak’s Labor Party, to boycott the election. Turnout was record low 62%. Sharon formed a coalition government consisting of Likud, the Labor Party, the ultra-Orthodox party Shas and five other small parties. The Labor Party veteran Shimon Peres was named Deputy Prime Minister and Foreign Minister. Barak resigned after the election from the party leader post.

Despite Sharon’s promises to stop the violence, the Palestinian extremists’ attacks continued both in Israel and against settlements in the West Bank and Gaza. For example, on June 1, 22 Israelis were killed in a blast attack at a Tel Aviv disco and on August 9, 15 Israelis were blown up in the air at a pizzeria in Jerusalem. On October 17, Israeli Tourism Minister Rehavam Zeevi was murdered in a Tel Aviv hotel. It was the first time Palestinian extremists murdered a people-elected Israeli ruler. Israel then, despite US protests, launched the biggest offensive against the Palestinian territories since they were established in 1994. On December 2, ten Israeli youths were first killed in two suicide attacks on a street in Jerusalem and later 15 Israelis in another suicide attack in Haifa. IN. responded with massive bombings and missile attacks against Palestinian targets (see Palestine). The United States then gave Israel its support.

The divide within the government became clear when Peres said on November 15 at the UN General Assembly that most Israelis want to see a Palestinian state in the future, whereupon several of Peres’s government colleagues demanded his departure. Opinion polls showed that two-thirds of Israelis supported Sharon, while only one-third agreed with Peres that calls must be made. Assessors said Sharon’s goal was to oust Palestinian leader Yasir Arafat.

The violence hit the tourism industry hard, while the cheap Palestinian labor force did not appear when Israel blocked off the Palestinian territories. In addition, the general recession in the world affected the export industry. Israel’s GDP fell by 0.6% in the first half of the year compared to the previous year.

A Brussels prosecutor opened a preliminary investigation in July against Sharon, who was charged with crimes against humanity in connection with the massacre of Palestinian refugees in Beirut in 1982. 28 survivors of the massacre had notified Sharon. Belgian law makes it possible to convict foreign nationals for war crimes committed abroad.

78 people, most of them Russian Jews living in Israel, were killed on October 4 when a Ukrainian missile accidentally hit a passenger aircraft on its way from Tel Aviv to Novosibirsk in Russia.

At least 23 wedding guests perished in West Jerusalem on May 24 when a building in which a banquet hall was located collapsed. The breed was due to defects in the building.

While Begin rejected any negotiation with the PLO and declared that Israel would annex the West Bank, the United States persuaded Egyptian President Anwar al Sadat to sign with Camp Begin the agreement in 1978 (signed in Washington, March 26, 1979), paving the way for a peace settlement between Cairo and Tel Aviv and entailed Israeli return of the Sinai desert to Egypt. From that point, international attention gradually shifted from the issue of Israel’s border security to the situation of the Palestinians. With changes in its tactics, the PLO managed to secure new allies and increasing sympathy. That is why Israel’s decision in 1980 to declare Jerusalem for the country’s capital condemned as an arrogant act by even many of the country’s close allies. In June 1982, Israel launched the military operation “Peace in Galilee”, which consisted of invading neighboring Lebanon and ravaging the capital Beirut, on the pretext that it involved maneuvers aimed at curbing the infiltration of Palestinian partisans. Arafat’s forces agreed to leave Beirut against the promise that French-Italian-North American forces would guarantee the safety of the civilian population.

Despite the agreement, thousands of refugees were killed by right-wing militia in the Sabra and Chatila refugee camps in an area under Israeli control and with their approval. The invasion of Lebanon caused so much dissatisfaction in Israel that a demonstration was held with 400,000 people summoned by the “Peace Now” movement. The demonstration led to the setting up of a commission of inquiry that indirectly placed the responsibility for the Sabra and Shatila massacre on Defense Minister Ariel Sharon and other military leaders. Sharon therefore had to resign as minister.

In 1984, the Labor Party, led by Shimon Perez, regained government power, but it did not achieve absolute majority. Therefore, a ministerial coalition was concluded with the right wing and rotation of the prime minister’s office. In 1986, Peres, as agreed, transferred the Prime Minister’s post to Yitzhak Shamir from the Likud Coalition.

In December 1987, there was a clash between young Palestinians in the occupied West Bank and Israeli military patrols. Several Palestinians were killed and the clashes developed into protest demonstrations, prompting new clashes, more deaths, “general strikes” and civilian protests where no one left their homes. In this way, the so-called intifada rebellion – which turned upside down on Middle East policy – was in a way no one had foreseen. Not as an outside event, but as a rebellion from within. Not with weapons, but with stones. In 1989, at the last Palestinian National Congress, the PLO recognized the state of Israel and accepted UN resolutions 242 and 338.

The TV images of a heavily armed Israeli military that attacked young Palestinians armed only with sniper rifles and stones went around the world changing the world view on Israel. The consequence was that 250,000 young Israelis left Israel annually in the late 1980s. The net immigration flow turned out of the country and only stabilized in 1989, when immigrants galore arrived from the Soviet Union. Despite the fact that Israel had been formed for the purpose of stopping the millennial persecution of the Jewish people, since its inception, the state had only been able to attract 20% of the world’s Jews.

Acc. information from the United States amounted to $ 53 billion in assistance from the superpower to Israel in the period 1949-91. Already since the signing of the Camp David agreement in 1979, aid had amounted to 40 billion, or 21.5% of the total North American foreign aid.

In Israel, all men to the age of 51 and single women to the age of 24 are part of the military reserve. The militarization of society is also reflected in the state’s extensive participation in the economy and in the fact that the majority of industrial production is militarily oriented. Based on its extensive development of the military industry, Israel has become an exporter of weapons. This trade has triggered a number of scandals, such as the Iran-Contra scandal, in which Iran was provided with weapons in return for weapons supplies to the counter-revolutionaries in Nicaragua as well as military training of Colombian drug traffickers.

It was a central element of Zionist ideology to create a state consisting of Jews – much like Italy made up of Italians and Japan of Japanese – but the ideology conflicted with reality: territorial expansion. The repeated annexations of land led to about 2 million Arabs living within the borders of the State of Israel. Due. the demographic development would mean that by the end of the millennium, the Arab population would exceed the Jewish one. In March 1990, these fundamental problems and cyclical problems caused the alliance between the Labor Party and Likud to break down. 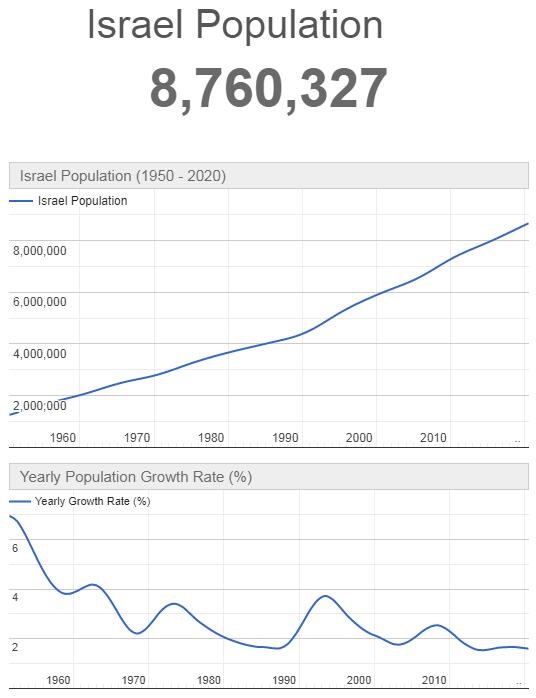