Iraq. US and UK air strikes against Iraqi military targets, especially command centers and air defense facilities, continued throughout the year. In February, targets were attacked near Baghdad, killing three Iraqis. A number of countries, including France and Russia, protested against the attacks.

On June 19, Iraq claimed that 23 young people had been killed when a US or British aircraft dropped a bomb on a football pitch in northern Iraq. The United States and Britain dismissed the information. According to the United States, the Iraqi air defense has improved significantly.

In August and September, the United States lost two unmanned reconnaissance plan over Iraq. In August, new massive attacks against southern Iraq were carried out, and on September 9, targets were attacked southeast of Baghdad, killing eight people.

In June, the UN Security Council also discussed a UK-US proposal for so-called smart sanctions against Iraq. The proposal, due to the problems the current sanctions created for the Iraqi civilian population, would open the possibilities for direct Iraqi food imports while controlling arms imports. would be further sharpened. In protest against the proposal, on June 4, almost all of its oil exports stopped, but since the proposal was tabled after Russian criticism, oil exports resumed.

At the Twelfth Regional Congress of the ruling Bath Party on May 17, Iraqi leader Saddam Hussein was re-elected general secretary of the party. His son Qusay Hussein was elected to the party board and thus got his first official post within the party, which was interpreted as being intended to eventually succeed his father in the presidential post.

Iraq denied all involvement in the terrorist attacks against the United States on 11 September and in the proliferation of anthrax bacteria that followed. But among the population, concern grew that Iraq would be exposed to an American offensive similar to that in Afghanistan.

Iraq’s relations with other Arab countries improved further during the year. In January, Iraq and Egypt signed a free trade agreement. On I National Day in July, Syrian President Bashar al-Asad congratulated his colleague Saddam Hussein for the first time in 20 years, and a month later Syria’s Prime Minister Mohammed Mustafa Miro Baghdad visited. During the summer, the first trains of more than 20 years began to travel the Baghdad-Mardin route in southeastern Turkey.

The human rights organization Amnesty International reported in August that Iraq is the country in the world where most people disappear under circumstances that make it possible to suspect that the regime has had them removed.

But the reality was that the occupying power had massively used the death penalty for the previous 16 months. In late October, the renowned British medical journal, The Lancet, published an article by a group of researchers from the John Hopkins Bloomberg School of Public Health in Baltimore. The researchers had investigated the death rate in Iraq and were able to document that 100,000 Iraqis – predominantly civilians – have died as a result of invasion and occupation during the period March 2003 – September 2004. Most dead are women and children, and most have been killed during bomb attacks, he wrote researchers. The researchers had the Iraqi civilian population at risk of dying 58 times greater than before the US invasion. Prior to the invasion, the main causes of death were heartbeats and chronic illnesses. The Lancet The article emphasized that the number of deaths is based on a projection based on information provided by doctors from across Iraq, and that the number is therefore not exact but subject to uncertainty.

In October 2006, the Lancet published a new article that, based on samples around the country, could demonstrate that in 2003-06, Iraq experienced 654,965 deaths from the war. Of this, the death toll was due to the violence of 601,027. For the vast majority as a result of the use of firearms, although deaths from car bombs are also on the rise. (Mortality after the 2003 invasion of Iraq: a cross-sectional cluster sample survey, The Lancet October 21, 2006).

November 2004. The massacre in Fallujah

Immediately after the US presidential election, the superpower launched a storm attack on the city of Falluja with 250,000 inhabitants. The purpose was to officially crush the uprising against the occupying power. The storm attack was launched with several days of intense aerial and artillery bombardments by the densely populated city that sent half the city’s civilian population to flight. After several weeks of intense terrorist bombings and land operations, the occupation forces managed to occupy the city. 150 US soldiers were killed during the offensive. The civilian casualties are unknown, but must be counted in the thousands and have been compared to the Allied terrorist bombing of Dresden during World War II.

The US storm attack on Falluja in November did not crush the uprising. On the contrary, there was a dramatic increase in the number of occupying forces in the months leading up to the election. The CIA estimates that around 17,000 Iraqis are participating in the occupation against the occupying power, and just as the attack on Falluja did not crush the opposition to the occupying power, the election has not stopped that resistance. A large majority of Iraqis continue to demand that the occupation be stopped immediately. But that’s not what they were allowed to vote on January 30.

After several months of negotiations, in April Parliament elected Kurdish leader Jalal Talabani as new president. He is chairman of a presidential council, which also consists of Sunni Ghazi Yawer and Shia Adel Abdul Mahdi. It is the first time Iraq has a Kurdish president, but his power is severely limited. It is the occupying power that sets the military, political and economic agenda in the country. On the same occasion, Shia leader Ibrahim Jaafari was appointed prime minister.

In October 2005, 79% voted in favor of a new Iraqi constitution involving regionalization of the country. The proposal would have declined if less than 2/3 had voted for it. It was rejected in 3 Sunni-dominated provinces: Salah ad Din, Ninawa and Al Anbar. The national turnout was 63%. There were reports of extensive electoral fraud – especially in the Sunni-dominated provinces.

In December, the first election under the new constitution was held for the 275-seat National Assembly. This year, unlike in January, several Sunni parties failed to boycott the election, and turnout increased to 70% – according to the report. official information. Early reports point to quite extensive electoral fraud and the fact that the religious parties gained around 80% of the vote. The Shia’s United Iraqi Alliance got 41% of the vote, the Kurdish Democratic Patriotic Alliance got 22% and the Sunnis got 15%. 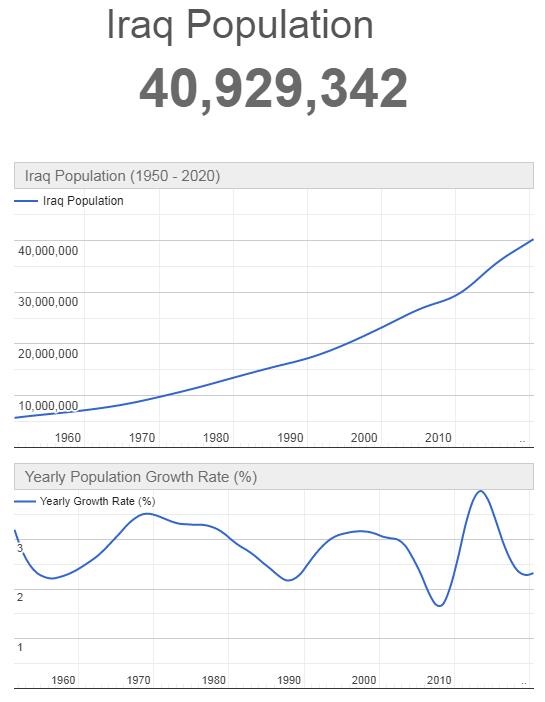