Guatemala. The severe drought that occurred in Central America during the otherwise rainy May-July harvests hit Guatemala particularly hard. Nearly 12,000 farmers are believed to have lost about 80% of their crops.

In the political arena, the year was dominated by the rallies of the Congress President, 74-year-old dictator Efraín Ríos Montt, who was accused of ex-post manipulation of a legislative text approved by Congress at the end of last year. Ríos Montt, along with 23 other members of Congress, were deprived of parliamentary immunity during the preliminary investigation, but in late April the court closed the case in the absence of evidence. Just over a month later, Ríos Montt was reported for participation in massacres of 1,200 Mayan Indians during his time as G’s dictator in 1982-83.

On May 1, a so-called convertibility law was introduced that allows dollars as official means of payment in parallel with the national currency quetzal. This “dollarization”, together with the government’s attempt to raise VAT and introduce new taxes or modify old ones to curb a dramatically increasing budget deficit, led to widespread protests, particularly in the western Totonicapán province.

Congress is withdrawing a controversial budget adopted this week and announcing it will not be sent to the president for signing. The budget passed by Congress provoked widespread protests. During the weekend, the congress building was stormed by protesters who smashed furnishings and set parts of the building on fire. According to the opposition, the government prioritized large infrastructure projects through the budget that would go to companies with government contacts, while ignoring the economic and social consequences of the pandemic. Criticism has also been directed at cuts in education and healthcare.

Vice President Guillermo Castillo calls on President Alejandro Giammattei to resign, along with himself, “for the good of the country”. The reason is the budget that Congress adopted two days earlier and which sparked widespread protests. The budget is the largest in the country’s history and includes major investments in infrastructure projects. Critics point to large social needs in the country, where half of all children under the age of five are malnourished, and to a third of the budget being based on loans. Tensions between the president and his vice president have been reported in the past. Castillo reported as early as May that the two had clashed privately over the handling of the corona pandemic.

Another hurricane pulls in

Hurricane Iota pulls in from the Caribbean, just two weeks after the previous hurricane, Eta, during what has been a record year for the number of named tropical cyclones in the Atlantic. Iota is also the first to reach category 5, the highest on the scale measuring hurricane strength. Eta, which also affected Central America, was a Category 4 hurricane. The two hurricanes have affected millions of people, mainly in Guatemala, Nicaragua and Honduras. Tens have died, hundreds of thousands have been driven from their homes, and major damage has been done to buildings, arable land and infrastructure. 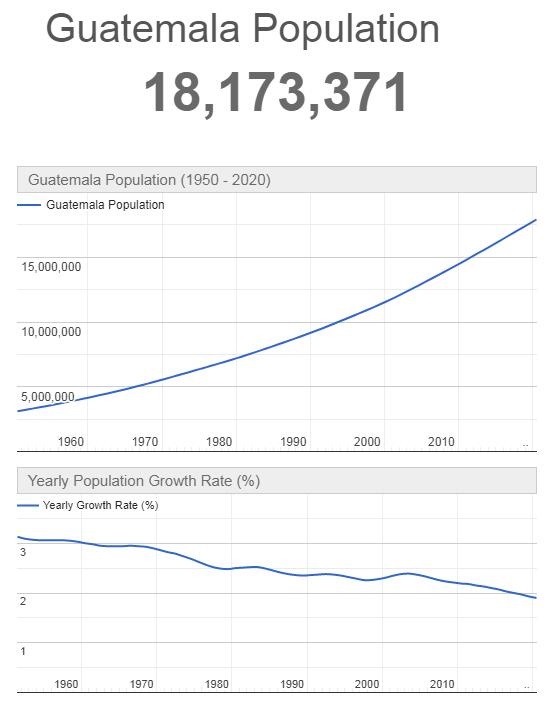 At the 1981 census the population was 6,054,227 residents; but on this official source one cannot help but be perplexed, since already at the end of the seventies various estimates provided figures exceeding 7,000,000. More recent estimates (1987 and 1991) give values ​​ranging between 8,500,000 and 9,500,000. If these values ​​are accepted, the current density would be approximately 87 residents / km 2, with great differences between the various parts of the country. The birth rate is still very high (about 38.6 ‰). The capital’s population is over 1 million. in the municipality (1991); but today at least 2 million people live in the metropolitan area as a whole: Guatemala is therefore the largest urban agglomeration in Isthmian Central America, an agglomeration that has grown chaotically, with serious problems of crowding and environmental degradation.

Economic conditions. – Guatemala largely retains the character of an agricultural town. The active population in agriculture is still more than 50% of the total active one. Coffee cultivation remains by far the most important (2.2 million q in 1991), also for export; that of cane in 1991 supplied almost 10 million q of sugar, that of banana 4 million q of fruit, that of cotton 600,000 q of seeds and 380,000 q of fiber. The cattle herd amounted, in 1990, to 1.8 million head. The land structure remains very unbalanced, characterized by the centralization of a large part of the land in the hands of a small number of families and by the coexistence of large estates and microfunds: farms with an area greater than 45 ha are just 2% of the total, but they cover more than half of the area used in agriculture.

Electricity production more than doubled during the 1970s and the first half of the 1980s (785,000 kW of installed power and 1,785 million kWh of energy produced in 1988), although the lake refurbishment project was abandoned. Atitlán. Among the mineral resources oil has good prospects, especially in the northern part of the country: the quantity extracted is still modest (200,000 tons in 1988), but already contributes to exports. The processing industry, in which the food and textile sectors predominate, absorbs 21% of the active population and is concentrated for about 3/4 in the metropolitan area of ​​the capital, urgently posing decentralization problems. Export, to which mainly coffee and then cotton, sugar, bananas, meat, oil, it is directed mainly to the United States, to the neighboring Isthmian countries (in particular El Salvador) and to Germany; imports come mainly from the United States and other Latin American countries. In 1991 the Guatemala was visited by 508,500 tourists.

The persistent demographic increase, the high percentage of illiterate people (45%, very high among the Amerindians), the high infant mortality (55ı according to official figures, but much more according to other sources), the accentuated social and territorial imbalances, dependence on foreign capital, the low gross national product per capita (900 US dollars in 1990) make Guatemala a very problematic country, destined to still encounter serious difficulties in the immediate future.