Ghana. The newly elected President John Kufuor took office in January. He immediately struck a bitter tone, explaining that the tough economic situation would require sacrifices by the people.

After only a month, he dismissed the sports minister since he lost a $ 45,000 cash portfolio, which the football team would receive if it won a World Cup qualifier.

In a gesture intended to bridge more than 20 years of masked military rule, Kufuor promised that the remains of eight generals executed in 1979 would be unearthed and buried. The generals, including three former presidents, had been executed on orders by Kufuor’s predecessor Jerry Rawlings.

The army also highlighted that Rawlings epoch was definitely over by pronouncing unreserved support for Kufuor and withdrawing Rawling’s military bodyguard.

Gross national product (GNP, per resident and year): 1490 US$

State and form of government
Constitution of 1993
Presidential republic (in the Commonwealth)
Parliament with 275 members, election every 4 years
Direct election of the head of state every 4 years (one-time re-election)
Suffrage from 18 years of age

Employees by economic sector: no information

Unemployment (in% of all economically active persons)
no information

Ghana is a tropical country, so it has no seasons, but an alternation between rainy and dry seasons. Almost equally long days and nights determine life.

The climate in the humid south with its evergreen rainforest areas can be roughly distinguished from the drier north with its tree savannah, shrub savannah and grass savannah in the northernmost part. The harmattan, a trade wind blowing from the northeast, determines the dry season between November and February.

The rains in the rainy season come from the West African monsoons. Most of the precipitation falls in the extreme southwest of the country on the coast (over 2,000 mm per year). The annual rainfall is around 1,000 mm in the north and up to 2,200 mm in the western coast near the city of Axim. In the capital Accra, it barely reaches 800 mm. 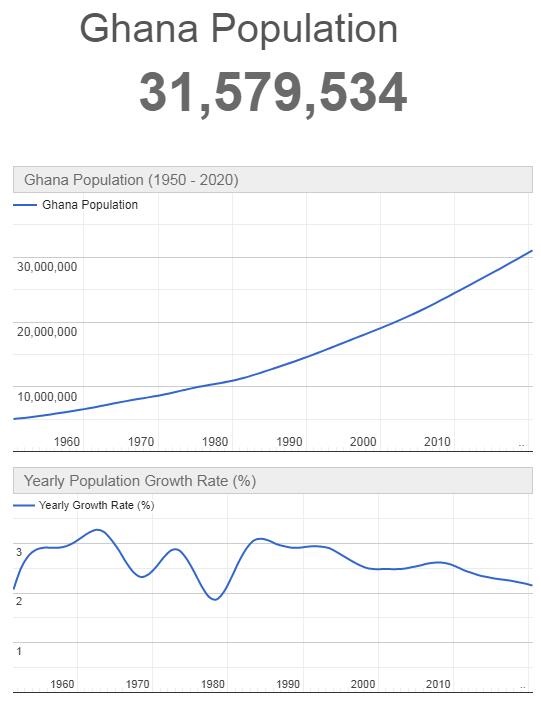