Chad. The year began with fierce fighting between the government army and guerrilla groups in northern Chad. The guerrilla movement MDJT claimed that in a few weeks, 413 soldiers had been killed and, according to the government, more than 120 rebels had lost their lives. President Idriss Déby said that for a few months the war cost the equivalent of SEK 240 million, which was taken out in advance on expected oil revenues. The World Bank accused Déby’s regime of having also used aid to the military, which was denied by the finance minister.

In the May presidential election, Idriss Déby was awarded just over 67% of the vote. The six opposition candidates accused him of cheating, but international observers said the election seemed to have gone right. The six were arrested by police, released shortly and arrested again after calling on supporters to attend the funeral of a young opposition activist who was killed. They were then charged with kidnapping. The politicians were released when the general strike threatened. During the year, Amnesty International criticized Chad’s regime for serious human rights violations.

In September, the drought-stricken Chad experienced its worst rainfall in 40 years. Many clay houses were washed away and at least ten people were reported killed.

Chad is one of the poorest countries in the world, but large oil reserves have been discovered in the south and oil exports are expected to start in 2003 through an oil pipeline being built on the Cameroon coast. 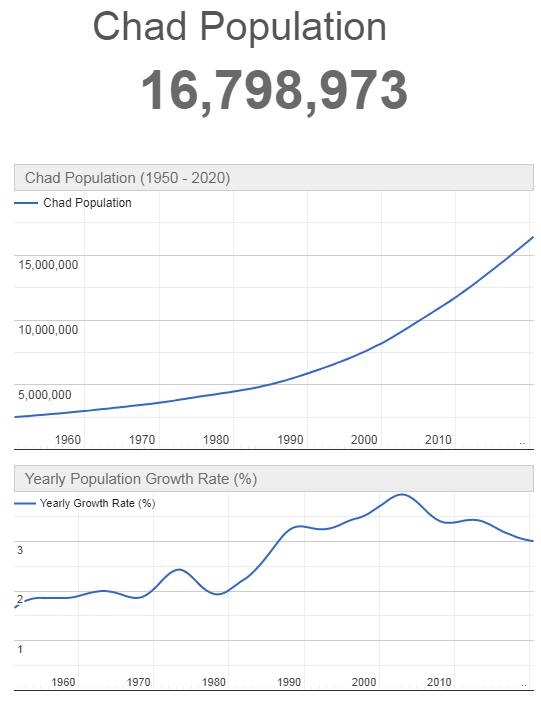 According to official estimates, the Chad had 7.3 million residents in 1998. The still very high rate of population growth (25 ‰) exposes the country to the dramatic consequences of overpopulation. In the last twenty years, birth rates have remained unchanged (43 ÷ 45 ‰ per year), while mortality rates tend to decline slightly (18 ‰ annual average in the period 1990 – 95): the country has not yet passed the acute phase of the demographic transition and, barring anomalous and unlikely events, the overall population will increase significantly in the coming years, with serious repercussions on the prospects for economic growth. The distribution of the population is always very irregular: the greatest densities occur in the southern part of the country (average of over 25 residents / km ², with peaks of 50 ÷ 60), which enjoys the best climate. The capital, N’djamena, had 531,000 residents in 1993.

Chad is among the poorest and most backward countries on earth; almost the entire population lives on a stunted agriculture that provides a product much lower than food needs. Even in the absence of reliable estimates, it can be assumed that at least 50% of the total population does not exceed the poverty line. The country has very difficult environmental conditions: the northern section is desert, the remainder is subject to a substantial risk of desertification. Here the climatic anomalies of the 1970s and 1980s had catastrophic results. The arable areas (less than 3% of the total surface) are of very low fertility: for each hectare cultivated, yields of 5 q of millet and 8÷ 9 q of corn. The climate of political instability that has characterized the region for some time contributed to make the growth prospects more uncertain. The conflict with Libya and the persistent internal conflict have prevented the country from promoting an effective policy in favor of development, so that the Chad still has an economy on the verge of subsistence and its per capita income (240 dollars in 1997) it ranks among the lowest in the world.

The production potential is anchored in the primary sector which accommodates over three quarters of the workforce and contributes more than 40 % to the formation of the gross domestic product. The only activities capable of overcoming local demand are the processing of agricultural products and are located in the capital, where informal activities are also widely present.

Geographical isolation and the internal political situation have exacerbated the country’s problems, and the positive effects on cotton and livestock exports caused by the devaluation of the CFA franc (January 1994) quickly faded away. Despite the significant decline in production due to the civil war, cotton remains the dominant industrial product, but its modest yields are too conditioned by climatic cycles and fluctuations in international prices. Livestock farming also retains an important role, despite having been damaged by the drought of the 1970s and 1980s: the animals have been decimated, the traditional farming areas, located in the central area of ​​Chad, have been abandoned and the herds have they are slowly moving further south. The campaigns for the exploration of the subsoil have resumed. Discrete oil finds have been reported in an area north of Lake Chad (Doba basin). Prospecting, suspended several times due to the lack of safety factors for the foreign technicians who conducted them or due to the country’s inability to purchase the necessary plants, they have given good results and agreements for the construction of an oil pipeline have already been signed. mining area will lead to the port of Kribi, Cameroon, for export. The entire project, which also includes the construction of a refinery near N’djamena, will be financed by the World Bank and the African Development Bank.

Mining is currently limited to the extraction of sodium carbonate, found on the northern shores of Lake Chad, partly used locally and partly exported to Nigeria. It should be noted the presence of other minerals (gold, tin, uranium, bauxite) located in the northern part of the country, of which neither the size of the reserves nor the actual commercial value are known; therefore, the prospects for their use are not immediate. The manufacturing sector contributes one sixth to the formation of GDP and is mostly concentrated in the southern section of the country; has some small businesses in the food (sugar, beer) and textile (cotton) sectors. There is also modest craftsmanship.

From abroad, Chad imports food products and oil; exports cotton and livestock. The foreign debt, especially if placed in relation to the actual economic capacities of the country, is very significant.