Bahrain. Women in Bahrain were able to go to the polls on February 14-15 for the first time in the country’s history. They participated in a referendum – the first in the country since independence in 1971 – to democratize the country’s constitution. Over 98% of those entitled to vote voted in favor of the establishment of a party-based and directly elected parliament, as well as the establishment of an independent judicial system and freedom of expression and religion. The country’s Shiite opposition, which represents the majority of the population, backed the proposal after Emir Hamad ibn Isa al-Khalifa had promised an amnesty for those imprisoned in the 1990s for breach of national security. Hundreds of prisoners were released in February and over 100 exile Bahrainians returned to their homeland.

After the terrorist attacks against the United States on September 11, Bahrain went through a particularly difficult balancing act as the country houses the US port of the US Navy. Bahrain agreed to freeze the assets of organizations and individuals designated by the United States as terror suspects. At the end of December, Bahrain’s only frigate and its 240 crew members also joined the US-led anti-terror coalition.

Bahrain’s border dispute with Qatar was resolved on March 16, when the International Court of Justice in The Hague granted Qatar sovereignty over the city of az-Zubara and a strip of land in the northern part of the country. Bahrain was granted sovereignty over the Hawar Islands, including the reefs Diba and Jarada. Both parties said they were satisfied with the outcome. 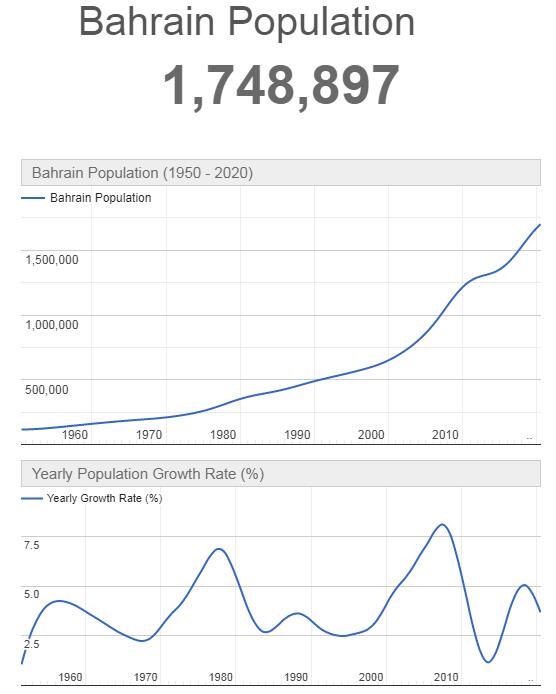 Demography and economic geography. – Island state located in the Arabian Gulf, between Saudi Arabia and Qaṭar. The attraction exercised by industries has led to a massive and growing foreign immigration, which came to represent more than half of a population of 1,344,111 residents in 2014 (according to an estimate by UNDESA, United Nations Department of Economic and Social Affairs), which has almost doubled in the last decade. The Bahrain continues to diversify its economy, although most of its exports are still linked to oil (77% in 2013), in addition to discrete gas reserves and more traditional fishing activities, especially pearls. The development of the chemical, petrochemical, metallurgical and shipbuilding sectors has received further impetus, which guarantee a growing industrial production (4.7% in 2013). Of note is the Sitra refinery, one of the largest in the Near East. Its development as an Islamic financial center and tourist center is significant.