Azerbaijan. In January, Azerbaijan and neighboring Armenia were admitted at the same time as members of the Council of Europe. In the spring, Azerbaijan President Gejdar Aliyev and Armenian President Robert Kotjarjan met in the United States for talks on the Armenian breakaway piano Nagorno-Karabakh. Azerbaijan demands to regain power over the enclave, which Armenia opposes. The talks were unsuccessful and during the summer, Azerbaijan’s defense minister accused Armenia of military armaments at the border. Russian President Vladimir Putin visited Azerbaijan during the year and offered some military cooperation. Azerbaijan has previously accused Moscow of standing on Armenia’s side.

In April, police took action against demonstrative oppositionists in the capital Baku and according to the opposition, hundreds of people were arrested. In July, multi-year prison sentences were sentenced to a group of oppositionists for a demonstration the year before. The opposition labeled the convicted as political prisoners. During the year, Azerbaijan received criticism from, among other things, The United States for Human Rights Violations and Critics argued that Azerbaijan’s membership of the Council of Europe legitimizes a single regime.

In the summer, Azerbaijan ended up in diplomatic conflict with Iran over the search for oil in the Caspian Sea, after Iranian naval vessels and Iranian military aircraft forced Azerbaijan vessels to leave disputed waters.

On August 1, Azerbaijan formally replaced Cyrillic writing with the Latin alphabet. Cyrillic writing was forced into the country in 1939 by the Soviet dictator Stalin; the new writing reform was part of the quest to bring Azerbaijan closer to the western world. The country’s schools have been teaching the Latin alphabet since 1992. At the end of the year came several reports about the regime’s attempts to stifle press freedom. Journalists demonstrating in Baku were dispelled with violence by the police. Council of Europe.

The government imposes martial law and a night curfew in the capital Baku and other cities after fighting broke out with Armenian separatists in the disputed Nagorno-Karabakh region, which is in Azerbaijan but controlled by Armenia. Both sides accuse each other of having started the fighting and of attacking areas with civilians. The outside world calls for reflection, but the fighting continues and after four days has claimed the lives of around 100 people on the Armenian side, of which just under a fifth are civilians. Azerbaijan reports no losses. Armenia accuses Turkey of interfering in the conflict on Azerbaijan’s side and of shooting down an Armenian plane, which Turkey denies. The fighting is the most serious confrontation between Azerbaijan and Armenia since 2016. 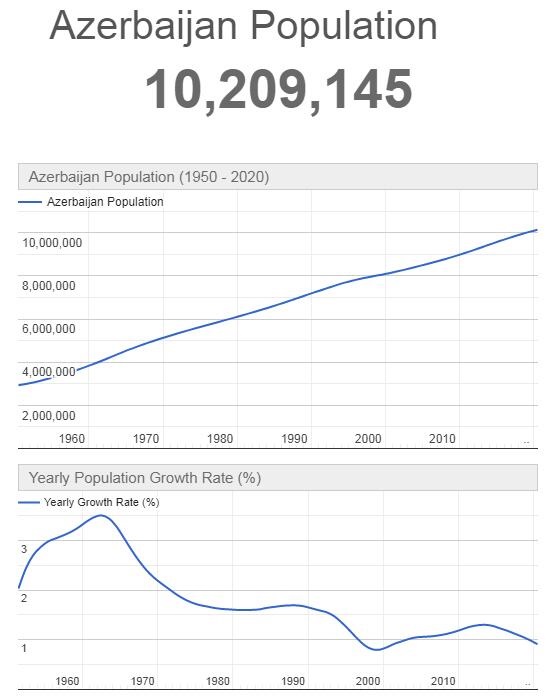 The population of Azerbaijan is quite homogeneous: about 90% of it is of Azerbaijani ethnicity, while the remaining 10% is mainly composed of Lesbians, Russians and Armenians. A substantial confessional homogeneity corresponds to ethnic homogeneity. Almost all of the population is of Muslim faith, with Christian-Orthodox, Gregorian and Jewish minorities.

With around 80% of Shiite Muslims, Azerbaijan is one of the few countries, along with Iran and Iraq, in which Shiites represent the majority of the population. A seventy years of Soviet domination and the firm state control over religious activities have nevertheless rooted a profound secularism in the institutions and the population. Although the Azerbaijani authorities have highlighted the risk of infiltration by Islamic fundamentalists from Dagestan and other Caucasian republics, religion remains a marginal factor in the country’s political dynamics.

Relevant is the extent of the Azerbaijani diaspora in the world. In addition to the Azeris based in northern Iran (estimated between fifteen and twenty million individuals), significant communities are present in Russia (over two million), Turkey (about one million), North America (400,000) and Europe (300,000).

The Azerbaijani democratization process is severely limited both by institutional dynamics and by the insufficient guarantee of civil and political rights. The practice of intimidation and arbitrary arrests of journalists, as well as members of the opposition, is quite frequent. According to the Freedom of the Press Index drawn up annually by Freedom House, Azerbaijan in 2014 was ranked 188th out of 197 countries. A trend, that of the repression of dissent and systematic control of the media, which has increased especially in the phase following the wave of the ‘color revolutions’ which between 2003 and 2005 affected the post-Soviet space, threatening to spread also to the country.