Austria. In February, a year had passed since the newly-appointed government was quarantined by the EU. It was dissolved in a fog cloud in October, and after a year in government, the coalition between the Conservative People’s Party ÖVP and the right-wing populist FPÖ could see the future with some confidence. See shoe-wiki.com for Austria economy.

After the first year in power, the government, under the leadership of the ÖVP’s Wolfgang Schüssel, was able to reap praise for political renewal, while the FPÖ’s previously so successful leader Jörg Haider worked frantically without much political success to get back into the limelight. But both Haider and the new leaders in the party he made with such success to the country’s second largest in the 1999 election increasingly realized that for FPÖ there was only one thing to do if the party did not strongly decline in the opinion polls: stay in the government and contribute to the success of the blue-black coalition.

In March, this was even clearer if possible. At the local elections that were held in Vienna, FPÖ went back big. The party lost a quarter of its voters. Instead, for the Social Democrats (SPÖ), the election went so well that the party gained its own majority in the capital. It was interpreted as a powerful popular protest against the blue-black Austrian government. Instead, the government chose to officially interpret the election result as a local matter for Vienna.

During the year, the government continued the privatization previously initiated. The telecommunications sector was exposed to competition and the gas and electricity markets were opened to competition before other EU countries.

At the end of the summer, FPÖ’s profile issues received a proposal for a severely limited immigration to the country. The party also learned that the country should wait until 2007 before a possible eastward enlargement of the EU will have an impact on the free movement of labor.

Perhaps the most important issue for the future during the year was the crucial social partnership, ie Austrian political life. that the country’s economic policy was, in practice, determined by the Austrian LO, the employers, the Chamber of Commerce and the farmers’ union, got such a serious thorn that it can be difficult to restore it in the future.

At the end of the year, Jörg Haider obtained a referendum in the country to be held in early 2002 for or against the demand that the Czech nuclear power plant in Temelin be closed. If it became a success for Haider, it would probably push Austria towards a new isolation within the EU, something the FPÖ has long strived for.

Government work was already bursting in 2008 and in the new election held that year, both SPÖ and ÖVP declined, while support for both the Greens (Die Grünen) and FPÖ and Haider’s new populist party Austria’s future (Bündnis Zukun Österreich, BZÖ) increased. Since SPÖ refused to cooperate with FPÖ and BZÖ, under the leadership of Werner Faymann (born 1960), they continued to rule in coalition with ÖVP. Shortly after the election, Jörg Haider died in a car accident.

In 2008, the country was shaken by a notable case. Josef Fritzl (born 1935) in Amstetten was arrested after it was discovered that he had kept his daughter prisoner in the basement of the family’s house for 24 years. There, her daughter, who was 18 when she was locked up, was subjected to repeated abuse by her father and gave birth to seven children, one of whom died at an early age and three never left the basement. The other three had grown up with Fritzl and his wife. In 2009, Fritzl was sentenced to life at a forensic psychiatric institution. The Fritzl case was revealed only two years after the then 18-year-old Natascha Kampusch (born 1988) managed to escape after being jailed for eight years in a house in Strasshof outside Vienna; perpetrator Wolfgang Přiklopil (1962–2006)), who kidnapped Kampusch when she was 10, committed suicide since she managed to escape.

In January 2013, the first nationwide referendum was held in the country. It concerned a proposed liquidation of the general military duty, which SPÖ advocated. However, 60 percent of voters voted to retain it. SPÖ and ÖVP listed new ground notes in the 2013 parliamentary elections, but remained the two largest parties and continued to rule together.

The refugee crisis in 2015 has helped to make immigration policy one of the dominant issues. The problem of human smuggling was attracted great attention after 71 refugees were found dead this year in an abandoned truck near the border with Hungary. The government’s previously generous attitude towards refugees led to widespread public dissatisfaction, not least in the countryside, and caused Chancellor Faymann to change line. FPÖ’s immigration critical candidate Norberg Hofer (born 1971) was close to winning the 2016 presidential election but was eventually defeated by Alexander Van der Bellen, supported by the Greens.

In the spring of 2017, contradictions between SPÖ and ÖVP led to the latter leaving the government. In connection with this, Foreign Minister Sebastian Kurz took over the party leadership in the ÖVP. He led the party to victory in the recent election held in October of that year and then took the seat of the country’s youngest Chancellor to date. ÖVP chose to form government together with FPÖ.

In May 2019, a sneakily recorded movie from 2017 was published in which FPÖ leader Heinz-Christian Strache (born 1969) and a woman who claimed to be related to a Russian oligarch discussed how FPÖ could be supported in the upcoming election against promises of future government business contracts. Strache resigned as vice-chancellor and party leader and FPÖ left the government. After a vote of no confidence in Parliament, Kurz and his government were also dismissed.

New elections were held in the fall of 2019. The result showed continued support for Kurz’s ÖVP, which received about 38 percent of the vote. The Greens also received increased support (about 12.5 percent), while voters’ sympathies for the Social Democratic Party as well as the right-wing nationalist FPÖ declined. Three months after the election, in January 2020, the country’s first government coalition consisting of ÖVP and the Greens (Die Grünen) was formed.

Police crack down on suspected neo-Nazis and seize automatic weapons, explosives and drugs. Five people with ties to neo-Nazi groups were arrested. In November, the police arrested 40 suspected neo-Nazis who were accused of spreading Nazi ideology on FaceBook and in the Whatsapp app, which is prohibited by Austrian law.

The Constitutional Court rejects the law passed by the parliament in 2019, which prohibits students under the age of 10 from wearing a veil at school. According to the court, the law is discriminatory and contrary to the constitution as it goes against the principle of equality with regard to religious freedom. The text of the law does not explicitly prohibit Muslim veils but speaks of “ideologically or religiously influenced clothing” intended to cover the head, but according to the court it is clear that it is veils for Muslim girls that are meant. 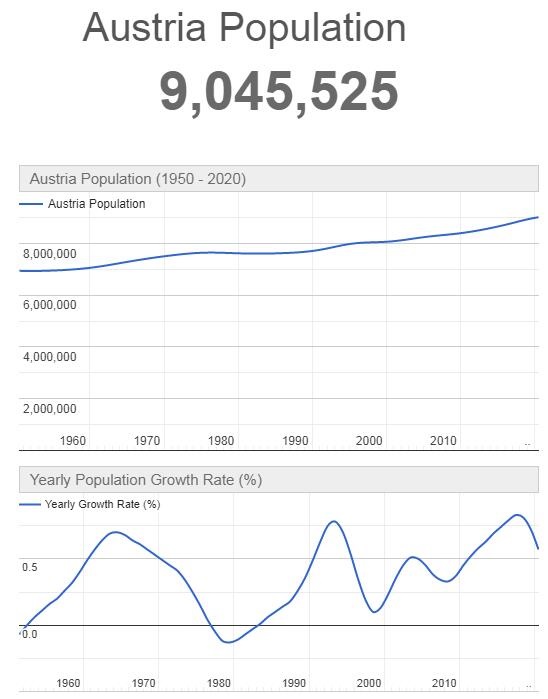