Algeria. Clashes between Berber activists and security forces erupted in mid-April after a gendarme in the Kabylia province in northeastern Algeria shot dead a young Berber who had been arrested for theft. The shooting resulted in the gathering of 100,000 Berber in protest demonstrations, which the police violently dissolved. At least 60 people were killed in various rattles. On October 4, the government reversed its historic record and recognized the language of the Berbers as one of the country’s official languages. The government also announced that the police involved would be brought to justice. The victims and their relatives were promised damages.

The clashes between Islamist militia groups and government troops also continued during the year, as did the attacks against civilians. For example, at a wedding party near Algiers in late September, 22 people were killed. The attackers were believed to be militant Islamists, possibly from the GIA (Groupe Islamique Army, ‘Armed Islamic Group’).

On May 28, 21 independent newspapers filed their editions in protest against the tightening of the penal code, which meant higher fines and longer prison sentences for the responsible publisher of articles that offended the president. Following the terrorist attacks in the United States on September 11, the Algerian government gave the United States full support in the fight against terrorism. Algeria was also reported to have given the United States a list of 350 Algerian militant Islamists in exile who were said to have links to terrorist suspect Usama bin Laden. Algeria and Russia signed an agreement on military cooperation at the end of May for the next ten years.

At least 730 people were killed when Algeria suffered severe flooding in mid-November. The floods were made worse by the fact that the authorities had replenished many stormwater wells so that terrorists could not hide in the city’s sewerage system. 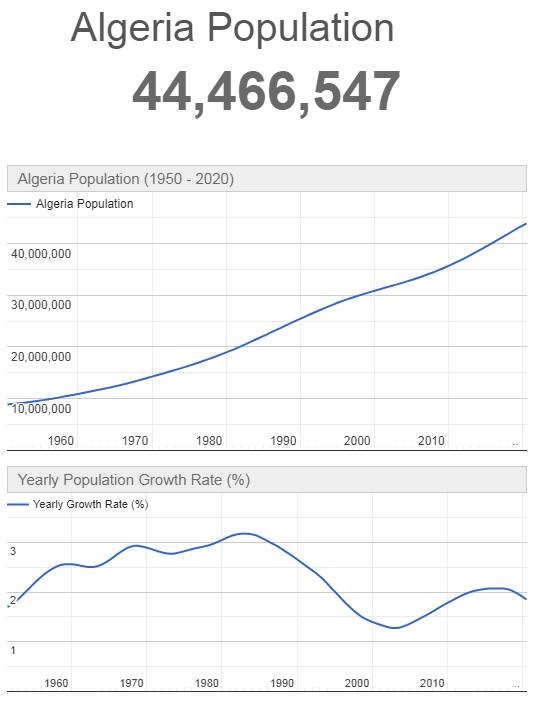