Albania is one of the most unknown travel destinations in Europe. The country became almost completely isolated from the outside world during the post-World War Cold War. Almost half a century of isolation preserved the country in many ways as a non-highway travel destination.

Albania. At the beginning of the year, the two largest parties, the Socialists and the Democratic Party PDS, agreed on a code of conduct for the June and July parliamentary elections. The electoral movement also became the most peaceful after the fall of communism. In particular, it was noted that the PDS leader and former President Sali Berisha, whose party formed an alliance with three other opposition parties, abstained from confrontational politics. But when it became clear that the socialists had won, he refused to accept the result. The Socialists returned slightly compared to the 1997 elections, but retained their majority. The party received 41% of the vote and 73 of the 140 seats in Parliament, which was reduced from the previous 155 seats. Prime Minister Ilir Meta formed a new government in early September. The Democratic Party and its allies boycotted Parliament when it rallied.

Gross national product (GNP, per resident and year): 4320 US$

State and form of government
Constitution of 1998
Parliamentary secular republic
Parliament (Kuvendi i Shqipërisë) with 140 members, election every 4 years
Election of the head of state by parliament every 5 years (single re-election) Right to
vote from 18 yrs.

In Albania there is a subtropical Mediterranean winter rainy climate (Mediterranean climate) with an annual average temperature of 16 ° C and an annual total rainfall of almost 1200 millimeters. 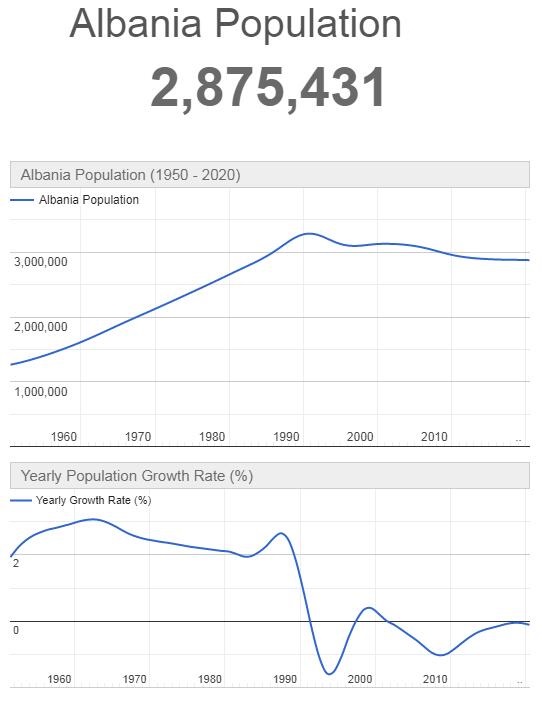